C-152 carb heat on before landing in hot weather?

I know the POH for the C-152 explicitly states carb heat should be applied before landing. I fly in a tropical country where temperature is at 30°C on average on the ground, twice the standard temp. Airports I frequent have an elevation at 300' the most. Cruising altitude on most days is between 2500-3500'.

Should I still treat the POH as the bible in this situation, or will the 30°C qualify as an exception?

You should always pull the carb heat when throttling back no matter the conditions for 3 reasons:

It's worth reminding as well that icing can happen in cruise as well, so keep in the habit of applying carb heat regularly.

Carb heat use is not related to OAT, it's related to moisture and how it can turn to ice in the carb, causing the engine to stop. Carb ice can form at any outside air temperature, which is why you will not find any checklist or POH item for an aircraft with normally aspirated engines telling you to check OAT before activating carb heat. You just do it. I learned to fly on a Caribbean island and I got taken to task by the instructor if I ever dropped power to descend and forgot to turn on carb heat. This does not, however, apply to fuel-injected engines. 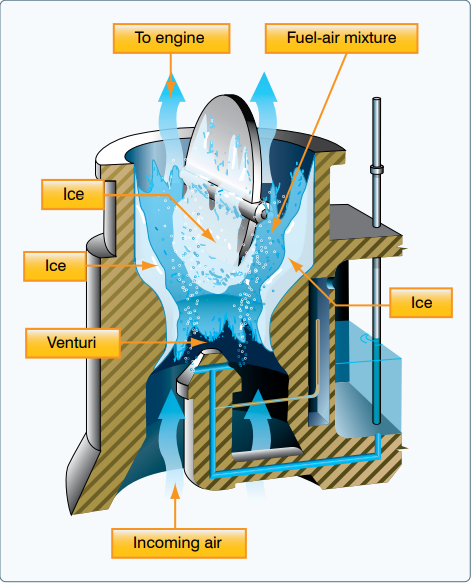 You have mentioned OAT, but remember there are 2 variables for potential icing - the other being Dew Point. You (roughly) 85F OAT could easily fall into Serious Icing at glide power for a wide range of dew points.

Thou shalt use Carb Heat.

You said you fly in tropical area where the temperature is 30°C.

Note: From experience, when the conditions are just right, the carb ice forms within seconds.

Always use carb heat on landing when you go below the green arc on RPM (or as indicated in the POH).

(I don't have the source handy, but I remember reading that warmer ambient temps are actually more conducive to carb ice than very cold ambient temps. If I find the source I'll link it.)

Most of the temperature drop is from fuel evaporation downstream of the venturi, causing ice from ambient humidity to form on the throttle plate (injected engines also have venturis and throttle plates for fuel and air metering, but because no fuel is being introduced there, so there is no evaporative cooling, there is no need for carb heat and they just use an alternate air source in case of main intake obstruction from other causes).

So it's somewhat less likely when it's that hot outside, but can still happen and unless you have a carb air temperature gauge that you trust, this is something you don't screw around with and you follow the normal carb heat protocol regardless.

There is a similar situation with the engine itself. Lycomings are somewhat less prone to carb ice than Continentals because of the way the carburetor connects to the engine (the Lyc carb gets more conducted and radiated heat from the engine because the intake spider runs through the sump, so its body is slightly warmer than a Cont's), but they can still get ice and you follow the same carb heat procedures on either engine regardless.

Not the answer you're looking for? Browse other questions tagged piston-engine cessna-152 carbheat or ask your own question.

9
What can I do if my carb-heat cable breaks in-flight?
13
Why does manifold pressure increase when you turn on carb heat?
10
Why is full carb heat recommended when reducing power below normal setting?
8
In which phases of flight should the carb heat be turned on?
15
Should I have carb heat on for landing in a C152?
15
How does carb heat increase the risk of dirt ingestion?
3
Why isn't the application of "carb heat" in initial piston multi-engine failure emergency procedures?
1
Carb Heat and Lycoming Engines
1
Why do we check Idle operation with carb heat on during a Cessna 172 run-up?