Would adding a slat and a slotted flap increase the max CL of a multi element airfoil to 6.5?

Would adding a slat and a slotted flap increase the of a multi element foil to 6.5?

I understand, as a general rule, the max $C_L$ for a classic NACA airfoil is as follows:

But with a Selig multi-element foil, the starting max $C_L$ is around 4.5.

Here is a pic of the foil: 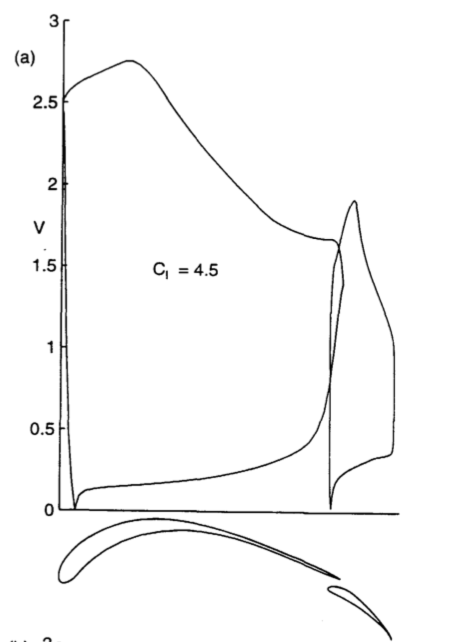 The theoretical maximum lift of a cylinder is 4π. At that point the forward and rear stagnation points coalesce on the bottom of the cylinder. Practical solutions use rotating cylinders (Flettner rotor) but will not reach this theoretical limit.

This should illustrate that 6.5 is not outright impossible but the distance between a cylinder and an airfoil is quite large, so this theoretical limit does not apply to airfoils.

Adding a slat and a slotted flap to a regular airfoil will bring you at most to a c$_{l_{max}}$ of 2.8. Now you want to add them to a multi-element foil. Would that be several slats and flaps in sequence? Practical solutions use a single slat and a multi-slotted flap where the deflection angle of the single flap elements increases along the flow path of the air. A typical example would be the airfoil of the Boeing 727 which had a triple slotted flap which could reach a two-dimensional c$_{l_{max}}$ of 4.2 with 60° deflection and rearward movement of the flaps which increased the effective wing area. Note that wing sweep and ailerons reduced the practical maximum lift coefficient of the full aircraft to 3.0 (see plot below, taken from A. M. O. Smith's excellent article High-Lift Aerodynamics). 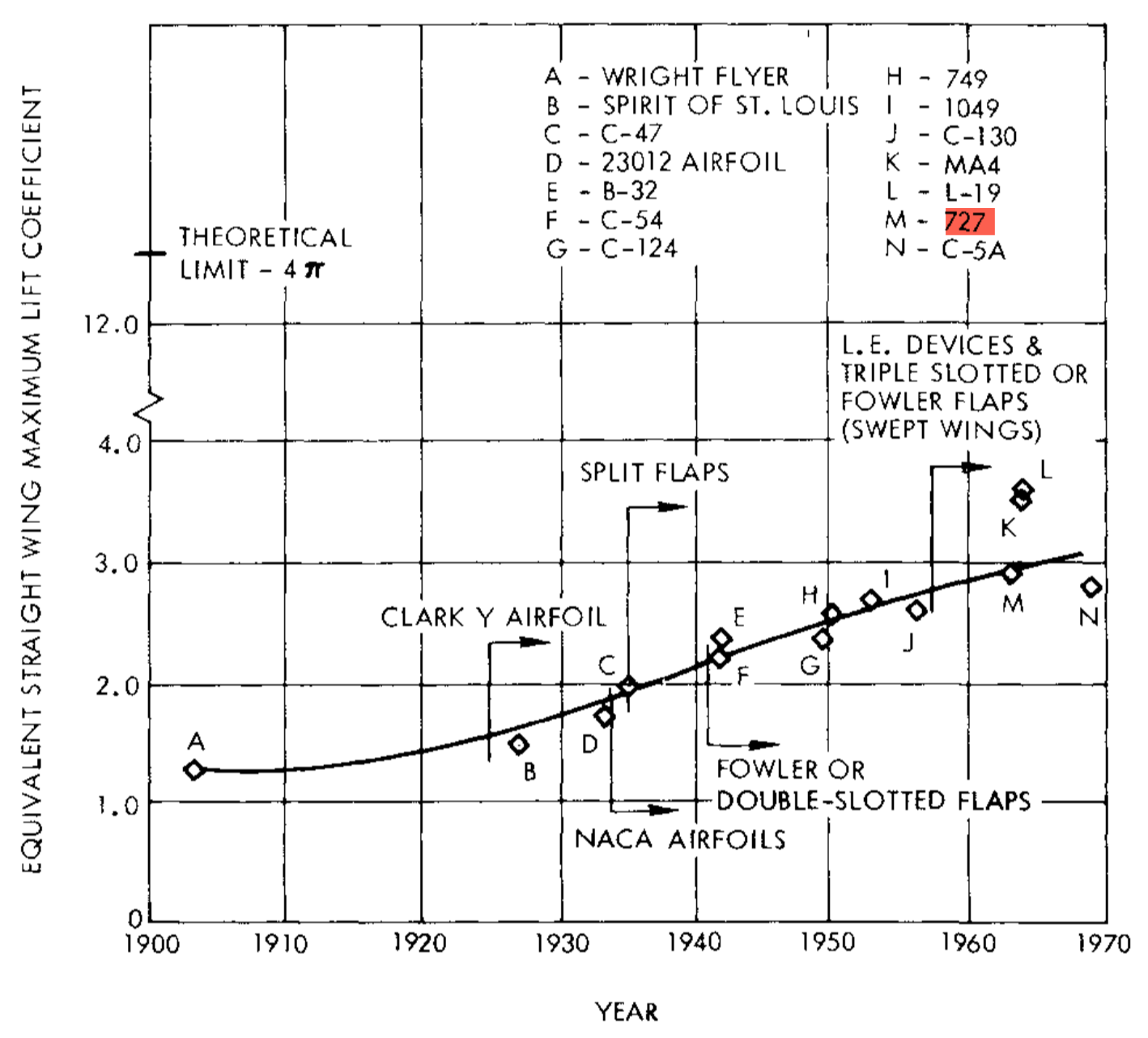 With modern CFD this could be improved a bit, but then the preference of aircraft builders has been to reduce the number of flap elements while losing only a little of lift.

Another practical limit is the maximum Mach number in the suction peak of all the airfoil elements. Once this reaches 1.58, no lift growth could be observed in experiments. This translates to a maximum for the product of Mach squared and pressure coefficient of -1.0. In other words: You need to fly very slowly in order to achieve high values of c$_{l_{max}}$.

The only practical design I know which reached that magic limit of 6.5 given as the c$_{l_{max}}$ of its wing airfoil is the Antonov An-70. Here this number is valid for the inner wing which is immersed in the prop wash of the mighty Aerosila SV-27 propellers, driven by the 13,240 hp Progress D-27 turboprop engines. By using the flight speed and clean wing chord for the reference parameters, this looks to me a bit like cheating. But the achieved lift is real!

Now that you show the Selig airfoil, it should be obvious that it is a point design for maximum lift and no practical applicability in real aircraft. Neither will it allow a thick spar nor low drag at lower lift coefficients. Adding a slat will help little, because the limiting part is the pressure rise on the main airfoil. The accelerating flow up to a chord of about 20% is meant to increase the area in the c$_p$-plot and the pressure rise aft of this point is a Stratford distribution which maximizes pressure gain without separation. Reduce pressure in the suction peak only a bit and the flow will separate, and lift collapses.

Not the answer you're looking for? Browse other questions tagged aerodynamics airfoil flaps theory slats or ask your own question.

15
Why do older airplanes have a wing on both the top and the bottom of the aircraft?
11
Aerodynamic advantage of blunt noses and WHY (subsonic)
2
Would plain and slotted flaps increase lift substantially in a distributed propulsion application?

9
What is the difference between a leading edge flap and a slat?
11
How does the slotted flap work?
3
How to calculate the lift coefficient of a multi element airfoil?
0
Is a 20% forced transition in xfoil similar to adding a vg?
2
What happens when you put vortex generators on both sides of a symmetrical vertical tail?
2
How can an all flying rudder be almost 100% more efficient than a vertical stabilator and rudder?
1
Would a slotted flap still work if the prop is located mid wing between the wing and flap?
2
Cascading Wings: Do they really increase lift by 300%?
2
Would plain and slotted flaps increase lift substantially in a distributed propulsion application?