What is the formula for the bank angle required for a turn in line-abreast formation?

Imagine we have a line-abreast formation of aircraft, with differing airspeeds, turning around a central pivot point, like points on the radius of a phonograph record, with an equal amount time per 360 degrees of turn for each aircraft. What is the formula for the bank angle required of each aircraft, in terms of the variables 1) turn radius and 2) time period per 360 degrees of turn?

Note that essentially the same situation applies when a slow-flying glider-- maybe even a hang glider-- and a faster, heavier glider are thermalling together and trying to stay exactly opposite each other. Again the turn rate must be the same for each, but the turn radius is not, and the required bank angle for each might be different. Clearly, the difference in turn radius is much more significant in this case, than in the case of high-speed aircraft turning in tight formation.

All planes flying a turn in line-abreast formation are turning at the same rate $\omega$.

If planes are turning at the same rate, the time period to complete a complete circle will be the same as well.

See the purple curve in the graph below for the bank angle in a standard rate turn (3°/s): 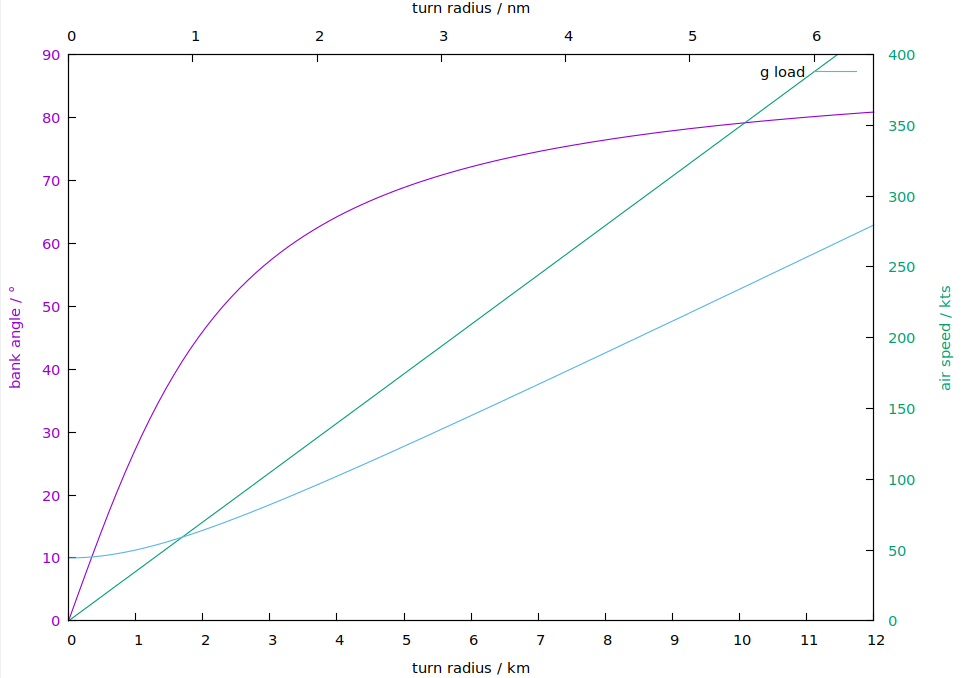 This curve seems to imply that one can fly a standard turn (or any other given turn rate) at any radius from 0 to infinity. Therefore I added two more curves to indicate the physical limits:

And finally, the same plot but for a double rate turn (6°/s): 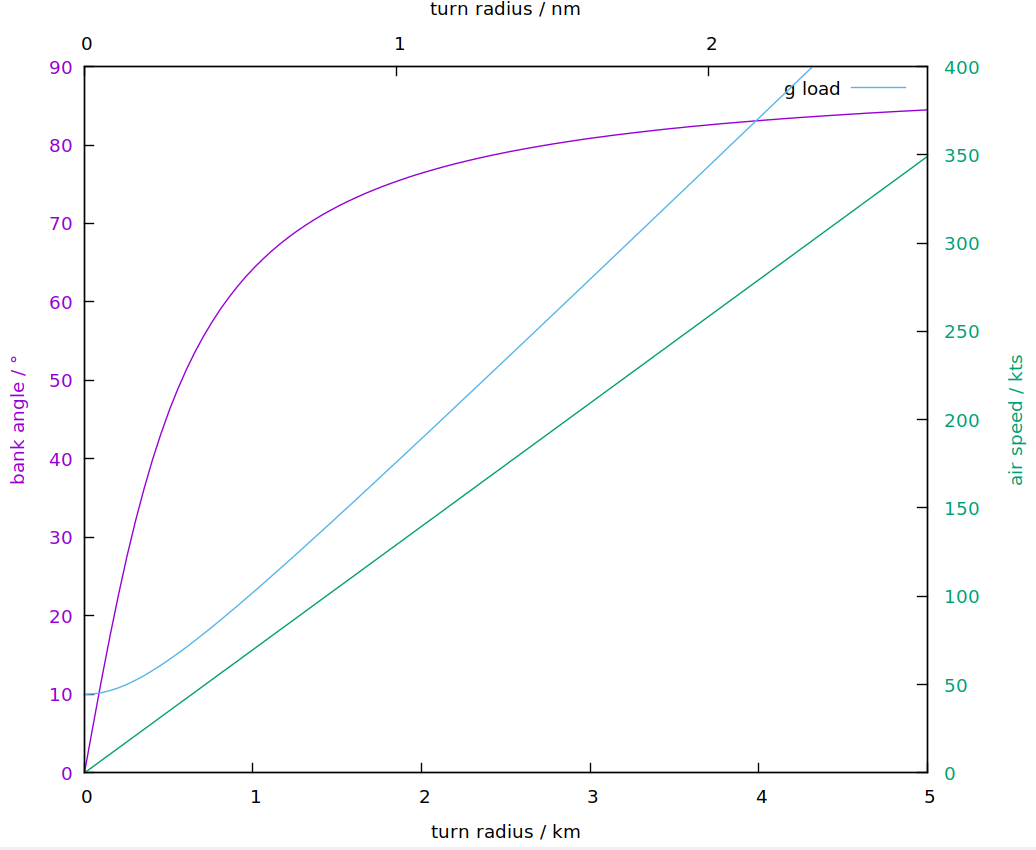 Typical turn radii are in the order of 1000s of meters. Typical distance (wing span) of planes in a tight formation is in the order of a few 10 meters, that is a few percent of the turn radius.

[I will calculate and insert an example here, when I have the time.]

For the practical purpose of actual formation flying, pilots will give the arcus tangens a break, and fly seemingly identical banking angles.

boglbogl
10.5k33 gold badges4040 silver badges5858 bronze badges
$\endgroup$
4
Add a comment  |
1
$\begingroup$
Want to improve this post? Provide detailed answers to this question, including citations and an explanation of why your answer is correct. Answers without enough detail may be edited or deleted.

For all practical purposes, to maintain a line abreast formation the angle of bank and rate of turn will need to be constant, while airspeed will vary with aircraft on the outside of the turn needing to speed up.

As @quiet flyer has strong experience in gliders, the question seems to focus on "how do we stay in a thermal with limited radius if my flying speed is different than yours?"

As flight is 3 dimensional, there is a vertical option.

But for the sake of discussion (maybe for a photo shoot) they both need to hold the same altitude and remain at opposite points of a circle.

In order to have the same rate of turn, the faster must have the outside track. Since radius is proportional to the SQUARE of speed, the radius of a 60 mph glider will be more than double that of a 40 mph glider if they use the same bank angle. Note the difference in radii means they do not have to stay opposite in the thermal!

According to the radius of turn formula R = V^2/11.26×tanbankangle one can decrease their turn radius by increasing bank angle. The rub is that higher AOA or greater speed is needed at a higher bank angle to generate adequate vertical lift.

But notice radii formula has V^2 and ROT formula does not square speed. The distance travelled in the different size circles (pi x D) is linear with speed for equal rate of turn.

Radius at constant bank angle is dependent on the SQUARE of speed, whereas ROT is linear with speed. What to do?

As we can see what actually happens is highly dependent on the flight envelope of each aircraft. The inside one is safer by lowering bank angle and AOA. But if speed difference is too much, they cannot remain in circular "formation".

Using the formulae $F_c = m * \frac{v^2}{r}$ and bank = arctan (Fc / (mg)), we can derive the formula bank = arctan (4*pi^2 *r / (P^2 * g)), where Fc is centripetal force, g is the gravitational constant, and P is the period or the time for one complete turn. The aircraft flying at a larger turn radius must use a larger bank angle than the aircraft flying at a smaller turn radius.

Note that mass or weight does not appear as a variable in the final equations.

Note that v represents True airspeed-- the relationship between bank angle and turn rate or turn period (time per turn) or turn radius is not independent of density altitude.

Read on only if you want to see the math in more detail:

A link to an aviation website giving a rule of thumb for bank angle for a standard rate turn-- the rule of thumb is that the bank angle in degrees should be roughly .15 * (True airspeed in knots).

Not the answer you're looking for? Browse other questions tagged aircraft-physics flying-in-formation or ask your own question.

7
What radio frequencies are used for intercom in formation flying?
12
Why isn't the V flight formation being used for commercial purposes?
3
In a non-symmetric turn, how do the side slip angle and thrust side slip angle affect the equations of motion?
4
How can using split throttles help when landing twins in crosswinds?
10
How does turn radius change with velocity between Vm and Vs, as in a 180 degree turn in a canyon?
5
How changes in Air masses, Air flow direction and intensity affect lift?
3
How common is it in current British usage for the angle between the chord line of a wing and the flight path to be called the “angle of incidence”?
3
Is the turn radius at fixed bank angle really independent of aircraft type?