What is the difference between 'warning area' and 'ADIZ'? Are they overlapped with each other?

On FAR AIM, definition of warning area is

Airspace of defined dimensions, extending from three nautical miles outward from the coast of the U.S, that contains activity that may be hazardous to nonparticipating aircraft

And on Wikipedia, definition of ADIZ is

Airspace over land or water in which the identification, location, and control of civil aircraft is performed in the interest of national security.

I was confused because the definition of these two airspace is similar with each other. And I thought that those area could be overlapped with each other. Could anyone explain the difference, or at least an example chart that contains this two areas?

And if an aircraft tried to fly to the U.S territory from the sea, which area does the aircraft encounter first : 'warning area' or 'ADIZ'?

You can find a good explanation of Warning areas (and lots of other areas) in the answer to this question.

ADIZ is effectively the controlled area that surrounds the US/CANADA border. The picture from the wiki article shows it quite well 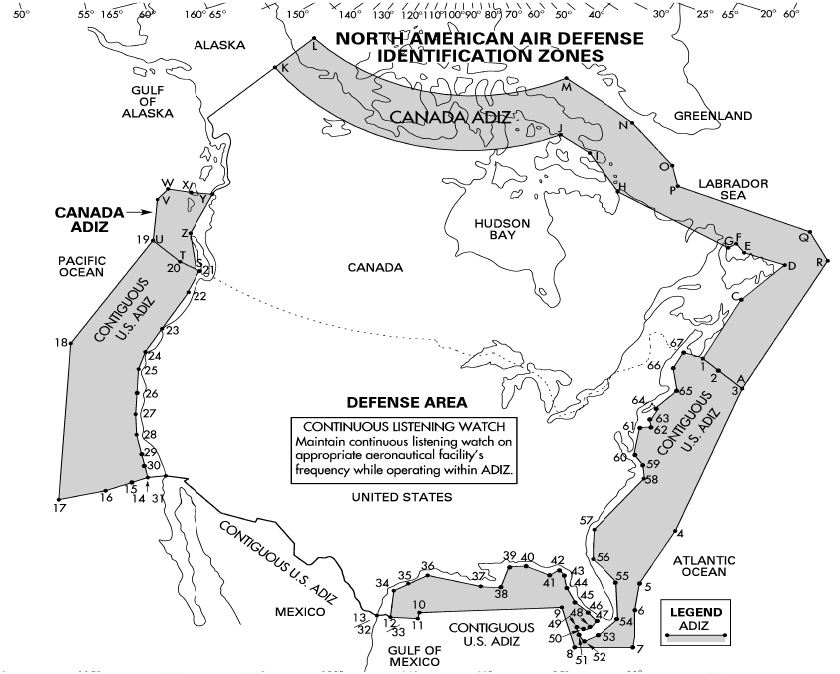 The ADIZ was created to have an area to identify inbound, out of country, aircraft. As per the FAA

All aircraft entering U.S. domestic airspace from points outside must provide for identification prior to entry or exit. ADIZs have been established to assist in early identification of aircraft in the vicinity of international U.S. airspace boundaries (AIM Section 6, 5-6-1)

As far as I know there are no ADIZ areas internal to the country, although warning areas may be anywhere within the nations jurisdiction. I see no reason they could not overlap each other either.

7
What are some examples of warning areas and restricted areas?