How much lift does the wing attach fitting actually carry?

How do I calculate the lift force that the the bolt that join the wings to the fuselage of a strutted or braced airplane carry?

I know in a cantilever airplane,the bolts have to carry all of the lift load on a wing but how about a strutted airplane - how do the wing attach bolts share the lift with the wing braces or struts, i.e. is the lift load shared between them, the bolts carrying half and the bracing wires or struts carrying the other half?

The answer depends on the elastic deformation of wing and strut. Extreme example: Make the strut a rubber band and all lift needs to be carried by the wing and its fittings. Other extreme: Make the wing spar (or attachment points - this works either way) from rubber - now the strut needs to take all the loads.

In real life, stiffness attracts tension and compression, and in order to know the load distribution between wing spar and strut you need to look at them with a slight deformation from loading. How much resistance does each show (in isolation) against that deformation? This will tell you in what ratio the forces will split between wing and strut. Make sure to use the stiffness of the real structure - the material property called Young's modulus is not what I mean here.

If you want to be safe, you need to consider any single point failure and still have a flyable airplane. Normally, you design your structure with a safety factor (usually 1.5, but higher for fittings). Now assume that in turn each of the structural members is missing and calculate the loads on the remaining structure with a safety factor of 1.0. Dimension each part at least for those loads and you should be pretty sure that the intact structure will work out fine.

In flight, the fuselage hangs off of the wing. For dimensioning purposes, consider: 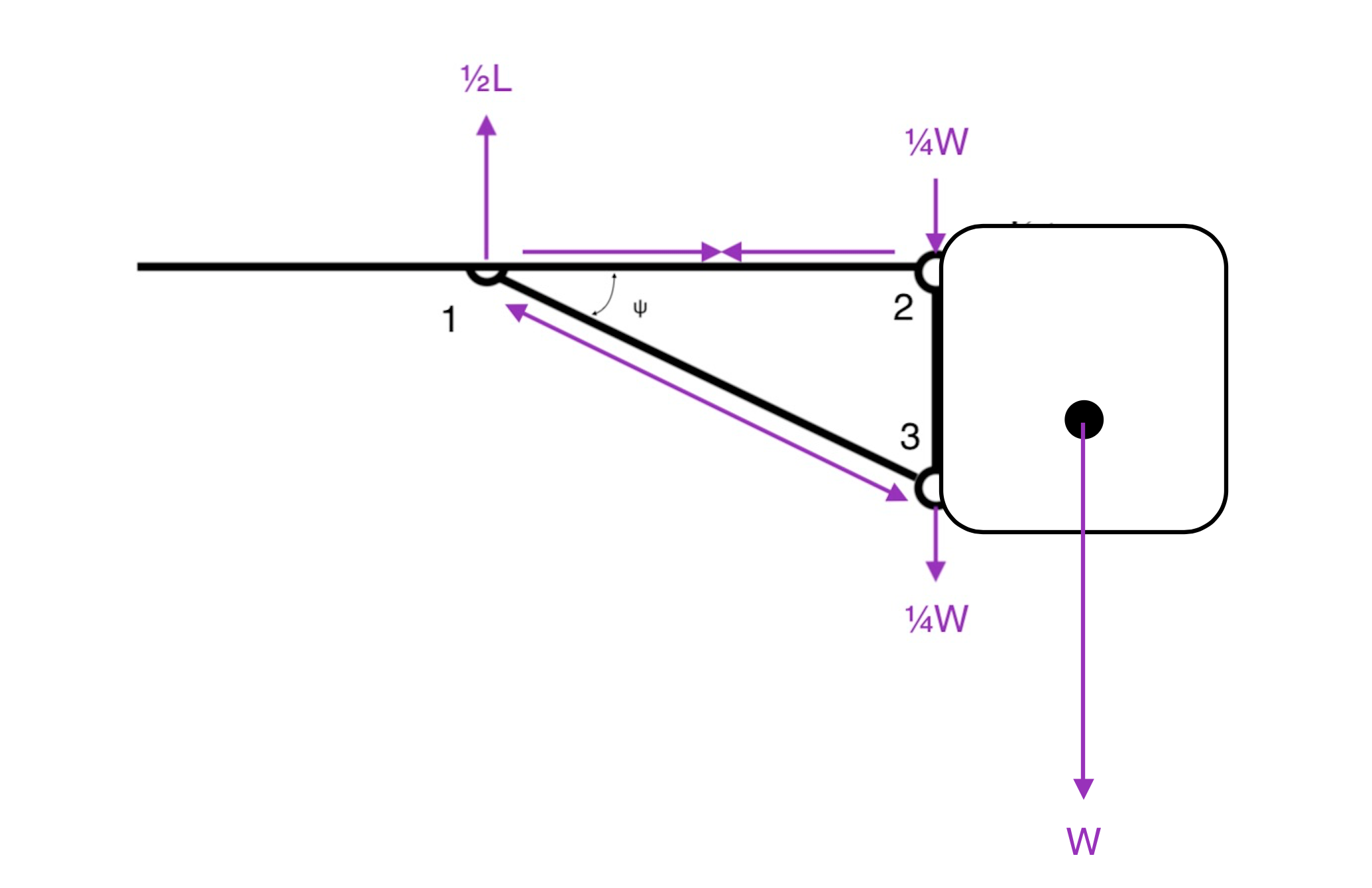 If we dimension the construction in this way, we over-dimension which is never a bad idea with primary construction bolts. In reality the following factors alleviate the loads:

Bolts 1, 2 and 3 experience lift and gravity forces from the construction, and exert equal and opposite forces in order for everything to stay in one piece. Fuselage weight is transferred to bar 2-3 which distributes the load evenly over bolts 2 and 3. Remove the bolts and the fuselage falls from the assembly.

Force equilibrium in point 1 from this answer:

Not the answer you're looking for? Browse other questions tagged aircraft-design wing lift ultralight aircraft-structures or ask your own question.

1
What is the function of interplane strut of a Biplane?

4
How does the aspect ratio of a wing impact its lift?
9
For the elliptical wing, which property is actually elliptically distributed?
3
How does Bernoulli's principle contribute in lifting airplane?
1
Forces that wing attach fittings must transfer to fuselage?
1
How does wing aspect ratio influence lift and drag?
2
How to determine the compressive force in the spars of a strutted wing?
2
Where is the compression on a compression strut in a tube and fabric airplane coming from?