How to determine the compressive force in the spars of a strutted wing?

How does one calculate the compressive force that the inner section of a strutted or braced wing (from the strut attach point to the wing root) experiences?

I know how to calculate the tension in the struts (or flying wires), which is simply

but I don't know to calculate the compressive force that a strutted or braced wing experiences. 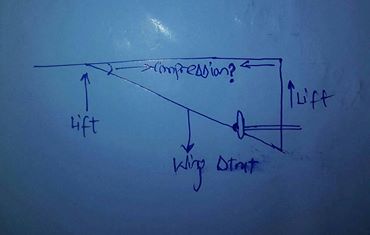 These pictures hopefully will improve the question and serve to validate Sanchises answer.

If I could find a flying wire to take on near all the lift, I would patent it! 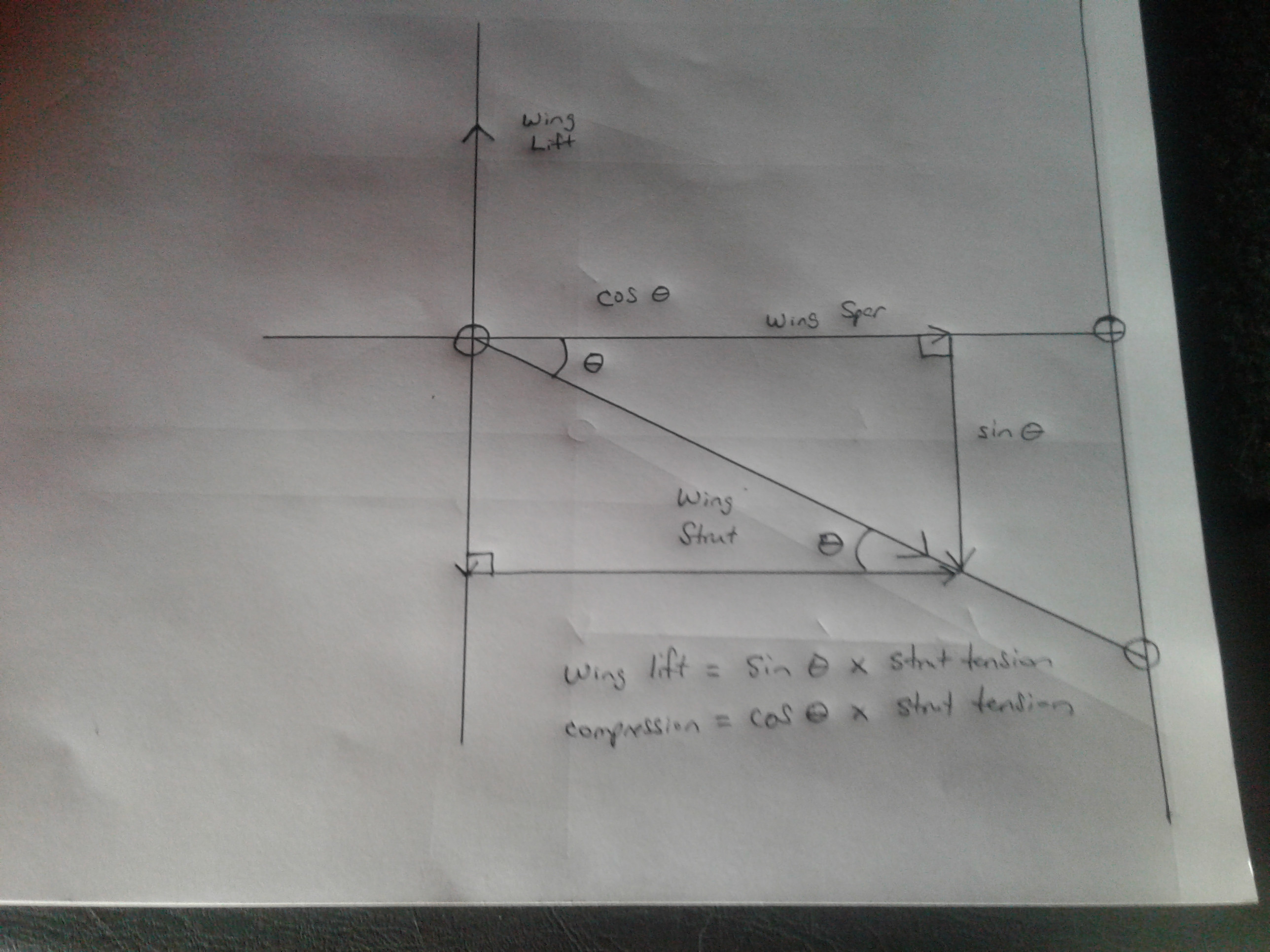 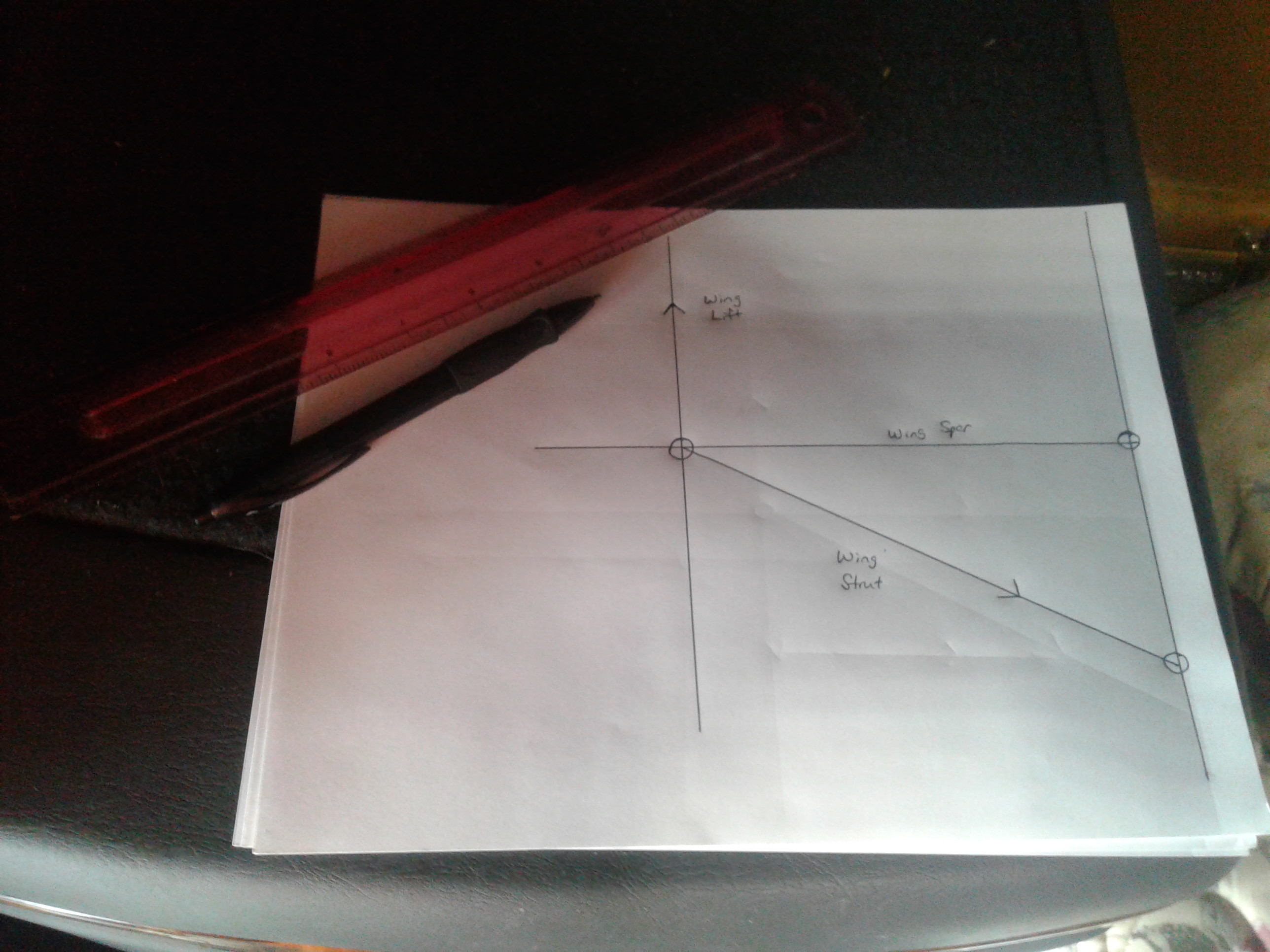 It's very easy. Consider that the point at which the strut is attached does not accelerate, i.e., the forces in all directions exactly even out.

The force in the spanwise direction exerted by the strut is

This force must be balanced by the wing in compression, so the above expression is also valid for the amount of compression on the wing.

This assumes the strut only transfers longitudinal forces, while in reality it may have some bending stiffness. Also, I'm not sure where you got your equation for the tension in the strut, but it's not necessarily true (there's a lot more structural members exerting a vertical force on the wing, so the force- and moment balance is not as simple).

For dimensioning purposes, consider the intersection points to exert no moments and to behave as hinges. 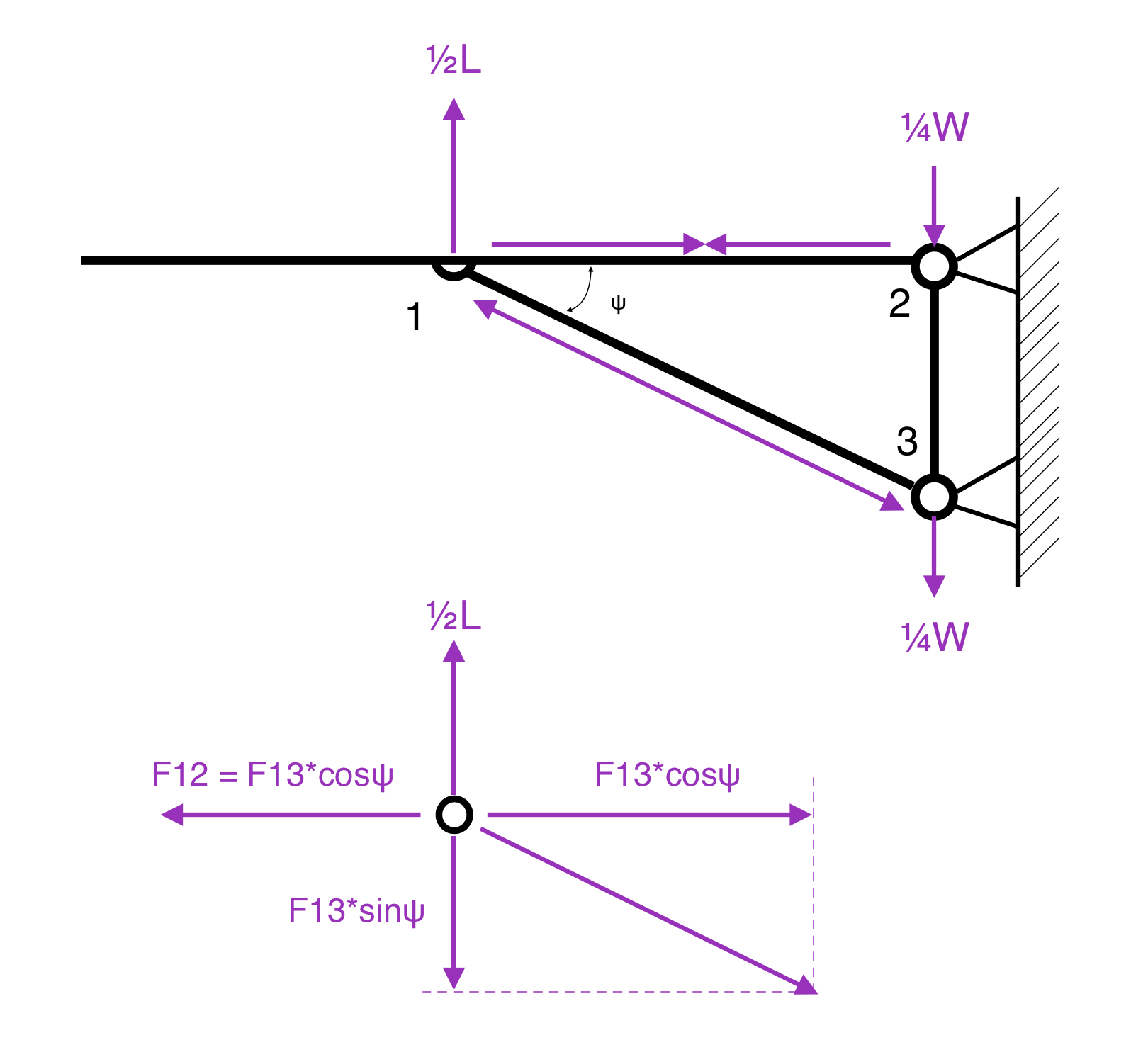 This is a pretty classic exam question involving a statically indeterminate (or over-constrained) system. To solve it you will need to solve the beam equations with the correct boundary conditions, which may or may not be possible (I do not recall at present whether the "cantilever and wire" has an analytical solution, I'll update this later).

Alternatively you can obtain an approximate solution by relaxing your boundary conditions, for example exchanging the cantilever for a point support with a torsional spring of suitable stiffness.

An anonymous comment pointed out that strut braced wings are almost invariably pin-jointed structures to maximise structural efficiency, the system is statically determinate. In this case the structure is analytically solvable without the need to muck around with boundary conditions and beam equations:

Reactions and internal loads for the 2D free body shown can be resolved by basic statics. The strut is a two force member, experiencing axial loads only. The inboard portion of the spar which experiences compressive loads in reacting the spanwise component of strut tensile load is usually idealised as a beam-column.

Not the answer you're looking for? Browse other questions tagged aircraft-design wing ultralight aircraft-structures or ask your own question.

3
Does a rotating control surface change the wing area?
2
How does Bernoulli's principle contribute in lifting airplane?
1
Forces that wing attach fittings must transfer to fuselage?
2
How much lift does the wing attach fitting actually carry?
2
Where is the compression on a compression strut in a tube and fabric airplane coming from?
3
Calculating lift with lifting-line theory in MATLAB
4
I analyzed 2 nearly identical flying wing in XFLR5, how come the one with the thinner tip chord has a higher cD?
5
How to calculate bending moments and shear forces on a wing?