Do the polar curves have large differences in takeoff than in landing?

I was wondering if the polar curve has differences in the takeoff due to the smaller extension of the flaps (this is half that in the landing) that changes the AOA for $ C_ {la} = 0 $. In addition, should I calculate the landing polar on approach?

Yes, in most cases. How large? That depends.

A classic simple flap does these things to lift:

This can be illustrated by this example from Hoerner, Fluid-Dynamic Lift, Chapter V: 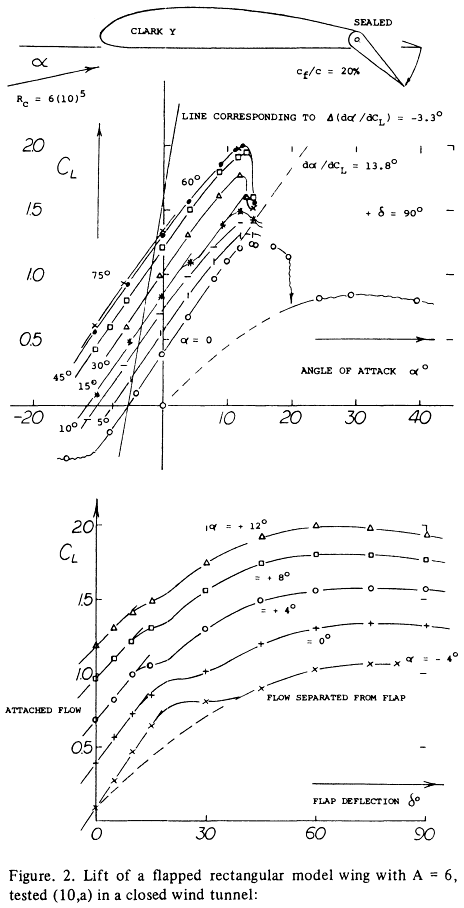 However, this by itself does not show much how the polar changes, apart from the distribution of $\alpha$ along it. We need to know how drag changes as well. As it happens, there is more added drag than lift, often dramatically: 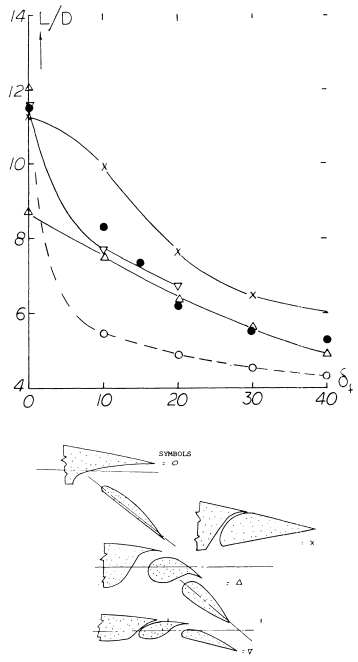 Thus, overall and typically, the polar will shift up and right, more to the right than up. The polar coefficient (how much the curve 'slopes' to the right proportionally to the square of lift) may change either way, but usually not by much.

However, note that flaps are not the only difference between takeoff and landing. For propeller-driven aircraft, propwash will affect the polar significantly, and obviously more so on takeoff than on landing. In this question there is an example of such polar.

The $C_L(\alpha)$ curve changes with flap/slat extension, so it should logically follow that the polar will also change, since the induced drag depends on the lift.

Furthermore the parasite drag will most likely change as well due to a changing airfoil surface.

So yes, the polar needs to be recalculated for all flight configurations.

Not the answer you're looking for? Browse other questions tagged aerodynamics polar-curve or ask your own question.

22
Should full flaps be deployed on takeoff?
4
Is the freestream dynamic pressure higher during cruise or during landing/takeoff?
10
Are there any incidents caused by rudder failure in Military jets?
5
For a large commercial plane on landing, does the L/D ratio increase, decrease, or not change much?
1
Why is polar curve of a glider dependent on flight load?
3
Does propwash increase pitch stability?
1
What airfoils are used for the current generation of general aviation VTOL aircraft?
2
Blunt noses subsonic drag - why a complete ellipse?