How strong someone should be in order to fly without “power steering”?

Planes these days use fly by wire systems while older ones had a mix of hydraulics with electronic assistance like the MD-11 (And maybe 737-800?).

But what would happen if you lost the electronic systems and you had to fly manually? I remember an incident of this happening in a MD-11 and pilots using raw muscle power to operate the flying surfaces (And using something like 10 kilos of force only to keep the yoke in place) or putting 10 kilos of force to the yoke constantly (My memory isnt exactly bad. It was a months ago)

So How much raw muscle power is needed to fly an MD-11 or an 737-800 without assistance for 10 minutes and then land? Through two pilots or as a single person.

Only small planes can fly without power actuation. The largest size airliner that can be flown manually would be about a B737, which actually has manual back-up for the elevator & ailerons as in this answer. The B737 uses a balance tab to assist in lowering the hinge moments during manual actuation.

In a much larger aeroplane like the DC-10, there is no practical amount of reducing hinge moments with servo tabs or other means, and flight control surfaces are deflected using hydraulic power only. This is schematically as follows: 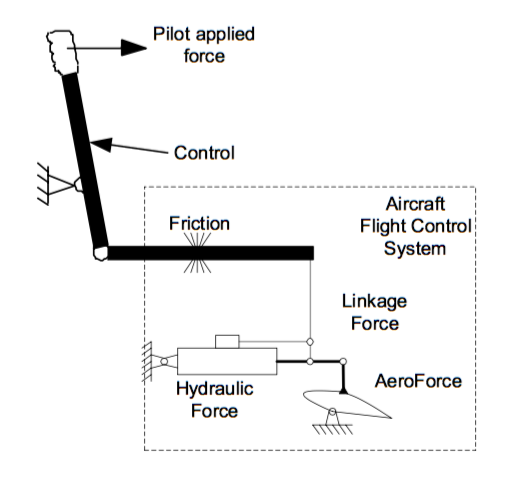 When the pilot moves the stick, they deflect an input linkage which opens the servo valve of one or more hydraulic actuators. These then deflect, moving the output end, thereby closing the servo valve again. As long as there is enough total hydraulic pressure to overcome the aeroforce hinge moments, the actuator moves the control surface without any effort from the pilot required at all. In fact this would be so very light that artificial feel springs are mounted.

However, in some circumstances the actuators cannot overcome the control hinge moments, for instance due to:

Note that in this case, when the pilot pulls on the stick, they first deflect the servo valve until it hits the stop, and this now becomes the fixed hinge point of the input linkage. Further stick deflection results in direct manual surface deflection, against the hinge moments caused by the aeroforces and against oil still slushing around in the hydraulic system.

Like mentioned, in large aircraft with no measures to lighten hinge moments, the flight crew cannot practically control the flight path using manual force. A DC-10 did manage to actually land after total hydraulic failure by using differential engine thrust, not manual actuation.

You can't. Most of these airplanes are flown with hydraulically powered control surfaces with no mechanical input possible from the cockpit flight controls. The flight controls just operate servo control valves in the hydraulic actuators, like the bucket on a front end loader but a little fancier. If it's FBW, the FBW system does the same thing at the actuators using torque motors operated by the FBW computers to drive the servo control valves.

As a complement information to Koyovis answer, please note

On large airplanes, it is rather a « servo tab » that will do the job you are asking for, in case of hydraulic failure rather than assisting the normal force that moves the elevator, it becomes the sole force that makes the elevator move. Therefore during normal flight it acts like a balance tab, in case of failure it becomes the sole active force. Like the balance tab, the servo tab moves in the opposite direction of the flight control’s trailing edge.

Not the answer you're looking for? Browse other questions tagged flight-controls aircraft-systems hydraulic-system or ask your own question.

4
How much electrical power is available in a Gulfstream G550 and from which power sources?
4
Can an F-16 fly with conventional hydraulic powered controls without a computer controlled Fly By Wire System?
4
How strong would a servo motor need to be to power the control surfaces of a fixed wing ultralight aircraft?
0
Why don’t large aircraft (larger than ~737-size) have even partial manual-reversion capability?
2
Why didn’t the space shuttle have flight control manual-reversion capability?
7
Why does the A320 use the rudder for lateral control in mechanical law?
6
How can the F-16 remain stable when there is a loss of hydraulic power?
9
Are 737 pilots required to train in manual-reversion flight?