Why are the Constellation's nosewheels canted inwards?

Why are the nosewheels on the Constellation canted in a few degrees? Is it to ensure both tyres have ground contact during tight ground turns?

I've observed that on the A320 during tight turns that one wheel comes completely off the ground. The A320 nose leg also sits at an angle; would it benefit (if needed) from angled nosewheels? 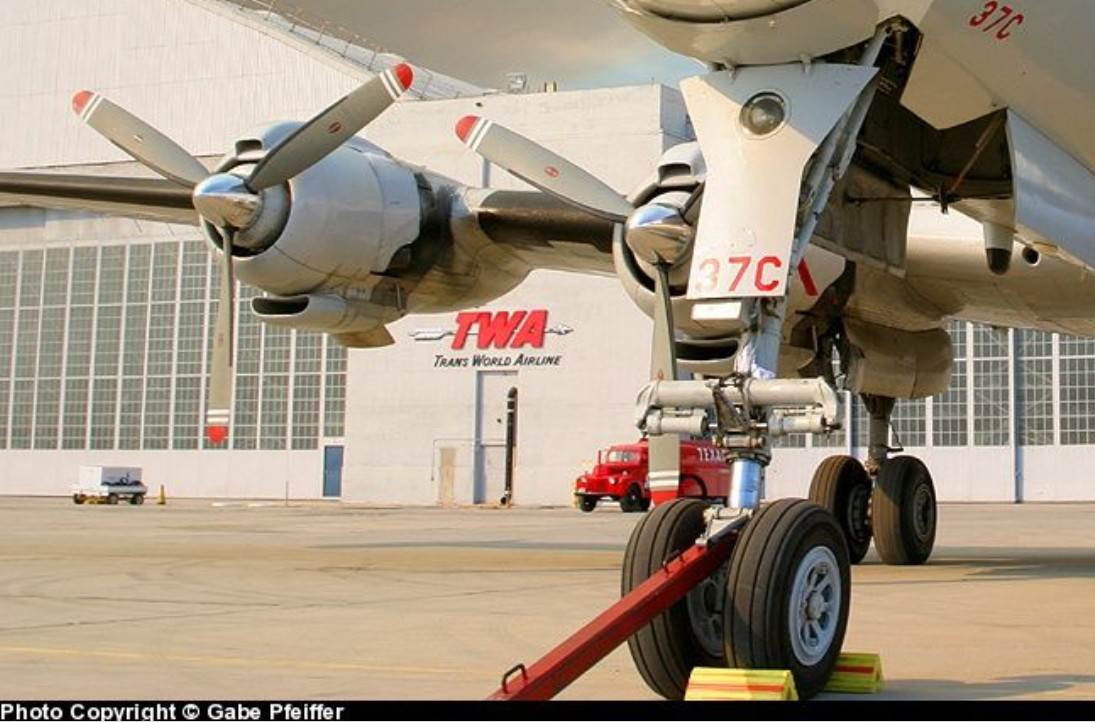 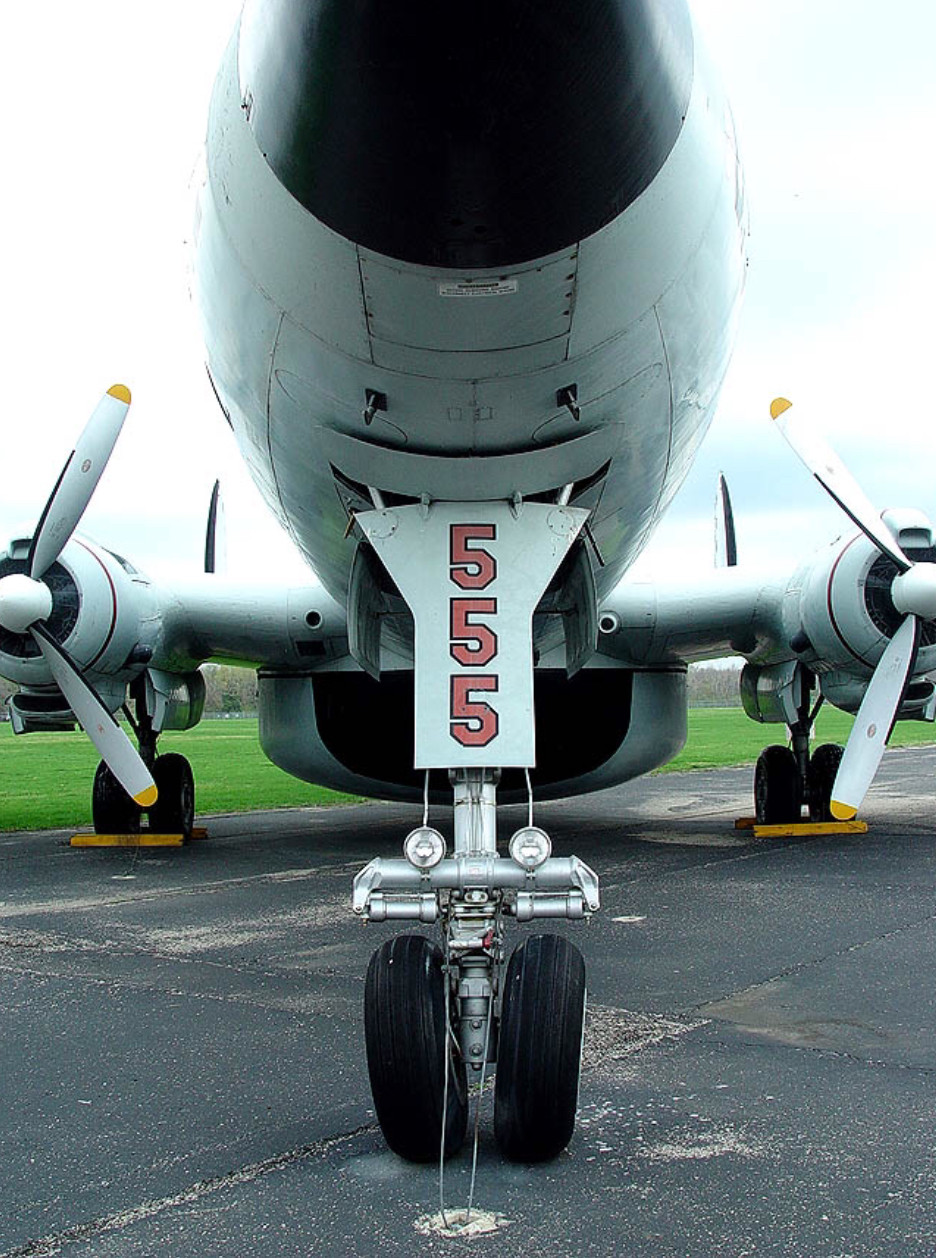 @JohnK gives an excellent explanation for castor - the horizontal offset between the steering axis and the tire contact point.

But maybe the question is about camber. That is the angle between the vertical axis of the tire and the vertical direction relative to the ground. The camber angle on the Connie's nose wheels is called positive camber, and an extreme case can be found on the tractors of that time. Curiously, it is a distinct characteristic only of US tractors like the John Deere (left) and Farmall (right) tractors below (picture source). 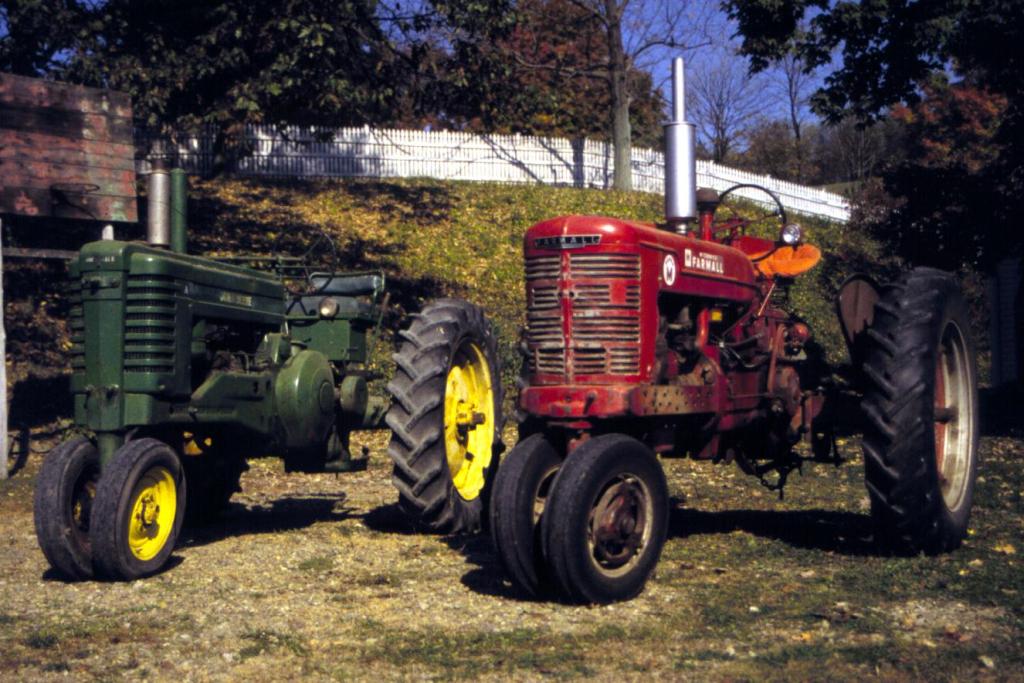 The reason is easier steering in rough terrain. As a tractor discussion board explains:

I have read that positive camber is intended to align the kingpin axis with the center of the tire contact patch. Supposedly this reduces the force required to steer the axle. If that theory is true, then changing the height of the tires would change the intersection point of the camber angle and the kingpin angle; it's improbable that swapping between, say, the correct R4 tires and the correct R1 tires for your tractor would make significant differences.

However, I am not convinced by the theory that the positive camber is there for steering ease. Here is why: I think it would be easier to roll a tire around in a circle than it would be to simply twist it, especially if one considers the tire will be pushing dirt out of the way as it twists.

I think the reason for the positive camber is to attenuate the camber thrust that can occur when the tires encounter uneven terrain. This would tend to help the tractor track straighter, and require less steering input to maintain a straight course. That characteristic, along with the caster geometry, should make the tractor track straight naturally, rather than tending to turn more when either a steering input is made or some uneven terrain is encountered.

The author of this post has his own theory; however, the point made in his first sentence actually has merit: Since steering in automobiles and European tractors is made easier when the steering axis runs through the contact point of the tire with the ground, positive camber is an attempt to reduce the steering roll radius of the twin tires which indeed should make steering easier. 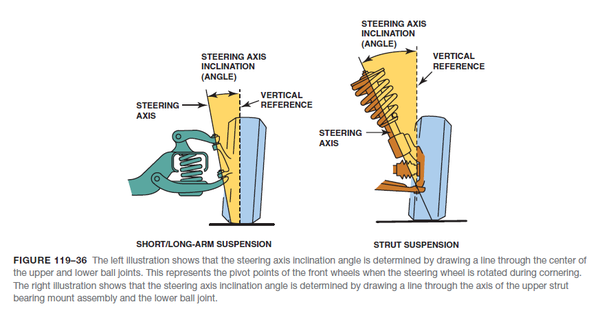 It's basically for the same reason motorcycle forks are canted or raked.

For a nose gear, you have two options to give the wheel assembly a natural self-aligning, or castering, tendency.

You can make it work like a shopping cart caster like the sketch on the right, with a vertical strut and the wheel on an offset dogleg fork so that the wheel contact point B is aft of the steering or pivoting axis point A. A lot of airliners do it this way and it has the advantage of a flat contact pattern all the way around, as well as the ability to caster 360 degrees when the scissors is disconnected. But it's heavier.

If you want to make the strut straight without the dogleg, which is a bit lighter, you make it like the sketch on the left, and angle the pivot axis of the strut so the pivot axis intersects the ground forward of the wheel's axis (called the caster or rake angle - the distance between A and B is called "trail"). Like a motorcycle fork, or a car's front suspension. This gives a natural castering tendency, which is why you can take your hands off the handlebars on a motorcycle and it doesn't veer off.

Raking the strut is almost the universal configuration on single tire nosewheel light planes, but doesn't work that well for turning with double tire wheels because one lifts off the ground when it turns, putting a lot of stress on the axle and wearing the tires unevenly, but this is significant only when making fairly sharp turns so you can get away with it because things are moving slowly. On the other hand, double tires also enhance the rolling stability because both tires want to stay planted by gravity and the only way is when straight - easy to imagine if you mentally increase the rake to 90 degrees - so you need less steering rake than you might otherwise need with a single tire. 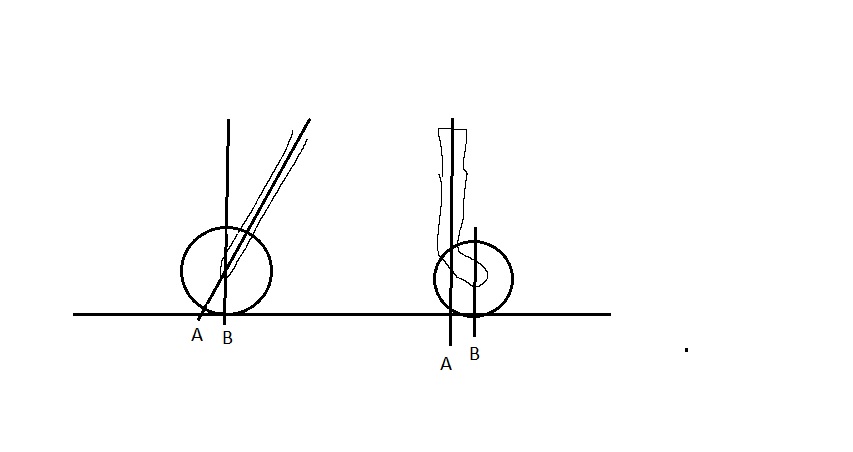 Have to give MikeY, Quiet Flyer, and John K credit for helping me get this one, along with some reading on chopper (motorcycle) rake design.

When a forward rake is "turned", it rolls and yaws, resulting in the tire being slightly on its side while it is turning. This is why the Constellation tires are canted a few degrees. The outside tire can lift completely off the ground as it rolls upwards when the wheel assembly is turned.

Why a raked fork? We know a spinning disk has stability and will resist being turned out of its plane of rotation. Since a raked fork rolls the wheel to its side, the assembly can only be turned with effort against the spinning wheel. This stability would be very important to a long nose strut such as the one found on the Constellation. Any wobbling would be disasterous.

Whether the A320 would benefit from angled wheels, if the rake or length of the strut is not as great as the Constellation, probably not as much. But with the Constellation, it is expected that the inside tire will bear the turn.

Not the answer you're looking for? Browse other questions tagged aircraft-design landing-gear lockheed-constellation or ask your own question.

68
Why are aircraft tires not pre-spun prior to landing to preserve them?
6
What are the states that the landing gear can be in?
10
Why is the gear handle shaped the way it is?
5
Why are there so many moving parts used in the landing gear?
6
Why are landing gear retraction mechanisms mostly based on the four bar system?
9
Why is the Constellation's nose gear so long?
30
Why is the UH-60 tail rotor canted?
3
Why do some airplanes have a vertical rudder hinge while some others are canted?
8
Why is the empennage design of this Lockheed 1049E so complicated?