In mechanics, we learn that a force $F$ acting at a certain application point $P$ can exert a torque (also called moment of the force) about another arbitrary point $Q$ in the plane, i.e. $\tau= F \times PQ$ where $PQ$ is a distance vector. It is possible to move the force $F$ off its application point $P$ and off its line of action and transfer the force the point $Q$. But to keep things equivalent, a couple (two equal magnitude forces, oppositely directed separated by distance $PQ$) must be added. The couple produces a pure moment, i.e. a nonzero moment that does not depend on the reference point (called pole). The new system (a force + a couple) is equivalent to the original one (single force $F$ located at $P$).

Let's contextualize this discussion to an airfoil and its the pitching moment: The force is the lift force $L$ which acts at the point $CP$ located a distance $x_{CP}$ from the airfoil leading edge $LE$ for a specific AoA. It is mathematically possible to move the resultant lift force $L$ from $CP$ to the quarter point $AC$ located at $x_{AC}$ but we need to add a pure moment (couple force system) to keep the physics equivalent. The net pitching moment about $AC$ is just the pure moment due to the couple since the force $L$ exerts zero torque about $AC$ (zero lever arm).

Interestingly, as we change (for ex. increase) the AoA, the magnitude of $L$ increases and the distance $x_{AC}$ decreases getting closer to the $LE$. We can even in this case transfer the force $L$ to the point $AC$ along the chord (zero torque due to $L$ about $AC$) and add the pure moment. This moment will be CONSTANT and exactly the same as the pure moment for larger or smaller angles of attack. Why? Because even if the two forces in the couple are larger, their mutual distance gets smaller for a larger AoA keeping the overall pure moment the same.

If we then shift the AoA to the zero-lift point, then $F=0$, leaving us with the force couple only and the same pure moment (which is the sum of all the remaining forces along the chord which balance at this angle of attack) that existed for all other angles of attack.

As long as we define the reference point to be the quarter point $AC$, all variations in lift $L$ with AoA have no moment around this point. If, however, we choose some other point as your reference point, the change in the lift force with angle of attack will add a moment, so your pitching moment is some constant value plus an angle-of-attack-dependent contribution.

Experimentally, when building a force balance that measures lift and the pitching moment using two load cells, I envision using two vertical supports attached to the wing and connected to load cells. For a certain AoA, the lift force will be given by the vector addition of the two forces, $L_{total}=F_1 +F_2$ recorded by the two load cells connected to the supports (I think). 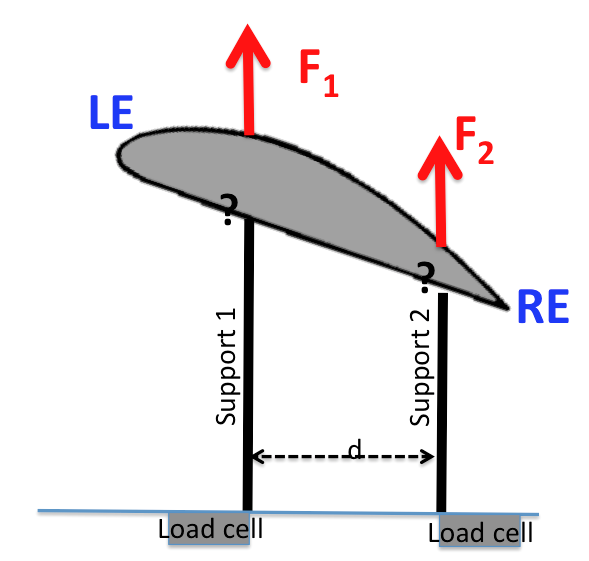 I think it could work this way but I need some validation: Considering the reference point to be the quarter point $AC$, the two forces $F_1$ and $F_2$ and their torques about $AC$ can be made equivalent to a single force $L_{total}$, the total lift $L_{total}$ passing through $AC$ and generating zero moment, and a single couple producing the nonzero pure pitching moment. For different angles of attack, this pure pitching moment "should" be the same...Will it?

There are better physicists than I at this site, but seem to remember a solution proposed in a wind tunnel test with load cells as follows: Do the measurements separately.

Lift could be measured at the center of lift using only support 1. C lift could vary with AOA (data points are generated one at a time from C lift at a given AOA).

Pitching moments could be measured using support 2 only, with the wing pivoting on its AC (which could be some type of axle).

Not the answer you're looking for? Browse other questions tagged aerodynamics theory wind-tunnel or ask your own question.