Why isn't a human required to confirm visually that flight controls are moving?

On this A380 flight after pushback and engine start and before taxi, Capt Juergen Raps and and Sr FO Harald Tschira rely solely on their FID to check flight controls. On a regular flight without the Pilotseye.tv camera crew, they obviously can't see if flight controls respond.

Why isn't a human third-party (ground crew) required to confirm the flight controls' movements? This is obviously shrewder, and adds another safety measure to forestall the possibility that the FID shows a flight control to move when it doesn't. 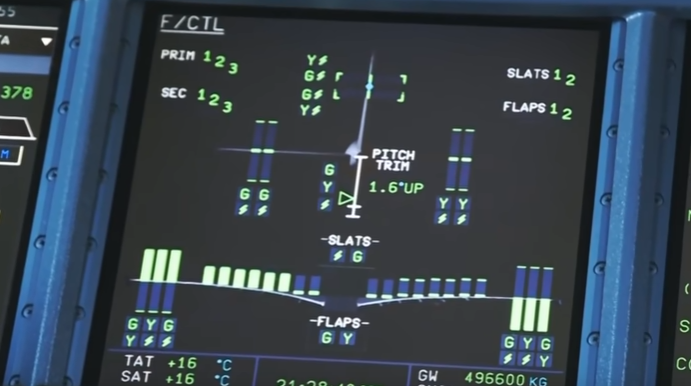 [A] safety measure to forestall the possibility that the [display] shows a flight control to move when it doesn't.

The display (above) doesn't mimic the input, it shows the positions of the sensors independent of the input signal. Since the position change that is being checked is confirmed to be related to direct input, the data is valid.

In other words, an unexpected result with/without input would be an issue with a sensor and/or surface.

In lieu of digital displays, planes like the earlier 747 variants and Concorde had analog instruments that also read sensors. And with the hydraulics operating on a plane like the 737, the fact that the controls are able to move the full range unjammed, indicates that the control surfaces are responding and are also unjammed.

It gets trickier with a plane like the MD-80 where the controls move tabs instead of surfaces (a tab is a control surface on a control surface). It has resulted in an overrun in 2017. No human [visual] inspection could have detected it as the tab would have still moved as expected, but not the stuck surface, also as expected – tabs need airflow to move the surface.

99
Why are the cockpit controls of airplanes so complicated?
38
Are fighter jets designed to be so inherently unstable that a human can't fly one unassisted?
2
Are the panels in this vertical stabilizer part of the flight controls?
11
If all engines fail in a Boeing, how heavy are the flight controls?
24
Why are the controls of transport category aircraft much heavier than light aircraft?
7
Are there any autopilots that are capable of landing a damaged aircraft better than any human?
1
Why were the space shuttle’s flight controls only certified for low airspeeds?
16
What happens to Cessna electric flaps that are moving when power is lost?
9
Are 737 pilots required to train in manual-reversion flight?
1
What are the primary and secondary flight controls for the SEPECAT Jaguar?