What is the reason for setting flaps 1 on the ground at high temperatures?

Yesterday I've seen an A320 standing at the gate with flaps 1. While this question answers, why the flaps should be up, is there any reason to retract the flaps to 1 instead of up?

In addition it seems to apply only in high temperatures (30°C, and rising yesterday). As well in this pilot eyes video the FO confirms the temperature (31°C) before setting flaps to 1 as they taxi to the gate.

I've seen this only on the A320 (yesterday) and on the A330 (in the video). Does this apply only on Airbus aircraft or as well on others?

From the A320 Flight Crew Operating Manual (FCOM):

And the image to text:

On ground, hot weather conditions may cause overheating to be detected around the bleed ducts in the wings, resulting in “AIR L (R) WING LEAK” warnings. Such warnings may be avoided during transit by keeping the slats in Configuration 1 when the OAT is above 30 °C.

Note that moving the lever to 1 from 0 or 2 at slow speeds (on ground) is called config 1+F, which deploys the flaps as well as the slats (see below). 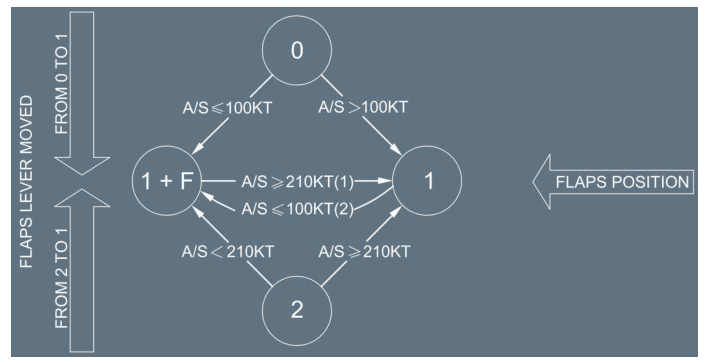 I’ve been flying several types of Airbuses for the past decade and have never seen this kind of procedure before. There certainly is no such limitation in the manuals.

In general, it sometimes happen that there has been such a practice in a previous aircraft type the company has operated and these kind of procedures carry on as best practices or company procedures without any “real” reason.

Not the answer you're looking for? Browse other questions tagged airbus flaps temperature or ask your own question.

15
Why are flaps retracted when an aircraft is parked on ground?
6
Do all A320-family planes have leading edge high lift devices?

11
Is the altimeter setting corrected for temperature?
14
Why are the outboard Krueger Flaps retracted before the others on the B747?
5
What are the benefits of using thick trailing edge flaps?
2
How does setting takeoff flaps improve aircraft performance?
1
What backup systems are in place for flaps actuated by sliding block guides?
1
Is it normal procedure to lower flaps at high altitudes?
0
What does the lift coefficient take into consideration for flaps?
18
Is lowering V1/VR (and runway length required) the only reason for flaps at take off?
4
How do airports in hot climates handle extremely high temperatures?
8
If absolutely nothing changes except temperature, does indicated altitude increase, decrease, or stay the same?