Why does setting the Legacy 600's transponder to standby mode also deactivate its TCAS?

In 2006, a 737 operating as Gol Transportes Aéreos Flight 1907 crashed following a collision with a Legacy 600 business jet; the Legacy's transponder proved to have been in standby mode1 at the time of the collision (due either to a transponder malfunction or to the crew having inadvertently switched it into standby mode), which, obviously, prevented the 737's TCAS from seeing the Legacy and sounding an alarm.

However, setting the Legacy's transponder to standby mode also, apparently, deactivated its own TCAS:

Considering, according to declarations, that the N600XL pilots did not perceive that the transponder had stopped transmitting and that, as a result, the TCAS was inoperative... [CENIPA report, page 83.]

This is also, apparently, the result should the transponder fail outright:

In case there is a Transponder failure, the operation mode and code selected are replaced by dashes in the RMU. An orange message “TCAS FAIL” will appear on both Primary Flight Displays (PFD) precisely in front of the visual field of view of both pilots, as shown by the pictures bellow [sic]. [CENIPA report, page 92.]

I'm not seeing the rationale for this; even if the aircraft's transponder fails or is switched off, there doesn't seem to be any inherent reason why this should require also deactivating the TCAS. Even if the transponder can't, or won't, transmit, the TCAS should still be able to pick up signals from other aircraft's transponders, allowing it to continue to function, albeit in a receive-only mode.

So why does the Legacy 600's TCAS cease to function if the transponder is standing by or inoperative?

1: In standby mode, the transponder does not respond to any interrogation signals, either from the ground or from other aircraft.

TCAS II systems get their altitude information from the transponder, which is a vital parameter to the system working. 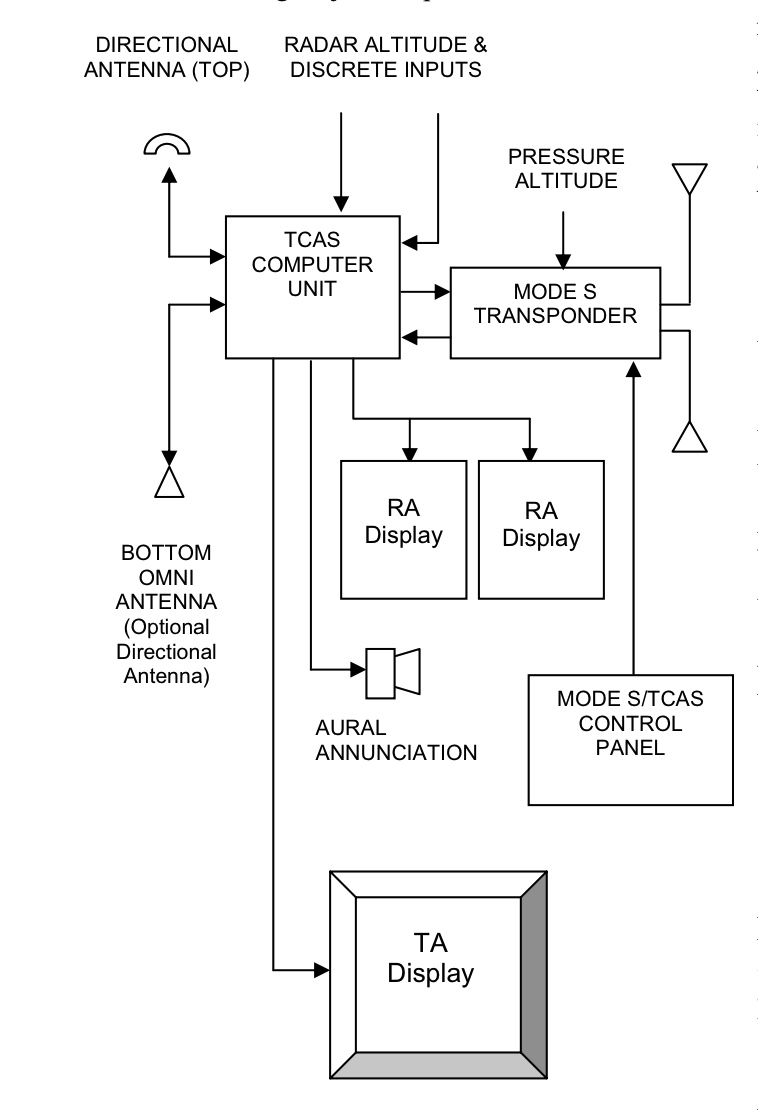 Strictly speaking all of this is only applicable to TCAS II systems but based on the noted case and my reading of the accident report it appears TCAS II was the system in use in this case.

Not the answer you're looking for? Browse other questions tagged transponder tcas embraer-legacy or ask your own question.

16
Why do (or did, until very recently) aircraft transponders wait to be interrogated before broadcasting beacon signals?

3
Can a TCAS be alerted when the intruder aircraft has a transponder in stand-by mode?
10
What is Mode B on the transponder?
6
Why bits are mixed up (interleaved) during ATC transponder mode A and mode C reply format?
5
Why does TCAS need 2 antennas?
2
Does TCAS II work and give RA with Mode C or Mode A transponders?
4
Why is a Mode S transponder required to be installed and working for TCAS II to be operational?
4
Does the ATC not receiving Mode C and intermittently other transponder information imply that the Mode S transponder itself has an issue?
4
Why is 5 seconds the time to respond to a TCAS RA?