What are the scale effects of GA wing tip airfoils?

[ update: I am adopting an improved description provided by Peter Kämpf: "...only looking at the airfoils in isolation..." ]

The goal of this question is to determine if wing tip airfoil scale plays a significant part in stall characteristics for aileron control.

Lets assume we have a small Piper or Cessna aircraft with only a change in size from root to a tapered wing tip. There is no washin or washout at the tip. Lets further assume the wing tip has 50% chord to the root (if some other value is useful, feel free to use what is appropriate). If Reynolds number has any appreciable bearing on the result, lets use approx 50kt/mph as a ruff stall speed.

Q1) Will the wing tip stall at the same speed as the root (root vs tip), or is there an appreciable difference do to size & scale?

Q2) What would the stall characteristics be (root vs tip) if we scaled the tip chord 50% but did not change the thickness?

Illustration for reference, values are not exact. 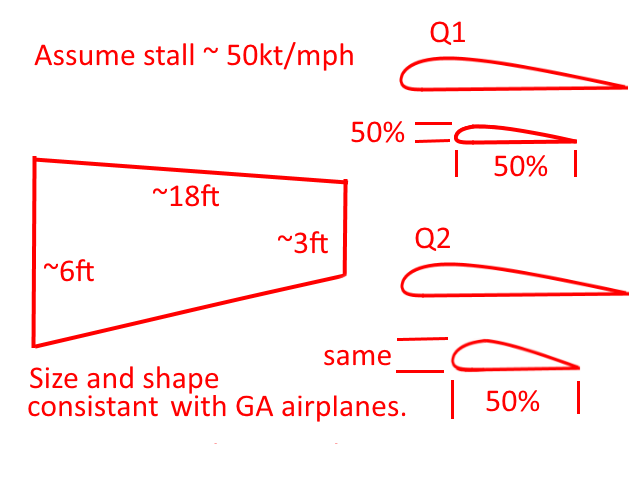 If you only look at the airfoils in isolation, the shorter tip airfoil will stall at a slightly lower angle of attack and lift coefficient (I use angle of attack instead of speed, as both should be equivalent). It has only half the Reynolds number of the root airfoil and, therefore, viscosity forces are twice as big relative to inertial forces. This is made worse by the ailerons on the outer wing: A downward deflection will strain the boundary layer more, moving stall to even lower angles of attack.

The exact difference depends on the airfoil. Below I pasted Figure 18 from chapter 4 of Sighard Hoerner's book Fluid Dynamic Drag. Your wing has a chord of 6 ft at the root and 3 ft at the tip, corresponding to a Reynolds number of 3.25 Million at the root and half as much at the tip at 50 kts speed. Note the logarithmic scale of the X axis below: The 2 million point is halfway between the 1 million and the 10 million point. 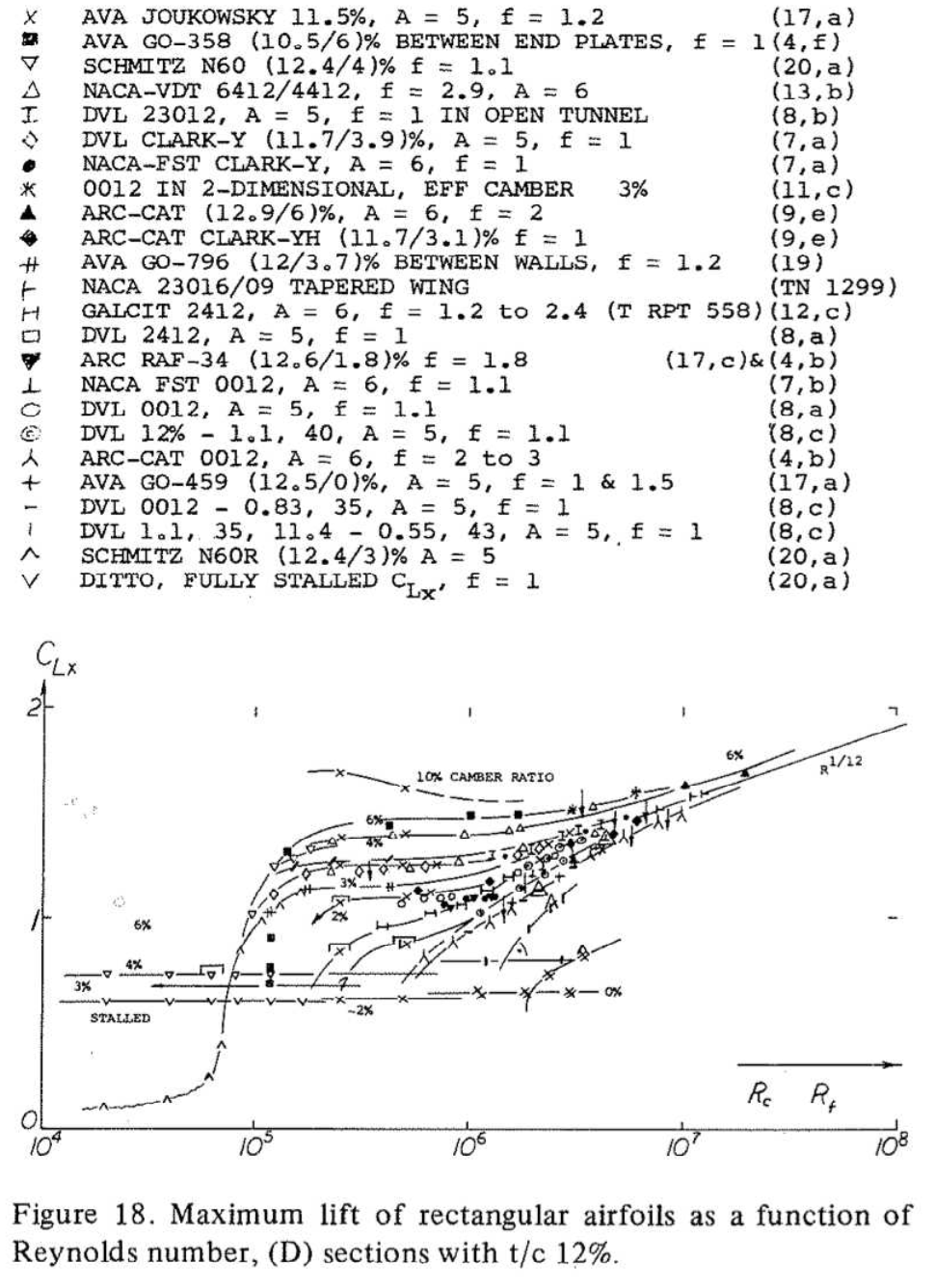 But there is more: With a 50% tapered and untwisted wing the highest loading is at maybe 60% of span - that is where the full wing will stall first. Next, you have to assume a fuselage at the root. Depending on the local pressure distribution, the root might even begin to stall earlier. You sure know comparisons like the one below for the lift distribution and stall behavior of different planforms (source). Yours is case C (moderate taper): 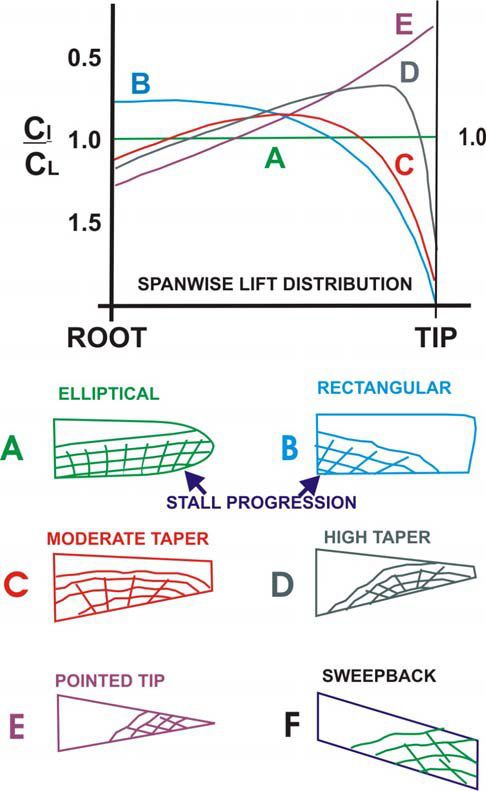 My recommendation is clearly against the proposed planform. Combined with aileron loads, it will be very prone to tip stalls. Given the "right" airfoil, it will show positive roll damping, that is, it will roll all by itself once the stall starts on one side. There are several steps to make the wing more benign: 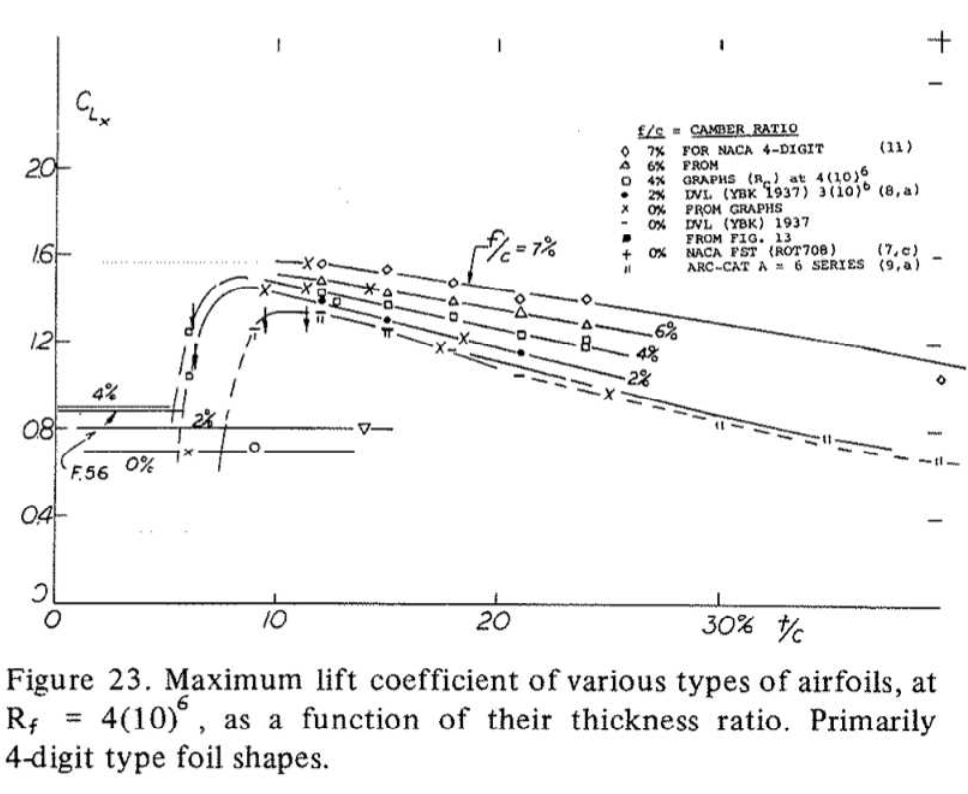 Q2) What would the stall characteristics be (root vs tip) if we scaled the tip chord 50% but did not change the thickness?

You mean the same absolute thickness, so the tip airfoil has twice the relative thickness than the root airfoil? This would guarantee very poor stall behavior and is clearly a poor layout. While the root will benefit from a thicker airfoil (lighter spar, more internal space for landing gear and fuel), the tip enjoys no such benefit. Fuel near the tips is more often a liability (roll inertia, tank internal pressure in spins). Manufacturing a spar with a single taper is only marginally more complicated than a spar of constant thickness. The flanges need to be tapered in both cases - this creates the most work.

In order to have the highest margin for aileron deflection, the recommended tip thickness is 10% - 12%, not more. Many designs even used a 9% tip airfoil successfully. Also, the use of differential aileron deflection is highly recommended. Let the trailing-edge-down movement of the aileron be only half as much than the trailing-edge-up movement. This will improve stall resistance and help to reduce aileron forces, especially at high angle of attack.

My favorite example for a poor wing layout is the Dornier Seastar. It was designed more than 40 years ago by a bunch of old Dornier engineers who basically repeated what they had done on the Dornier 17 another 40 years earlier. While the first prototype inherited a rectangular wing from the Do-28, the "new" wing design used a NACA 23015, no washout and had a taper ratio of 0.7. During an early test flight, the airplane flipped on its back during low speed trials. Fortunately, this happened with enough distance to the ground so this upset could quickly be corrected, but it necessitated the addition of a drooped nose on the outer wing.

Now look at the Beech Bonanza: Same planform and very similar root airfoil (NACA23016.5), but a NACA 23012 at the tip and 3° of washout. And much better low speed characteristics. Usage of a NACA 6-digit airfoil would improve those further, see the Piper Cherokee for example.

The trapezoid wing is a shape we are seeing in our modern fighters, but has been around in various forms and different proportions and shapes since the 1930s, when designers become aware of the effects of drag on higher speed range. Early designs featured a straight front and a tapered back, later designs swept both front and back, the supersonic F16 has a swept front and straight back, the F35 has swept front and back. Roll rate is also improved with this design, along with the ability to handle higher G loads.

(Reverse) tapering the back seems to focus on drag reduction, the front on improving high speed performance. But the old Hershey, hailing from the 1920s and earlier, clearly is a very good choice for GA aircraft.

It's stall characteristics, starting at the root and providing plenty of buffet, add a degree of safety that is very important in this class of aircraft.

Although thickening the wing tip would help (this has been applied to deltas), it is basicly an attempt to fix what has been undone with the taper.

Hershey wings are very easy to manufacture, basicly rolling a rectangular sheet right over the ribs and spar. A trapezoid with varying thickness could be done with greater difficulty. And the trapezoid can be improved with downwash, slats, and flaps, albeit with greater cost and complexity.

Depending on the application, it is a viable alternative. For simple GA, Hersheys rule.

Not the answer you're looking for? Browse other questions tagged aircraft-design airfoil ailerons or ask your own question.

8
Why is there a difference between aileron upwards and downwards deflection angles?