Why would banking be a problem for passengers on the Flying-V aircraft?

In this article, the author raises doubts about the viability of this aircraft:

Sadly for the Flying-V, it will probably fail like the blended wing body designs we've seen down the years. It's for the same reason, too: airplanes bank as they turn. That's not much of a problem in a conventional airliner design, where passengers are never that far from the plane's central axis. But as you move further out from that central axis the effect becomes a lot more pronounced. 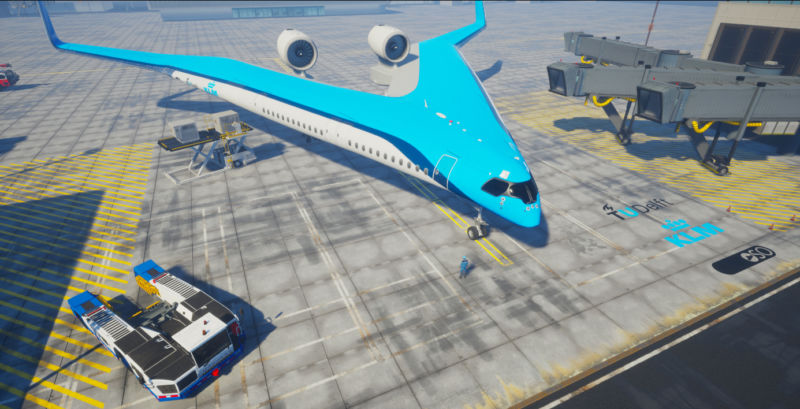 I don't really understand how banking is a problem. The angle for the passenger remains the same, the only difference being an increased of vertical acceleration when the airplane is initiating / retracting the bank.

An apparent simple solution would be to... bank more slowly...

Is there something I'm missing? Would the vertical acceleration really be a concern for passengers?

There are two possible sources of discomfort for passengers sitting farther away from the aircraft's longitudinal axis during a roll manoeuvre:

The roll manoeuvre itself may only last a few seconds, but if the above effects are strong enough, it could be enough to make some passengers feel properly queasy, especially if it's repeated a few times as during departure and arrival procedures.

As you suggest, rolling more gently and more slowly would limit these effects. However, instrument flight procedures always involve standard rate turns, with turn radii expected to remain within certain limits, depending on the aircraft's speed. Rolling more slowly would increase the aircraft's overall turn radius and could make it harder or impossible to comply with currently published procedures.

I have a doubt if the question addresses and actual problem. Banking in airplanes is supposed to match centrifugal forces, same as roads and rail tracks are not horizontal in turns. A lateral pull of gravity, or of the force towards airplane floor, when turning around the main fuselage axis won't be noticeable for passengers, as otherwise, structural loads on airplane would be too high, an airplane is not a rollercoaster, an airliner is not an aerobatics machine, not a combat airplane in a dogfight, but perhaps the inertia, momentum forces in having the lot of weight passengers and airplane structure turning will impose an slow banking rate, a regular airliner has most weight close to center, a 'V' shaped machine, or other lifting bodies, do have an important width in weight distribution; ordinary airplanes have just the light wings quite apart from center line. Is this a reasonable answer to issue? Thanks. Salut +

Not the answer you're looking for? Browse other questions tagged aircraft-design comfort or ask your own question.

10
How is a Flying-V more efficient than current fuselage-over-wing designs?

8
Is thermal expansion/contraction a major design problem for large subsonic airplanes?
10
Why would aircraft engines be mounted with “toe out”?
43
Since there are no toilets on smaller aircraft, how do you deal with the inevitable?
4
Are canards useful for ultra low flying aircraft?
1
Why overhead bin was put on top of passengers head?
37
Why are there no cargo aircraft with “flying wing” design?
9
What would an all-flying aileron look like, and would it be a good idea?