Why is one of Madera Municipal's runways labelled with only "R" on both sides?

I was looking on Google Maps satellite view and noticed Madera Municipal Airport in Madera, CA (ICAO KMAE) has an east-west runway labelled with nothing but the letter "R" on both sides. There is no parallel runway. Why the strange marking? Airnav reports it as runway 8/26, so why not label it that?

Composite for both ends via Google Earth

R is for Restricted. From the chart supplement (formerly AF/D) that runway (8-26) is restricted for agricultural use only.

It's non-standard, both internationally (ICAO) and on the FAA level for Part 139 airports (see AC 150/5340-1M). Note that the airport is neither international nor Part 139, so standards may not apply. 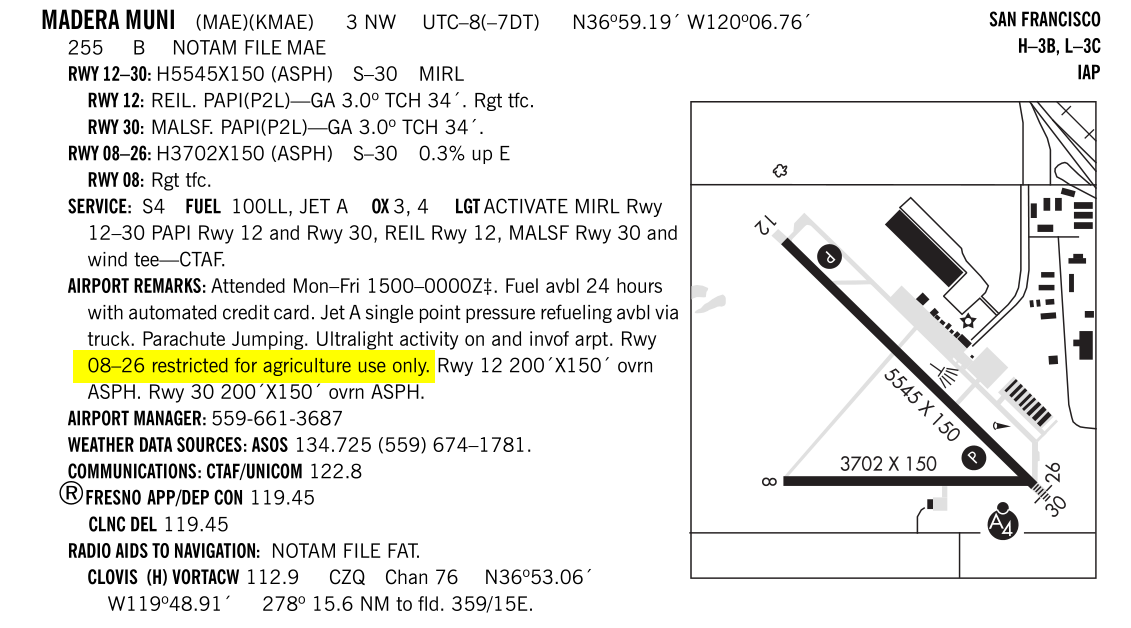 Beyond the meaning of the non-standard R, the Madera County's website offers this (PDF; Sep 2015):

Future abandonment of Runway 8/26 when the agricultural aerial applicator lease expires in 2019.

This hints at a legal agreement with a local agricultural operation. Perhaps someone who is familiar with the local government there can offer more insight.

2021 update: as the website mentioned, the runway is now closed:

An operation I am familiar with uses a turf runway, not listed in the AFD, which is parallel to a paved runway for their ag operations. Time is essential when reloading ag operators, and the turf runway accomplishes that. When conditions dictate, they may use the paved runway, but turf is preferred. Waiting for students to run up a C150 several times a day has a direct impact on productivity.

Similarly, another field has a turf runway parallel to a paved runway, which is used for a glider club. It speeds their operations, and is safer for them, and less aggravation to the folks using the paved runway. IMO there could be better signage to explain things to transients, but as a sometimes tow pilot for them, it does simplify things quite a bit, and the ropes last longer on grass.

22
Why is one of two parallel runways sometimes closed in foggy weather?
16
Are there runways that are numbered only on one side?
12
Why five touchdown zone markings for only one aiming point?
10
How do pilots use stopway, EMAS, clearway and displaced threshold?
10
How will aiport operations at KOAK be affected when taxiway W is promoted to a runway?
20
How can an Airbus Beluga fly only with two engines and use short runways?
1
Why can some runways only be used from one end?
18
What's this turquoise stuff covering the overlap between the blast pads of KBOS runways 04L and 09?