Is it true the F-16 has never lost a dogfight? 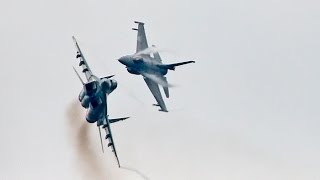 I have heard the F-16 has never lost an air-to-air dogfight - is this true?

migflug.com has a page for combat statistics for all the aircraft currently in use, from which:

The one air-to-air loss (actually two F-16s colliding) was during the Aegean dispute:

One of the routine interception maneuvers led to a fatal accident on 23 May 2006. Two Turkish F-16s and one reconnaissance F-4 were flying in the international airspace over the southern Aegean at 27,000 feet (8,200 m) without having submitted flight plans to the Greek FIR authorities. They were intercepted by two Greek F-16s off the coast of the Greek island Karpathos. During the ensuing mock dog fight, a Turkish F-16 and a Greek F-16 collided midair and subsequently crashed. The pilot of the Turkish plane survived the crash, but the Greek pilot died.

You may consider it zero since it was a "mock" dogfight.

Not the answer you're looking for? Browse other questions tagged military fighter f-16 dogfighting or ask your own question.

9
Are military jets always scrambled when communication to a commercial aircraft is lost?
10
In what manner was the Vympel R-73 (AA-11 Archer) a game-changer in comparison with NATO's missiles?
4
What's this sound? - Dogfight between F14 & MiG23
7
What is the average speed used by modern jet fighters when in dogfight?
34
Is it correct that a jet fighter can be used as a non-lethal (sonic) weapon?
27
Does the cannon of the A-10 deliver more thrust than the engines do?
3
What problems would the early F-16 have if they were to fight during night?
4
Does the F-16 have any armor at all?