How is a Flying-V more efficient than current fuselage-over-wing designs?

It's claimed the plane will use 20% less fuel than the Airbus A350-900 while carrying a similar number of passengers -- the Flying-V will seat 314, while the Airbus A350 seats between 300 and 350. The design also mirrors the A350's 65-meter (213 feet) wingspan, enabling it to use existing airport infrastructure.

All the efficiencies in recent years have come from better & better engines, huge high-bypass turbofans. This fuselage looks like it'd be a lot draggier than existing fuselage/wing structures since there is so much more frontal area.

If you have a window seat, that window cover better be open if I'm in that row! 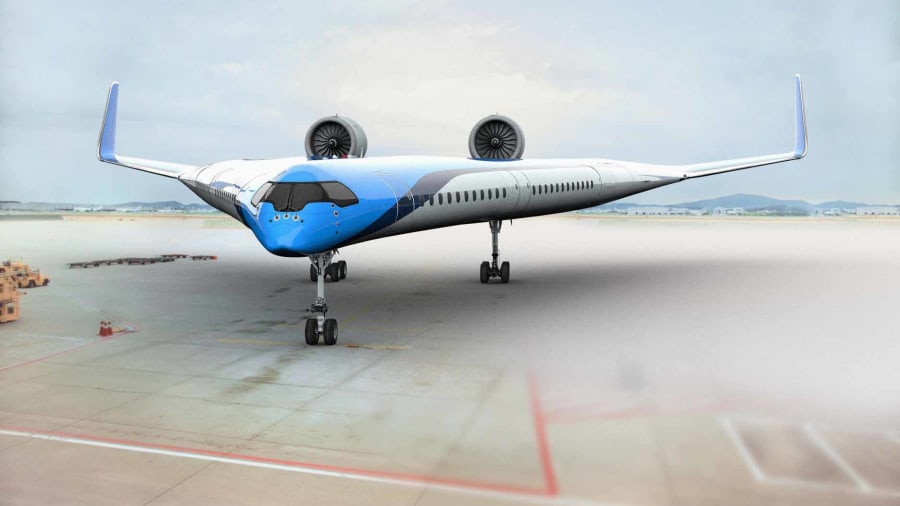 I always ask myself the same question when I read such claims. Only that I am concerned about the huge wetted surface - frontal area is less of a problem here.

When I get hold of such studies, they invariably use projected future technology and compare that with current standards. As you correctly observe, most progress in fuel consumption over the last half century has been due to better engines with higher bypass ratios. Improved aerodynamics contributed maybe 30%, helped by higher aspect ratios and better surface quality made possible by using composite structures.

Another trick: BWBs (Blended Wing Bodies) with their wide fuselage are assumed to need less time for embarking and disembarking of the self-loading cargo. That will make them more productive but the complication of emergency egress from this wide fuselage (remember - all on only one side, within less than 90 seconds!) are waved aside. Also, structural penalties for a flat pressure vessel are assumed to be ridiculously low, so the BWB is even claimed to be more efficient structurally. Which it is, if you look at the spar weight alone. But skin surface area has weight, too - but not in those studies.

What also helps is to fly more slowly. That improves engine efficiency especially with high bypass ratio engines and allows thicker airfoils which certainly are needed in order to spread passengers over more than half of the wingspan. What is saved on the ground is then used up in the air, and the result is indeed a more efficient operation. If we were not bound by that magic number of Mach 0.85, new designs could indeed be more efficient still.

Remember that the A380 also was claimed to be 20% more fuel efficient? After being overweight (no wonder if scaling laws are observed, something the base of this claim conveniently forgot) what is left of that claim today? In reality, the competition uses the same technological progress and the comparison has to be made on a level playing field, with real data. Then those claims quickly collapse.

Not the answer you're looking for? Browse other questions tagged aircraft-design efficiency blended-wing or ask your own question.

68
Are we at peak speed efficiency for jet airliners at Mach 0.85?
22
Why are there no blended-wing passenger airplanes in operation?
8
Why would banking be a problem for passengers on the Flying-V aircraft?