How does this RC helicopter keep itself upright?

I have this (cheap, beginner-level) RC helicopter: 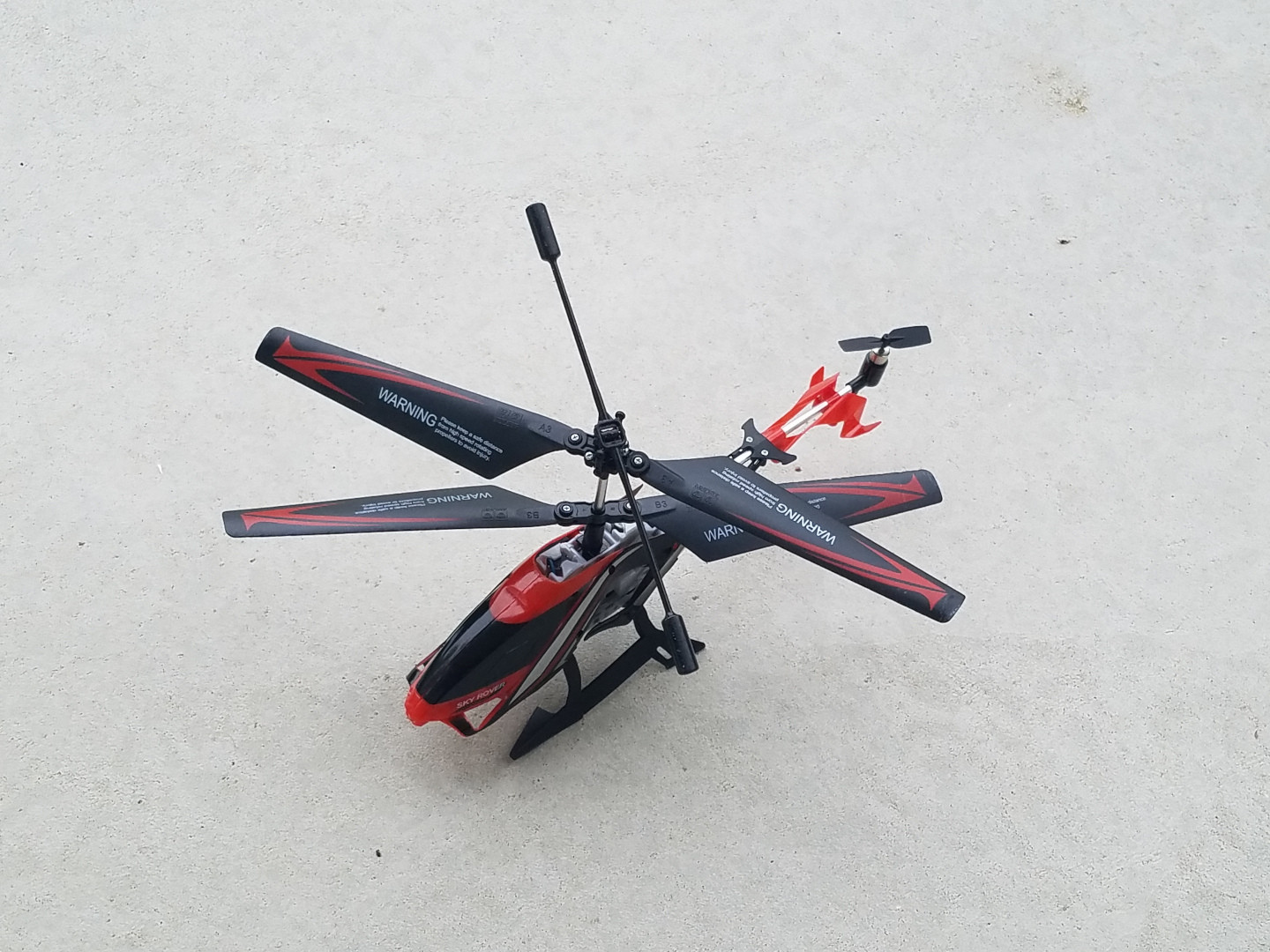 It has 3 controls: one for climbing and descending (collective throttle), one for yawing (differential throttle), and one for pitching (the tail rotor control). There's no roll control.

This helicopter seems to have a very strong tendency to stay upright. Even if you grab it by the skids in mid-air and tilt it slightly, it will right itself (after first flying in whichever direction you tilted it in).

As shown in the picture, the helicopter has two coaxial main rotors and one tail rotor. The tail rotor is pointed vertically, so that it produces a pitching moment. The lower main rotor is fixed-pitch, but the upper rotor has cyclic pitch controlled by a weighted "balance bar". The balance bar itself is mounted about 45° ahead of the rotor. The balance bar is on a hinge so that the ends can move up and down relative to the shaft. If one end of the balance bar goes up, then the blade closer to it is automatically set to a coarser pitch; meanwhile, as the other end goes down, the blade closer to that end is set to a finer pitch.

It seems very unlikely that this helicopter has any electronic accelerometers or gyroscopes.

So, how does this helicopter keep itself upright? Here's what I can figure out myself:

By the way, I've noticed that the helicopter has a tendency to fly in clockwise circles, especially after being disturbed. (It doesn't yaw during this circular motion; it simply moves in a circle while maintaining a constant heading.) I bet that this tendency is caused by the balance bar somehow, but I don't know how.

The Bell 2 blade teetering rotor system used on the '47 and the Huey used a much smaller version of the same thing, to provide a little bit of inherent stability to the rotor disc, without inhibiting pilot control.

The top rotor is a hinge offset rotor with a very serious stabiliser bar. These rotors exert torque via the mechanism in item 1 in this answer, and the body will align itself with the top rotor. But the other way around as well: the rotor aligns itself with the shaft, it just depends on what it controlled, the rotor angle (like in a regular helicopter through cyclic pitch) or the body angle.

The helicopter is flown by body tilt.

Notice that the pendulum fallacy does not apply to helicopters: they can align rotor thrust away from the CoG, like a hang glider does when canting the wing, and create a rolling or pitching moment that way.

On the flight in a circle without changing yaw (with the helicopter flying backwards halfway in the circle): thanks to @ZeissIkon in a comment:

The "flies in circles without changing heading after being disturbed" behavior is most likely due to precession of the balance bar. Disturb the fuselage/rotor shaft, some of that disturbance propagates into the balance bar; once the body has righted, the balance bar continues in a very slightly tilted plane, and the slight righting force from the shaft causes it to precess. – Zeiss Ikon

28
Would a helicopter with the blades on the bottom fly the same, if at all?
5
How does a helicopter hover?
1
Will this radical design work?

23
How is it safe for helicopters and Ospreys to refuel in mid-air?
13
What causes hunting movement in helicopter rotors?
28
How does a coaxial rotor helicopter achieve yaw?
8
Is it possible to design a helicopter with fixed rotor blades only (no blade angle/flap/pitch)?
4
Can a contra-rotating helicopter simply tilt its entire rotor set instead of using a cyclic?
1
How Helicopters Change Attitude (Gyroscopic Precession or Thrust Vector Tilt)
0
Are there any helicopters with tail rotors where slip-skid ball may be centered even when fuselage is streamlined to the airflow in cruising flight?
3
How does gross weight affect helicopter autorotation?
1
Rotor-wing aircraft feasibility
1
Between hover and moving straight forward, which one is this Sikorsky uses more power?