How does an operator change the engine thrust rating?

If, for example, an operator has a Boeing 737-800 with CFM56-7B engines set at a 22K thrust rating, but the next operator wanted to operate the engines at 24K thrust rating, what would they need to physically do to the aircraft in order to change this?

Would it involve the engine going to the shop for certain components replacement, or is it as simple as a FADEC reprogram? I've noticed the life of certain engine components differ depending on the thrust rating used so I wondered how the engine is converted to these different configurations?

turbofan thrust
Share
Improve this question
edited May 29 '19 at 15:53

Please refer to the following website, it explains the plug programming.:

WHEN ENGINES ARE MOVED BETWEEN AIRCRAFT AND MAY REQUIRE A DIFFERENT THRUST INSTALLATION THIS N1 MODIFIER IS USED IN CALCULATIONS TO UPRATE OR DERATE A GIVEN ENGINE AT AN APPROPRIATE LEVEL.

You may also read

THE THRUST LEVEL OF AN ENGINE IS CHANGED (PERHAPS MORE ACCURATELY "PROGRAMMED") BY INSTALLING A "ID PLUG" THAT SCREWS ONTO THE EEC AND CONVEYS PROGRAM INFORMATION THAT SETS THE ENGINE THRUST OUTPUT TO THE LEVEL DESIRED BY THE OPERATOR.

With respect to the thrust limit, you may display on the CDUs ( MCDUs) the FMS thrust limit page that allows the pilots to derate the TO thrust.

The Airbus A320 family is powered by two CFM International CFM56-5B turbofan engines. These engines can produce a thrust from 21600 lb (9800 kg) to 33000 lb (14970 kg) depending on the aircraft version set by the engine data programming plug.

All the engines are basically the same. A programming plug on the Electronic Control Unit (ECU) changes the available thrust.

Keep in mind the engine has its own certification. So if the 22K operator in your example did not have the 24K certification, it may not be as simple as depicted in the quotation.

Although the 5B series comes in 9 variants with 5 different bypass ratios, the FADEC manages that by adjusting the variable stators, limiting or increasing the air reaching the core.

The 7B should be similar, but I don't have a reference for it.

From the wikipedia page for the CFM56-engine: notice that the different thrust ratings are specified per aircraft type, with for instance the 737-700 having been delivered with four different ratings. The engine hardware for a model number does not change, a reduced maximum rating is indeed just a different circuit board inside the FADEC.

The smaller versions have a lower thrust rating because of the shorter moment arm between vertical tail and engines: upon engine fail, the rudder authority is less and can therefore only compensate for a lower max. thrust.

This article mentions the various ratings, thrust limits, derating etc that are applicable to fixed wing and rotary wing aircraft. Notice the use of the word "rating":

The only 2 thrust ratings that airplane jet engines are certified for are maximum takeoff (MTO) and maximum continuous thrust (MCT). All other thrust ratings —such as(ground/flight) idle, climb and cruise thrust— are only figures recommended or set by the engine manufacturer. 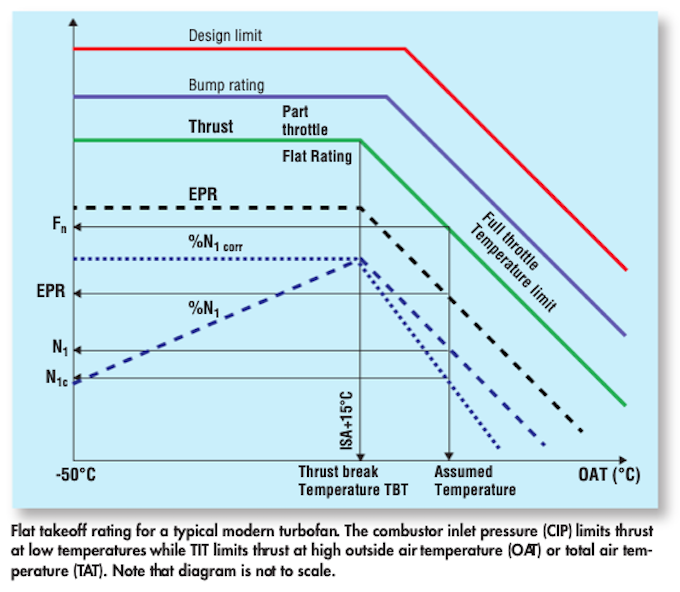 I suspect you are confusing thrust ratings (which are design limits from the manufacturer) with thrust limits, which are programmed in the FADEC. Two different things. A turbine engine may be rated for a certain thrust, but be limited to a lower MTO because of the aircraft in which it is installed. The former is fixed and documented on the engine data plate (along with the current configuration of the engine), the latter is programmed into the FADEC.

Turbine engines such as those used on the B737-800 have only two approved thrust ratings, the MTO (max takeoff thrust) and MCT (max continuous thrust). Everything else from there to idle are just manufacturer recommendations. The engines on the -800 are CFM56-7B engines rated at between approximately 18,500 and 34,000 pounds thrust within 49 different model numbers, as listed in the TCDS (Type Certificate Data Sheet). If an operator wants their engines to last, and minimize repair maintenance costs, they will do things like not push the engines to MTO when it is not needed, and less thrust will do.

For those of you can deal with the FAA's technospeak, AC 33.7-1 goes through the process that an aviation turbine engine manufacturer must follow to obtain type certification, and explains the difference between thrust ratings and operating limitations. In essence, this confirms what I have already stated -- operators cannot change thrust ratings because that would require a new certification process for the engine, with all that that entails. Only limits can be changed and then again strictly within the performance envelope specified in the type certificate.

26
What provides the greatest thrust in a high-bypass turbofan engine?
12
How (and why) does engine thrust change with airspeed?
3
On a ducted propeller, how does duct length affect thrust?
6
How does the line of thrust affect longitudinal stability?
3
How does the power distribution change for a turbofan engine from being stationary to going at full speed?
1
Can the maximum thrust of a turbofan engine be estimated by its intake diameter?
0
How does landing gear affect thrust on a light twin-engine airplane?
9
How does the bypass air provide thrust?