How can I fix the stalling of an RC plane after the addition of floats?

I'm modifying a RC plane into a bi-plane with floats and it keeps stalling. I don't have a bigger battery or better motor to add so how do I fix this? This is the biggest challenge I've ever faced. 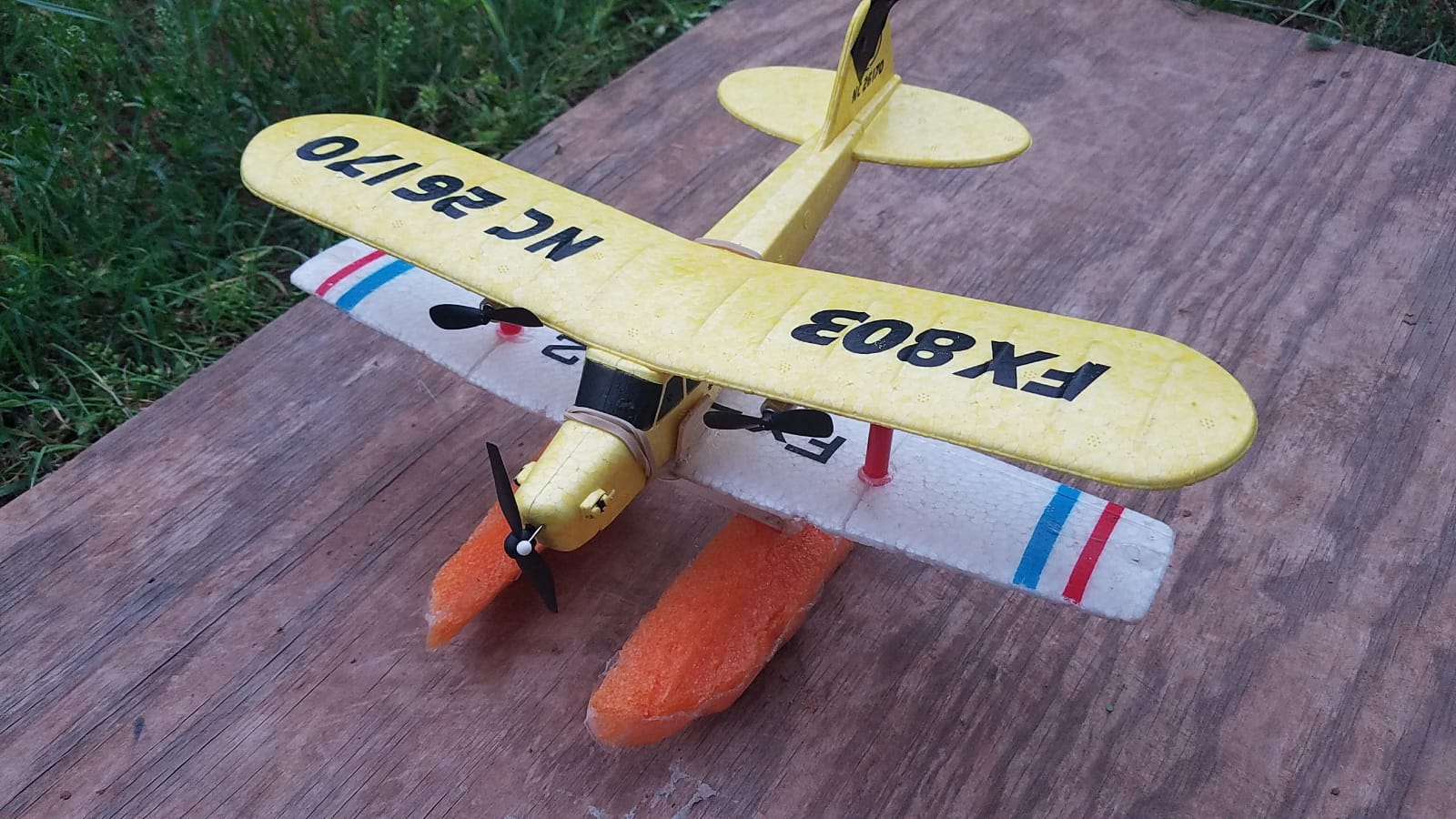 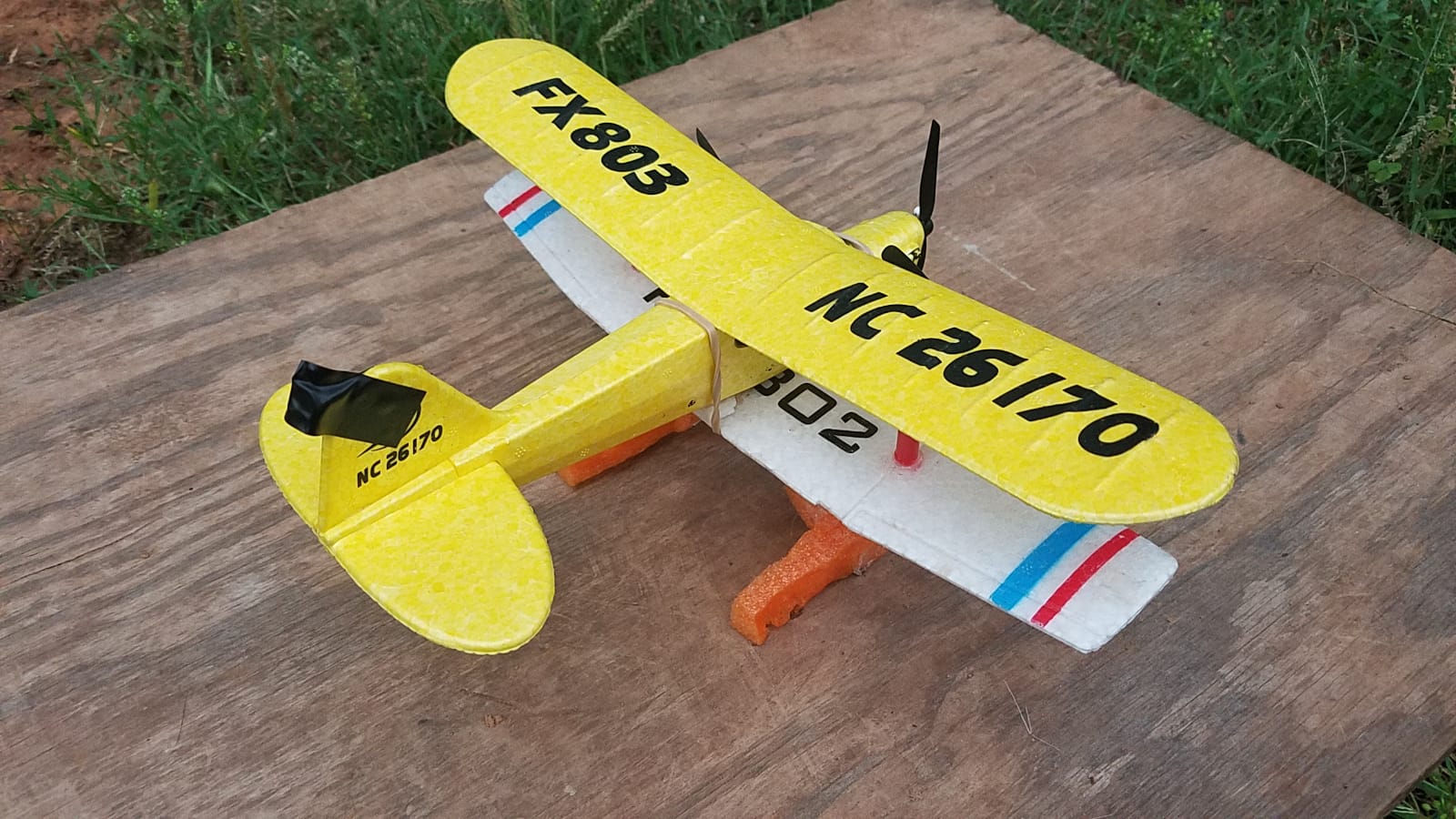 Your model is based on the FX-803 Piper Cub model shown in this video. It's made from expanded polystyrene wings and fuselage, with a two channel radio that controls thrust from two motors mounted below the wing, with overall thrust controlling pitch and differential thrust controlling yaw. There are no moving control surfaces, and the propeller on the nose is a cosmetic windmilling attachment.

Your extra wing, lashed on with elastic bands, may or may not produce lift, but adds additional weight and drag below the thrust line, inducing a significant nose down moment. Your carved foam floats add additional drag even further from the thrust line exacerbating the nose-down problem, and further increasing the weight.

The original model was built and trimmed to give flying characteristics that could be controlled by simple thrust adjustments. There is no moving surface with which to counter the added drag, and even if there were, it is unlikely it would have sufficient authority to overcome the problem.

The modifications may also have moved the centre of gravity significantly, possibly beyond the point where it is fixable.

The model shown in the video has sprightly performance on limited power. The additional weight and drag you have added could easily overwhelm the available power.

You could try adding a fixed elevator to provide significant down force at the tail, but this will further compound the drag issue, and could also affect centre of gravity.

Realistically, I doubt you will be able to get this to fly. If you do, please come back and post a video!

This plane appears to have no moving control surfaces at all-- it appears to be controlled purely by differential thrust from the two wing-mounted motors. You could consider modifying the horizontal stabilizer to give the plane an elevator, even if just works as a ground-adjustable trimming device. You need to fix the elevator in a slightly lowered position to counteract the stalling tendency you are experiencing. Don't overdo it! It could be as simple as piece of stiff cardboard taped to the back of the horizontal stabilizer, that you can bend into a lowered position. In fact it looks like you may have already done something like this with the vertical fin, to give some right rudder trim.

Or you could just try moving the CG forward by adding weight to the nose. This is probably the best solution as will enhance pitch stability as well as help address the trim issue. Again, don't overdo it! Small changes will be best--

Or try a combination of both approaches.

OK! Is there a doctor in the house!

Try moving the lower wing back until it stops pitching up. "Staggering" the wings may also reduce interference between the two, which may be part of the problem once it starts to pitch up. It should fly better overall with the lower wing further back.

Try this modification and hand launch to test. If it works, then reset your floats as needed.

Not the answer you're looking for? Browse other questions tagged aircraft-design stall model-aircraft amphibian or ask your own question.

13
How does an engine failure affect the flight of an airplane?
4
How many aluminum panels on the top of a 172M wing from 1972?
8
What is the largest aircraft (by max takeoff weight) in which all engines are in the tail?
3
How can I find the optimum chord wing length for this wing?
3
Does the required torque to spin a propeller increase with RPM?
2
Does dihedral improve roll stability in gusty conditions?