Surface deflection if loss of hydraulics on combat jet

In a typical combat jet from the 1970ties, at loss of hydraulic pressure, how does the deflection surfaces behave?

If it happens on the runway, will the weight of the surfaces make them deflect downwards?

If it happens at speed, will they align with the incoming airstream?

I heard something about a Hydraulic lock, is such a thing common in fighter aircraft and will it make the surfaces 'freeze' at hydraulic loss?

Depends on the type of actuator; idling or non-idling. If idling, there is an internal idle circuit that ports the extend and retract side of the actuator cylinder together when there is no pressure. Such an actuator can be moved when something drives the surface while the actuator is unpressurized, and the fluid within will just circulate between the extend and retract sides. There is usually some restriction to this idle flow so the unpressurized actuator still provides flutter damping. You know an actuator has an idle circuit if the surface starts to sag part way over time when the aircraft is sitting unpressurized on the ground.

If the actuator has no idle circuit, and there is no extend or retract input to the servo control from the control system, it will be hydraulically locked at that position because the fluid on the extend and retract sides has nowhere to go (assuming the fluid isn't gone obviously). To move the surface of a no-idle actuator while unpressurized, you have to displace the servo control by moving the controls, which will connect the extend/retract chambers to the pressure/return sides of the hydraulic system to break the hydraulic lock and allow the actuator to be moved.

If there is a dual actuator installation with no-idle actuators and one of them is unpressurized, it will be hydraulically locked while there is no control input, but when you move the stick, the gang bar linkage interconnection of the two servo valves, that synchronizes them, will break the lock to make sure the unpressurized actuator doesn't resist the pressurized one.

With a dual actuator installation with idling actuators, when one is unpressurized it just becomes a flutter damper, and if both are unpressurized, the surface will sag on the ground or, if it was an aileron say, it would float up in flight.

A non-idle actuator would only sag on the ground or float up in flight if the control circuit itself is displaced to break the hydraulic lock that is set up whenever there is no servo input.

So if you have say a single no-idle actuator on an aileron while flying, and the pressure is lost, it will sit there at neutral, hydraulically locked there. If you were to move the control stick to displace the servo input, the hydraulic lock would be broken and the surface would float up. Normally they are in pairs so you'd have to lose both hydraulic systems for this to happen.

So, if the airplane you are concerned with has controls that sag when the airplane is parked, it has idle circuit actuators that would allow the surface to float or otherwise align with the stream, or sag if on the ground, if the surface was completely unpressurized. If the controls stay rigidly at neutral and can't be moved when the airplane is parked unpressurized (unless someone moved the stick while you push), it has no-idle actuators and they will stay at neutral in flight unless you move the stick.

Most of the ones that we measured without hydraulic pressure would just sit there. Moving the stick is possible within the servo valve deadband, but the surface does not move whatsoever, just stays in the last known position.

Hydraulically powered fighter jet surfaces are powered fully redundantly, by separate actuators and separate hydraulic systems. If pressure fails in system 1, opening the servo valve (by moving the stick) just connects pressure to return and its actuator becomes a passive damper that otherwise does not hinder the functionality of the remaining one. Yes the inputs to both servo valves are linked.

Most hydraulic power systems for fighter jets are irreversible, meaning the aerodynamic hinge moment cannot move the stick. But if the hinge moment becomes larger than the total force of the active actuators, the surface cannot be deflected anymore.

Info on military jets don't seem to be not publicly available. I could find this hydraulic schematic for a G450 elevator: 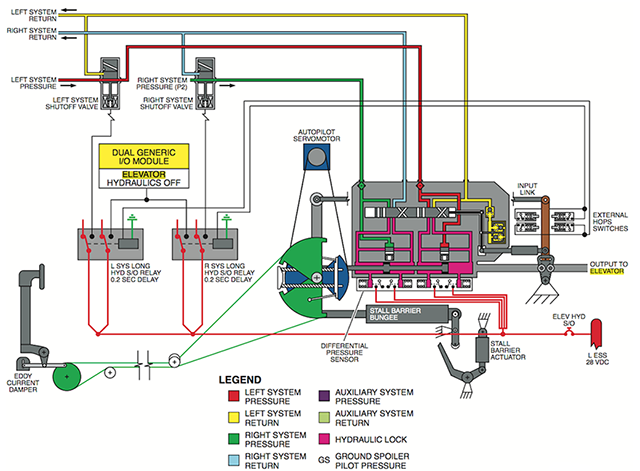 This set-up allows manual reversion: when all hydraulics are off the pilot can manually deflect the elevator, at higher forces than with hydraulics functioning. Note that the pink colour denotes "Hydraulic Lock". It means that when the servo valve is closed, back driving the actuator is not possible due to trying to compress the hydraulic fluid.

Over (a very long) time, gravity may slowly push the hydraulic fluid back through the circuit when unpowered. When all oil in the circuit has seeped back into the reservoir.

Not the answer you're looking for? Browse other questions tagged fighter control-surfaces hydraulic-system or ask your own question.

15
Why do most commercial airplanes use hydraulics instead of electric/servo motors?
4
Is there a relationship between control surface deflection and a particular turn radius or bank angle?
4
What is the lightest weight operational jet/turboprop fighter ever deployed in combat?
8
How long does it take on average for a control surface to deflect by one degree?
6
How can the F-16 remain stable when there is a loss of hydraulic power?
7
What does it mean to move a single flight control to its full deflection?
2
How is the bandwidth of an actuator selected for a primary flight control surface?
4
Why would engine fire cause loss of control?