Are there any full-size airplanes flying with a Selig S1223 airfoil?

Are there any full-size airplanes flying with a Selig S1223 airfoil?

Based on a quick perusal of the "Incomplete Guide to Airfoil Usage", my initial answer is no. If you look up any of the big name manufacturers that are present on that list (Schempp-Hirth, Schleicher, Grob, Schweizer were my picks offhand), they use a mixture of Wortmann FX, NACA, and Eppler airfoils. That said, the truer rationale comes a look at a Cl vs Cd curve, or how the lift and drag of an airfoil change with respect to one another.

I have a representative Cl vs Cd curve below (Cl on the vertical axis and Cd on the horizontal axis), where the purple line is a Selig S1223 airfoil, the yellow is a Wortmann FX 61-163 (used on a number of Schleicher sailplanes), and the green is the Eppler 603 (used on a number of Grob sailplanes). Obviously, the S1223 produces far more lift than any of the other airfoils, and hits its most efficient point (maximum lift for minimum drag) at a very high lift coefficient -- just a shade over 1! 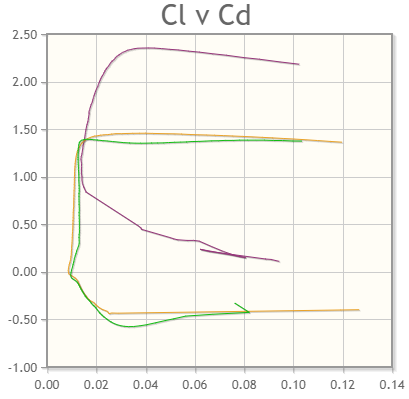 However, this is not necessarily a good thing. If we work some numbers, it starts to become apparent. Using a the definition of lift coefficient, we can estimate the typical lift coefficient (

) of a Grob 103 in trimmed flight something like this, where

is the density of air,

is the aircraft's wing area, and

is it's flight speed.

Looking on the Cl vs Cd chart, this value is below the S1223's minimum drag point, and is actually where the S1223's drag is starting to spike. However, it does hit right in the lower drag region of the Eppler and the FX quite well. Furthermore, gliders aren't flying straight and level, which is what this calculation implies, but are, actually, descending (when outside a thermal/ridge lift/etc.), so the actual lift coefficient we need is probably somewhat lower, leading to even higher drag production from the S1223 but falling right into the "sweet spot" of the Eppler and FX airfoils' lift/drag characteristics.

In short, while the S1223 does have amazing lift characteristics (at lower Reynolds numbers -- these trends may not hold to a Reynolds number of 3,000,000, which would be closer to an operating sailplane), it is actually not the right airfoil for a regular sailplane. For model-scale aircraft, however, it does have application, especially when wingspan is limited.

1
What are the alternatives to XFLR?

26
How do paper airplanes create lift if their wings are flat?
107
Is there a maximum possible size for an airplane?
3
Beside payload size, what precise factors are considered to choose the fuselages shape?
7
What are the conditions for an airfoil to be a “thin airfoil?”
2
Would adding a slat and a slotted flap increase the max CL of a multi element airfoil to 6.5?
1
Tapered Wing Providing low Coefficient of Lift