What does the behaviour of water on the skin of an aircraft in flight tell us?

Sometimes in damp conditions I notice some surprising (surprising to me, anyway) behaviour of water.

I'll see moisture glistening in the heads of rivets or bolts on the top of the engine pylons - that stays there for a long time (many minutes) after take-off.

Similarly, at the front edge of my window I will see a pool of water that only very slowly diminishes, seeding little drops (that become smaller and smaller as airspeed increases). Again, this pool remains far longer than I'd expect.

I'm surprised because I'd expect the evaporative and sweeping effect of the high-speed airstream to clear this moisture extremely fast, and yet it doesn't.

I suppose that despite the speed of the airstream, there are numerous small areas on the surface of the plane that are sheltered from it very effectively.

I'm interested to know what the implications of the causes of this effect are are for aerodynamics, for example how they relate to drag on the fuselage, or - where it happens on lifting or control surfaces - how their operation is affected.

This effect is likely caused by something called the "boundary layer," first defined by German engineer Ludwig Prandtl in a paper he presented in 1904 at the third International Congress of Mathematicians in Heidelberg, Germany. From Wikipedia:

The effect of the paper was so great that Prandtl became director of the Institute for Technical Physics at the University of Göttingen later in the year.

Over the next decades he developed it into a powerhouse of aerodynamics, leading the world until the end of World War II. In 1925 the university spun off his research arm to create the Kaiser Wilhelm Institute for Flow Research (now the Max Planck Institute for Dynamics and Self-Organization).

The math in the paper is complicated and frankly well beyond my paygrade, but the way I understand it, what I think you are seeing is caused by a laminar boundary layer that forms very close to almost all surfaces of the aircraft. It is a layer of air with high viscosity, low turbulence, low speed relative to the air farther out from the surface, and causing an increase in drag. That's why the water doesn't blow away or evaporate.

The image below is one I found which does a good job of presenting the two types of boundary layer -- laminar and turbulent. Look at how smooth the laminar boundary layer looks compared to the turbulent boundary layer. This might help to understand the concept better.

The boundary layer is also something I experienced with an experimental aircraft I restored that had an opening on the top right of the fuselage to feed air into the fuel injection system intake. As it was, air would essentially stop flowing into the system when the aircraft accelerated, and the engine would stop. Not good. In order to stop that from happening, a raised scoop had to be installed that extended above the laminar boundary layer and into the turbulent boundary layer. That solved the problem.

A solid body moving through a fluid develops a boundary layer around it, which is caused by friction between the surface and the air. 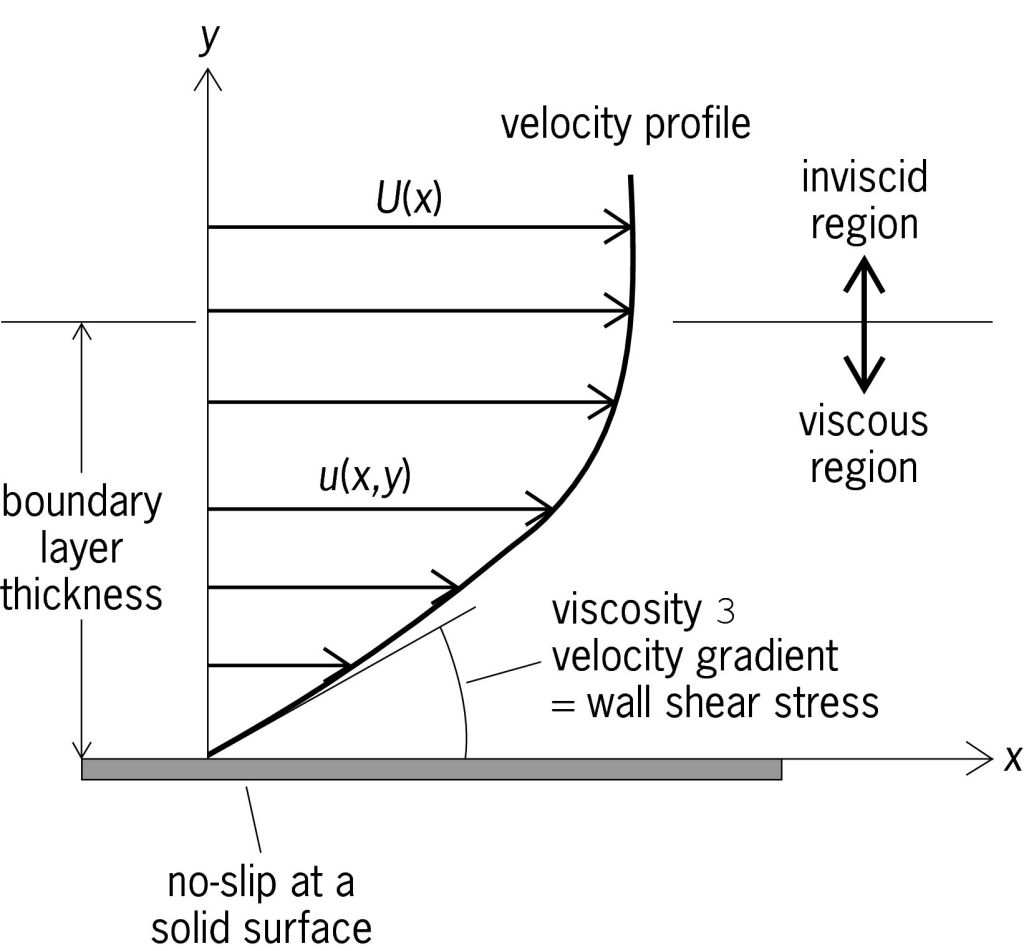 As to why the pool of water slowly diminishes - As the airspeed increases, the boundary layer becomes more turbulent which has higher shear stresses and higher rate of mixing within the layer.

The drops of water around the aircraft do change the shape of the surface locally, same with insects or icing which degrades performance (increased drag, forced transition to turbulence), but the effect is very small.

What does this behaviour of water on the aircraft skin tell us?

Not much really. It's hard to see clear water. Aerodynamicists use oil with dyes instead to visualize the airflow around the surface of the aircraft.

Using this technique, they can spot regions of flow separation and reattachment, spanwise flow and more. This information helps them refine the aerodynamics of the plane.

I'm not an aerodynamic expert by any measure so take this with a grain of salt, but from what I understand, this is because high speed air around a solid body forms a boundary layer. Below the boundary layer, the air immediately around the solid body is moving together at a very low speed relative to the solid body and this reduces to zero on the surface of the solid body.

The main thing it tells you, in practical terms, applies when it's below freezing. That snow you think is going to blow off when you take off will not blow off wherever there is a significantly thick boundary layer (it will generally blow off down to the depth of the boundary layer, which can also be present at the leading edge and although very thin, it can leave enough surface roughness to kill you), which is why airliners are deiced everywhere, not just at the key areas of the leading edges.

25
How do insects decrease aircraft performance?

2
Does the minimum power required for level flight depend on CD0?
3
What is the risk of icing with water / moisture on wings prior to takeoff?
8
How does Reynolds Number affect skin friction drag?
8
Does lift equal weight in level flight?
7
Why does aircraft stability increase when it transitions from subsonic to supersonic flight?
4
Does altitude influence the flight range of an engine driven aircraft?
2
How much might soft skin reduce aircraft skin friction?
1
Does total aerodynamic force include skin friction/shear streses contribution?
1
Does skin friction change with AoA?