Why are/were three-pointer altimeters so prone to being misread?

Further, to quote the NTSB report on the crash of UA389:

This is quite surprising, given that the three-pointer altimeter display works on the same principle as an analog clock face, and even nowadays (with the proliferation of digital clock displays), the vast majority of people can rapidly and accurately read the time displayed on an analog clock; back in the 1960s (before the digital clock was a consumer item), practically every literate adult would have been able to do this. It shouldn’t be hard to translate those skills into reading altitude rather than time, so that, instead of (say) 3 hours (shortest pointer) 25 minutes (short pointer) 32 seconds (long pointer) past midnight, you have (say) twenty- (shortest pointer) -five thousand (short pointer) seven hundred (long pointer) feet above mean sea level.

1: It should be noted, however, that other altimeter styles are not immune to being misread; see, for instance, AA320 and SA228, both involving the misreading of drum-type altimeters.

accidents altimeter
share|improve this question
asked May 26 '19 at 0:45 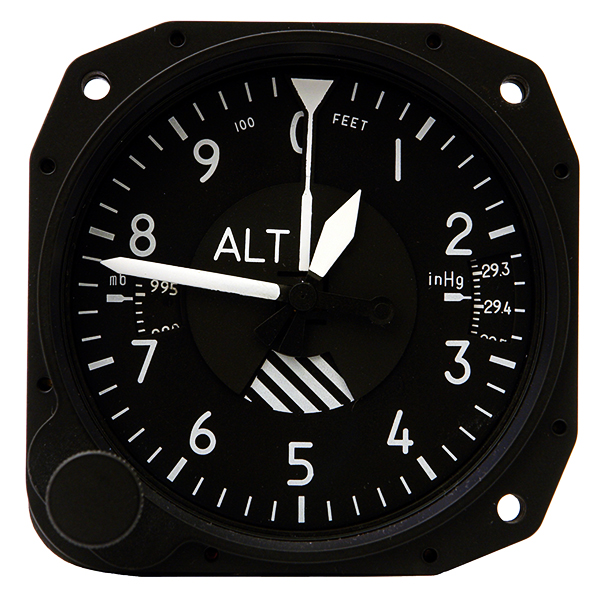 It is a design issue: it looks like an analogue clock but works differently. The long thin one denotes the major units, not the minor one of the second hand. Units can be 10,000, 1,000 or 100 foot. The thousands are probably most intuitive, the 10,000s and the 100 are not.

Perhaps a different story in China, Japan and Korea, where there is a dedicated word for 10,000

Not the answer you're looking for? Browse other questions tagged accidents altimeter or ask your own question.

25
What is the meaning of the crosshatch marking on altimeters?

14
How precise are altimeters?
23
Why are FDRs and CVRs still two separate physical devices?
4
Are there safety countermeasures for test flights that simulate crashed flights?
5
Why are emergency vehicles needed for a runway excursion?
5
Why were DHL611 and Bashkirian 2937 on a collision course?
1
What are “ground-based navigation systems which provide vertical guidance” and how do they compare to altimeters?
9
Are altimeters calibrated to ISA geopotential altitude or ISA geometric altitude?
0
What's the exact moment were the spoilers are supposed to be deployed on a A320?
5
Why, and how, are barometric altimeters accurate enough for approach and landing?