I'm working on a navigation display for a simulation and I want to know if someone can explain me how the navigation display displays the "curved lines" for fly-by waypoints.I know how to calculate the distance needed for turn anticipation and the turn radius but how would a real ND draw this ? I attached a screenshot for the ADMAG2X departure for gatwick from a simulator navigation display but why does the turn start after "KKW02" and "KKW02" is no overfly waypoint ? :) 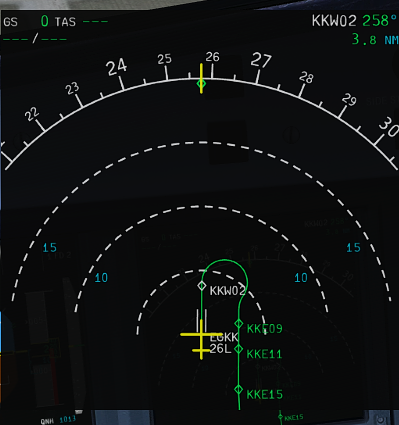 navigation avionics
Share
Improve this question
edited May 30 '19 at 0:28

First, the ND doesn't calculate anything. It just renders the navigation data sent to it from the FMS. Yes, it can pan and rotate and scale the nav data. It also displays the compass rose with heading or track from the IRS/AHRS and various data fields around the edge.

The green line on your ND is the lateral path computed by the FMS. The source data for the path is the flight plan which is a list of waypoints and associated leg types. The FMS builds the path by connecting the waypoints as defined by the leg types (ref ARINC 424).

As you noted, it also builds transitions between each of the legs. They can be fly-over or fly-by transitions. The 'normal' transition is a fly-by. Within procedures defined in the nav database, some waypoints will be coded as fly-over. Others will be fly-over due to the specific leg type. Some legs end at fixes, others end at a 'floating' waypoint such as an altitude.

For altitude terminated legs the FMS can predict roughly where it will be, but ultimately the end of the leg is only known with certainty when the altitude is reached at which time you just did a fly-over of the 'fix'.

In your example, KKW02 is a fly-over because it is altitude terminated. Takeoff legs are typically coded in the database as a VA (Heading to Altitude) or CA (Course to Altitude) leg, commonly terminating at 400 feet above the runway altitude.

The FMS builds the transitions based on the actual geometry of the inbound and outbound legs, bank angle limits from the aircraft manufacturer, aircraft speed, altitude, and what it knows of the wind. The resulting transition will be an arc that is tangent to both the inbound and outbound legs. For large course changes like the one shown in your example, it may require two arcs.

The display gets the aircraft position and track from the FMS/GPS/IRS and heading from the IRS. Based on the pilot's selected display range the display plots out the path on the display.

Not the answer you're looking for? Browse other questions tagged navigation avionics or ask your own question.

7
How do aviation GPS navigation systems report GPS accuracy?
8
Are there any widely applicable models for plausible aircraft auto-routing?
4
Dead reckoning navigation: gyromagnetic compass, how it is stabilized?
12
OBI, RMI, HSI… What combination do GA aircraft w/o glass typically have?
4
Which aircraft manufacturers still include Vertical Situation Displays (VSD) feature in their cockpits?
5
Does an Airbus A320 Navigation Display depict constraints for flightplans other than the primary?
3
Could a pilot navigate using distances and radials from an RNAV waypoint, similar to VOR navigation?