Is the taxi route omitted in low visibility (LVP)?

After reporting vacated, the ATC instruction is quite short (around 2:45). Simply the gate number. (I'm not sure if part of the conversation is omitted during editing, but nothing seems to suggest that.) This is my transcription of it:

As you can see (read, hear), no route is given. I checked the Dutch eAIP but found nothing. The only thing I found is from a Jeppesen chart (dated 2005):

The highlight above hints at, but not explicitly, that taxi routing is not necessarily given – or so I understand it.

If more specificity than EASA is needed, then EHAM would do.

Initially I thought it's a follow-the-greens, but then at the intersection shown below both directions were illuminated:

It has nothing to do with LVP, but with the fact that there are standard routes at Schiphol to the main piers;

The AD 2.EHAM-GMC (Ground Movement Chart) shows the following in the legend:

Late at night, when there is almost no traffic, there is no need to hold aircraft or deviate from the standard route.

The crew is Dutch, they are at their home based, so they are well aware of the routing. So ATC only gives their stand, knowing they will find their way.

There's a double taxiway almost fully around the central terminal area. The outer ring is counterclockwise, the inner ring is for clockwise traffic. The exit for RWY 06 leads straight onto the counter clockwise taxiway. From there you can follow that until A10, which leads you to the D5 gate. There is basically no other way. 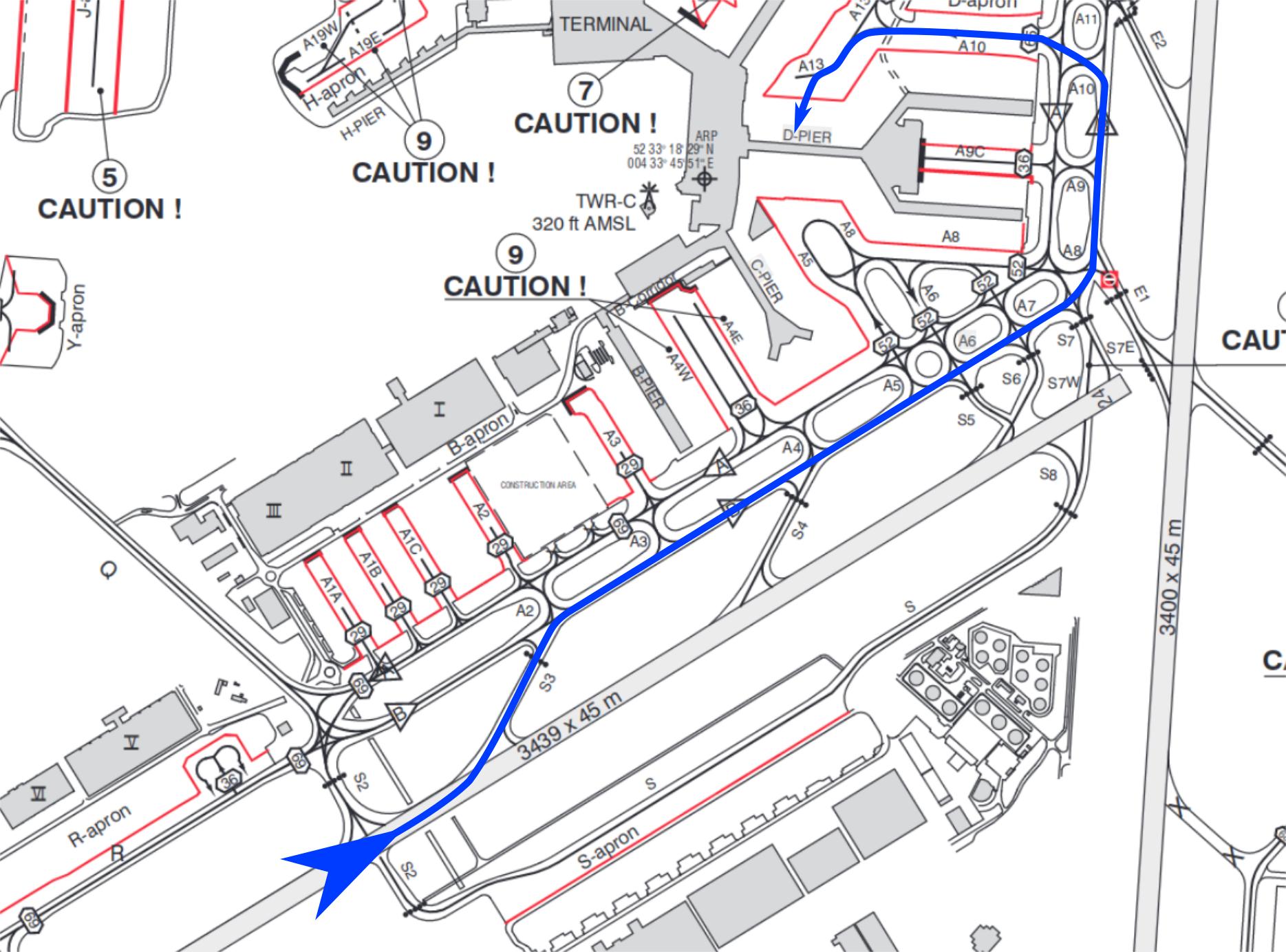 Not the answer you're looking for? Browse other questions tagged air-traffic-control easa-regulations taxiing or ask your own question.

45
How do pilots identify the taxi path to the runway?

16
How does an aircraft taxi?
9
How do pilots maintain awareness of other airplanes during taxi?
7
Where can I find airport taxi instruction "code names"?
45
How do pilots identify the taxi path to the runway?
3
Why is there no instrument taxi system for low-visibility operations?
3
Are helicopters expected to follow the lateral guidance of taxiways in a hover taxi or air taxi?
2
How to correctly interpret the taxi procedures in ICAO Doc 4444?
8
When can a taxi clearance allow me to cross multiple runways?
25
How can this kind of confusion about taxi instructions occur?