What is the largest (size) solid object ever dropped from an airplane to impact the ground in freefall?

What is the record for the largest single solid item that has ever been dropped from an airplane at free fall to the ground?

I can't think of anything dropped from an aircraft larger than the US Space Shuttle when it was dropped from a specially modified 747 during the testing phases of development.

If you consider the space shuttle an aircraft its self, the external tank was dropped after it was depleted and broke up on impact to the Indian ocean. The heavy early version weight 58,000 LBS empty and 1.68 Million LBS fully loaded. While not heavier than the shuttle it was volumetrically larger.

If we're counting the Space Shuttle orbiter, then I'd say it's probably that's probably the winner at around 150,000 pounds. As Juan's answer describes, it was dropped from the Shuttle Carrier Aircraft for glide testing before the first shuttle launches. The orbiter 'glides' about as well as the average brick, so this seems like it should count.

Other possible contenders I can think of:

It's also worth noting that all of these may be soon blown out of the water if Stratolaunch Systems gets their way. The Stratolaunch Carrier Aircraft is capable of dropping 550,000 pounds of rocket stack payload. The first test flight of the carrier aircraft has been completed, but it hasn't dropped a payload yet.

Not dropped from an aircraft, and was part of the vehicle but Saturn V’s first stage was jettisoned at the weight of more than 360000 lbs or 160000 kgs. On Apollo 11 the mass of the first stage was 363425 lbs when jettisoned. After that, it fell freely to the ocean.

The MOAB prototype was 30 feet long and 40 inches in diameter and hard landed. It seems to qualify, but it is a GBU with gridfins, so not totally a dumb bomb. It has almost the same envelope volume as the T12. You'd need an accurate scan of the two to figure out which had the greater volume. 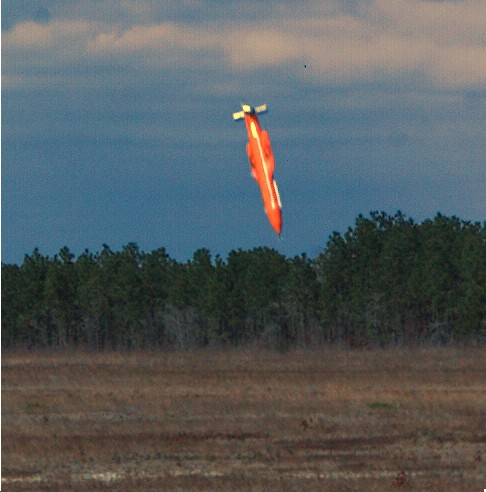 I also seem to recall that large seaplanes were developed to carry boats out to bombed naval vessels. These weren't little rafts, these were plank on frame, wooden, ocean capable lifeboats with diesel engines that could be airdropped.

Several of the D-Day invasion towed gliders suffered catastrophic structural failures while being towed, and became qualifying items as they were jettisoned.

Since you have edited the question to require both "free-fall" and "second use in this fashion" (implying intentional dropping ), the answer is "none". Things aren't dropped out of airplanes on purpose twice.