As shown by this illustration in the SR-71 flight manual, its inlet cones (spikes) retract as its speed increases: 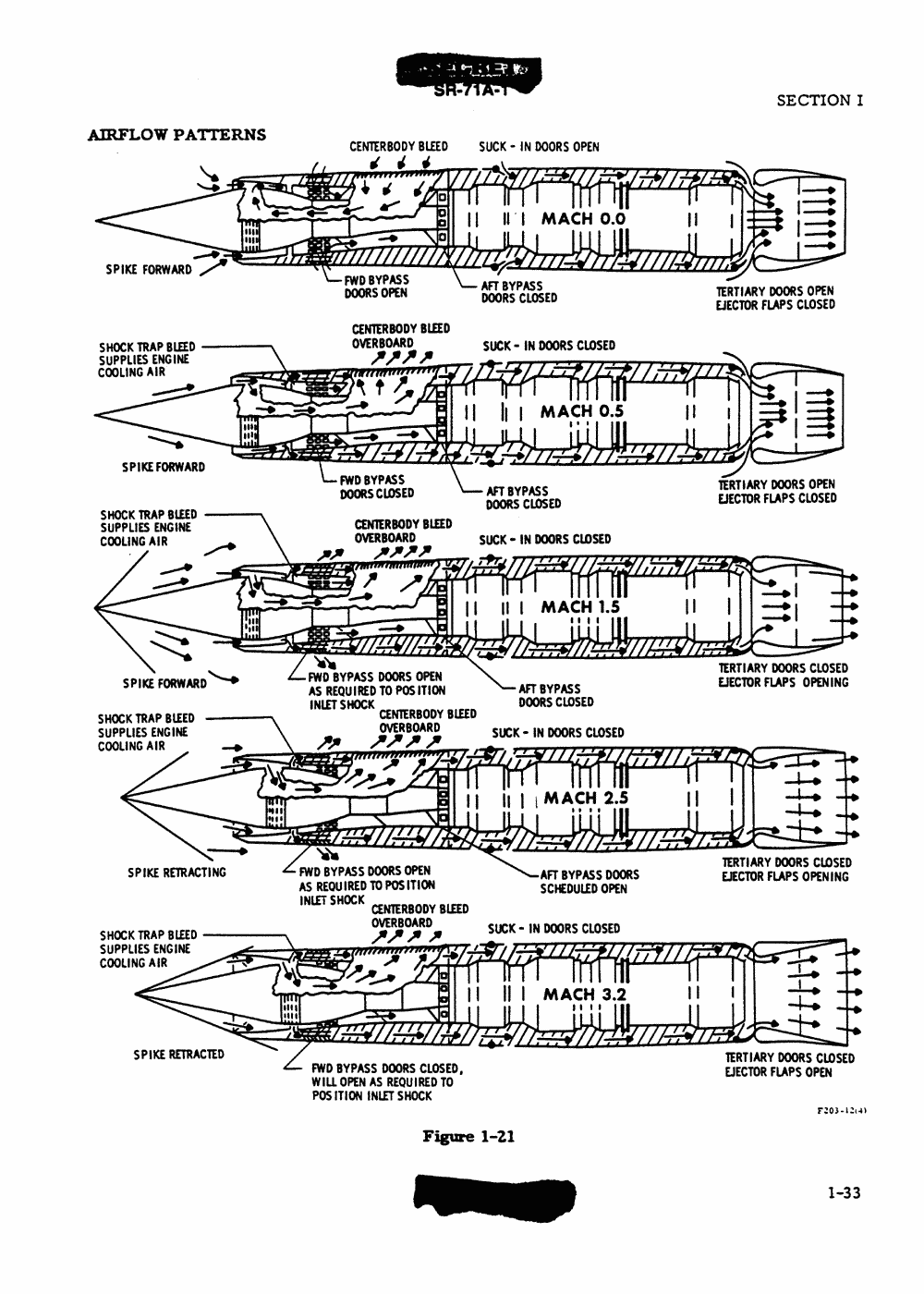 Meanwhile, the Wikipedia page for the MiG-21 describes the opposite behavior for its intake cone:

No source is provided for this part of the Wikipedia article. If the info about the MiG-21 is accurate, why does its intake cone behave differently than the SR-71's? Do the two aircraft's intake cones serve different aerodynamic purposes?

This is only a guess, so please take this with a grain of salt.

If you want to understand why the sr-71 spike retracts I recommend you watch this video. The sr-71 had a quite complex inlet geometry to ensure that the air was slowed down over many oblique shocks. sr-71 engine inlet

On jet engines that don’t have such a complex inlet geometry as the sr-71, the best pressure recovery is mostly achieved by getting the primary oblique shockwave from the spike or inlet ramp, to hit the leading edge of the engine inlet, where it gets reflected as another shockwave.

Unfortunately this answer is going to be speculative as I was not part of the design team for either aircraft. However I would have chosen similar behavior.

The first thing to note, is neither of their spikes are retracting before mach 2.5 (according to the info you provided).

The mig doesn't say what it does above mach 2 but up to mach 2 they are both extending.

Extended spikes are important when traveling at super sonic speeds as your air-craft gives the air in font of it no warning that you're about to hit it.

This means most "aerodynamic" features such as round curves become almost pointless as there is no way to "slowly" push the air out of the way.

For a more detailed explanation of this you can check out this video:

Now as to why they retract at even higher mach speeds you have to remember these engines are turbo jets. Which means ideally you want combustion to happen in-between the compressor and the turbine. This happens best at sub sonic airflow, faster than that it becomes difficult for the fuel and air to mix and ignite.

That means the engines need a way to slow down and regulate the airspeed and that's exactly what the bleeder values are doing behind the spikes. The less air you let into the engine the easier it is to slow down as there is less combined momentum.

If you find more information about exactly when the spikes are retracting in the SR-71 it'd be interesting to read about. However given the diagrams above this is what I think is happening.

9
Why is a higher bypass ratio more efficient at lower speeds?
1
Is it possible to determine the mass flow rate through the engine of MiG-21 during its various cruise Mach no. operations?
8
Why does the MiG 21 use anti surge shutters?
12
Why does the J58 engine of the SR-71 have a diffuser after the inlet spike?
15
Why do the MiG-15 and MiG-17 have a split air intake in their noses?
6
Why do Leading Edge Flaps (LEFs) create lift while down at slow speeds, but decrease lift while down at higher speeds?
5
Why does a subsonic nacelle inlet have a throat before the diverging section?
3
Why is the inlet cone shaped conical?
4
Why are there two red lines on the G-meter in the MiG-29?
4
Do nose cones work well at high angles of attack?