Would this be a dangerous impeller to use for a drone?

I am considering using a 3D printer to make unconventional impellers for a custom-made drone that I am planning to build. I am concerned that these plastic impellers may explode if their motors' RPMs get too high.

Please see the drawing below.

This drawing is showing two views of an enclosed centrifugal blower impeller with forward curved blades and the bottom plate of the impeller has holes in it. I am thinking that the high static air pressure that will be created within the impeller will generate a good amount of lift for the drone.

This design was inspired after I watched a Youtube video about a drone that uses cross-flow fans for lift:

My concern is that if the motor's RPM gets too high, the static air pressure inside the enclosed impeller will get too high and the impeller will explode, sending plastic shrapnel in all directions.

Because of this explosion risk, would it be advisable that I not use this potentially dangerous impeller?

I just want to point out that the blades will be embedded within the enclosed impeller and that the whole impeller is rotated by a motor. The blades will not be part of a separate squirrel cage that will spin within a stationary enclosure that has holes in the bottom of it. 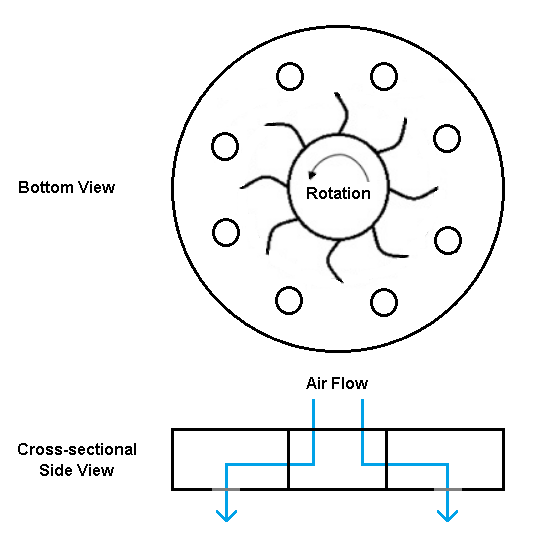 I know those things as squirrel cage blowers. As the video says, they are a good choice if you want to move a moderate amount of air without exposing rotating blades.

Impeller, by the way, was initially the word for a sort of airscrew that is moved by the flow. The small thingy in the nose of the Me-163 rocket interceptor was an impeller and needed for driving the plane's electric generator. Unfortunately, this word has recently been abused to mean shrouded propellers.

The proper name for those blowers is "centrifugal fan", and I will continue to use this word for the remainder of this answer.

As @pericynthion says in the comment, air pressure is less of a concern than centrifugal loads. Basically, the blades spin air around and hurl it to the inner housing of the blower, increasing pressure when the kinetic energy of the swirling air is converted to pressure as the air slows down. If we assume that air comes to a total standstill at the housing (which it doesn't, otherwise the blower would choke), the maximum attainable pressure is determined by the radius of the cage $r$ (in meters) and the rotational speed $\omega$ (in rad/sec) of the blades. $$∆p = \rho\cdot r\cdot\frac{\omega^2}{2}$$ For a 20 cm blower spinning at 3000 RPM this would be 5.9 bar. The centrifugal acceleration $a$ on the blade would be $$a = r\cdot\omega^2$$ which produces 1000 g with the same parameters.

To give you an idea about the efficiency: It is generally desirable to accelerate a large volume of air a bit rather than to accelerate a small amount of air by a lot. Therefore, helicopters use the largest practical rotor diameter, so they can capture as much air as possible for lift creation. Centrifugal fans cannot enjoy the same luxury and can only use the air which enters them from the side. As you can see from the two formulas above, your ideal centrifugal fan runs at a low speed but has a large diameter for the best ratio of pressure over centrifugal loads.

If you build them without regards to the loads, yes, those centrifugal fans can indeed be dangerous. 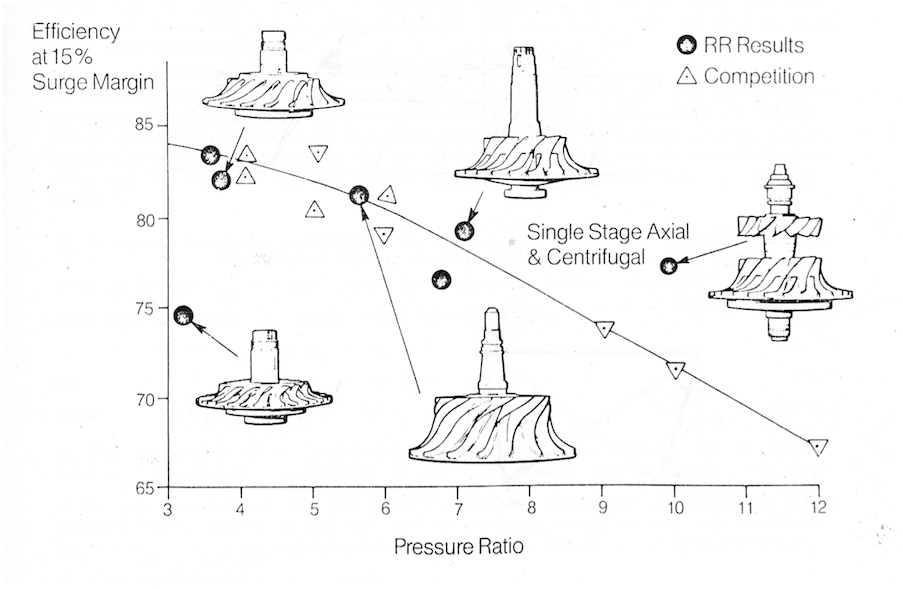 Centrifugal stress on the disk is indeed the most pressing issue. Real life centrifugal compressors can get to a compression ration of about 4.2 for a simple single stage fan, at disk tip speeds of 450 m/s which is the maximum for high tensile steel.

Industrial centrifugal fans work with pressures measured in kPA, up to a max of around 15, so the exhaust pressure ratio = 1.15 which would not cause much of an explosion danger.

So: no, it would not be a dangerous impeller to use for a drone, provided that the tip speed is low enough for the construction material. Note that a proper design allows for an easy inflow and outflow of air, the air path in the OP drawing has right angles which cause flow restriction and turbulence.

10
What legal actions would be taken against a drone pilot if they flew a drone into class B airspace?
17
Would a drone strike be more dangerous than a bird strike?
9
Which countries (if any) allow beyond-line-of-sight drone use?
4
Does a LSA or better license count for drone use?
1
Would a propeller extracting air from a cylinder with holes in it be an ideal lift apparatus for a VTOL aircraft?
2
Will creating a strong back pressure within a ducted propeller enable an aircraft to attain a higher altitude?
6
Would using a drone to pay for something count as commercial use?