Does diving after a take-off help gaining altitude?

I have often read fictions about aircraft, where a pilot does an action that I cannot explain:

During a takeoff with an heavy aircraft (four motors for example), the pilot rolls to the end of the airstrip, and starts to climb. Then he says: I am too heavy to climb enough in order to avoid the mountain/trees/whatever obstacle in front of us. So the pilot starts to dive to the ground in order to gain more speed, and then he climbs again and is able to have enough altitude.

How do you explain this action?

Considering the drag, why does the dive gain enough energy to go to an altitude above the one reach by the take off?

I might not be clear, please don't hesitate to ask details. Here is a schema:

When an aircraft can barely climb after take-off, it may be flying on what is called 'the backside' of the power curve. 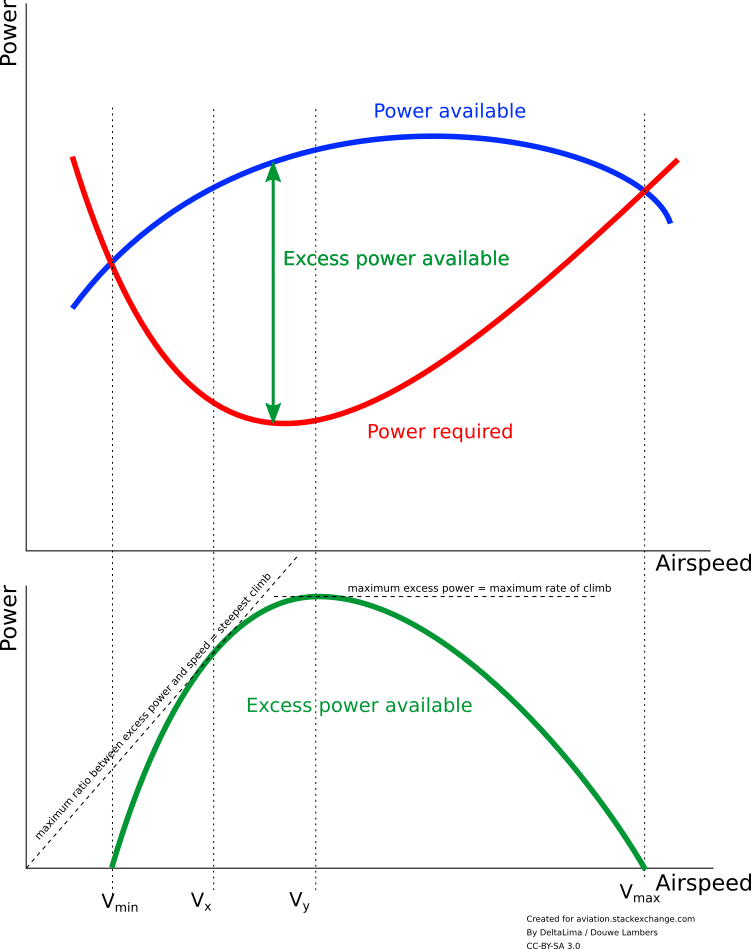 When the aircraft is flying below the speed at which the best angle of climb is achieved (Vx), it will be able to improve its climb angle by accelerating. To do so, the aircraft needs to use available power to accelerate, instead of using the power to climb. 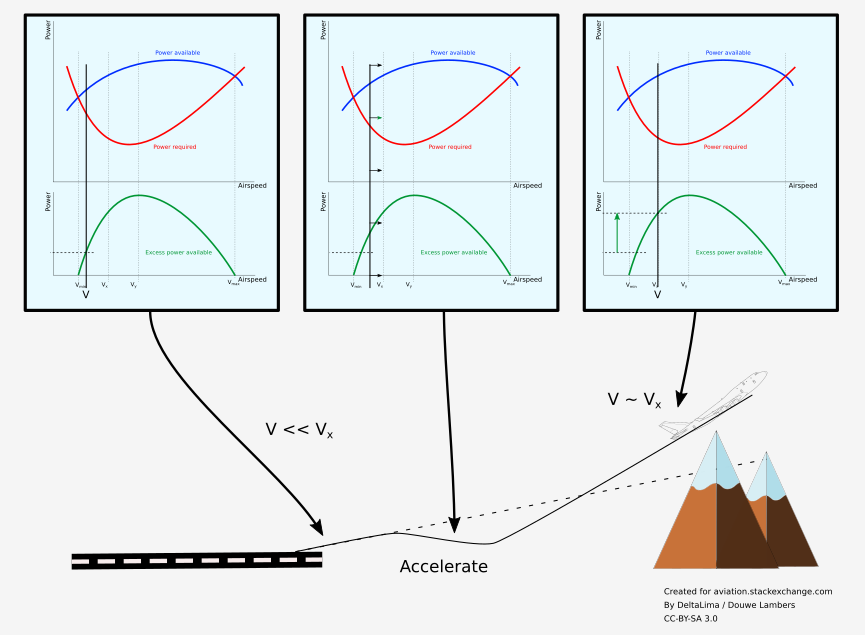 Bear in mind that fiction often (usually?) takes liberties with the truth of a technical situation. That said, let's say your 4-engine aircraft is a Boeing 747-200 with JT9D-7Q engines (because that's what I still have a QRH for).

And let's say the paperwork says you weigh 620,000 lbs—it's an empty freighter you're ferrying from Santiago, Chile to Buenos Aires. You look in the performance tables and come up with the following:

Unbeknownst to you, the ground handling company decided to pick up a little money on the side and put 180,000 lbs of cargo on board for an equally corrupt operation in B.A.

Some miles ahead you have one of the highest MEAs in the world, 24,000 feet as I remember. Mt. Aconcagua at 22,841 feet (highest peak in the Andes) will be just off to your left. You often have difficulties getting that high that soon. You wouldn't make it today.

The solution: lower the nose and speed up.

And by the way, you're probably going to have to land short of B.A. for fuel. Personally, I'd go to Mendoza, Argentina.

The Pilot's Operating Handbook (POH), which is specific to an individual airplane, lists two speeds of interest: Vx and Vy. Vx is the obstacle clearance speed, and Vy is the maximum rate of climb. Vx is less than Vy.

Flying at Vy, the plane will climb more quickly (e.g. how long will it take to reach say 1000 feet above the airport) but because you are moving faster over the ground at Vy, you still might hit that mountain because you get to it sooner.

Flying at Vx sacrifices airspeed for altitude. At Vx you are flying more slowly and are climbing as fast as the plane can. It maximizes your vertical speed, not your horizontal speed.

As altitude increases, Vx and Vy converge and when they do, you are at the absolute altitude limit for your plane.

In your example, it sounds like the plane took off at Vy, noticed the lack of sufficient climb performance, leveled off or descended to gain speed, and continued the climb at Vx.

I have omitted a discussion of ground effect flying as it would be highly unusual for your four engine large airplane to remain in ground effect for long.

The only time it will work is if you are below Vx, and you do not need to dive to pick up speed under power, reducing pitch angle to level should be enough. Actually did this once with a model that was too rich (prop RPM slower) and had gained considerable weight from numerous repairs.

Essentially, you climb in stepwise fashion. If airspeed bleeds off below Vx, reduce pitch and keep climbing. But doing a rotation at proper speed and climbing at Vx is the best chance of clearing an obstacle.

What you have depicted is more like a zoom maneuver, which might help insure clearing one row of trees if you are slower than Vx, but a mountain 10 miles distant needs Vx right after liftoff.

Not the answer you're looking for? Browse other questions tagged takeoff airspeed or ask your own question.

22
Why do the engines seem to power down and then back up after take-off?
10
How does early rotation increase the likelihood of a tail strike at take off?
10
Why is the IFE only available after take-off and shut off before landing?
19
What is a take off roll?
16
Why not use flaps in take off from High Density Altitude airport?
4
In an emergency situation just after take off, is fuel dumping useful?
17
How does a taildragger take off? Does it rotate?
7
What performance issues/symptoms can a pilot expect while taking off above MTOW?