How is rotor pitch best managed in helicopter autorotation?

In a recent stack exchange question writers were comparing autorotation to an aircraft engine out rotation prop when something rather startling occured to me:

In an engine out the airflow will continue to rotate the prop on the same direction as with power. When helicopter loses power, WRT to rotor, it falls "backwards", creating force AGAINST the powered direction of rotation.

The thought is to go negative pitch and allow the rotor to build up angular momentum in the same direction as powered rotation, then switch to positive pitch to use that energy to flare and land.

Is this how it is done?

No, that is not how it is done: minimal collective blade pitch is not negative. The procedure is to lower collective immediately to the full down stop to minimise blade drag, upon which the helicopter will start to descend. The air upflow tilts the local lift vector forwards. Indeed, just like in a glider.

The bit that is not intuitively clear for fixed wingers is the reference frame of the airflow, which is the local blade velocity.

The inner bit of the rotor blade has a lower rotational speed than the tip. The up flow has a relatively larger influence on the lift vector tilt here, and upflow through the rotor drives the inner part of the rotor blade forward, while the outer part still experiences decelerating torques. From Leishman: 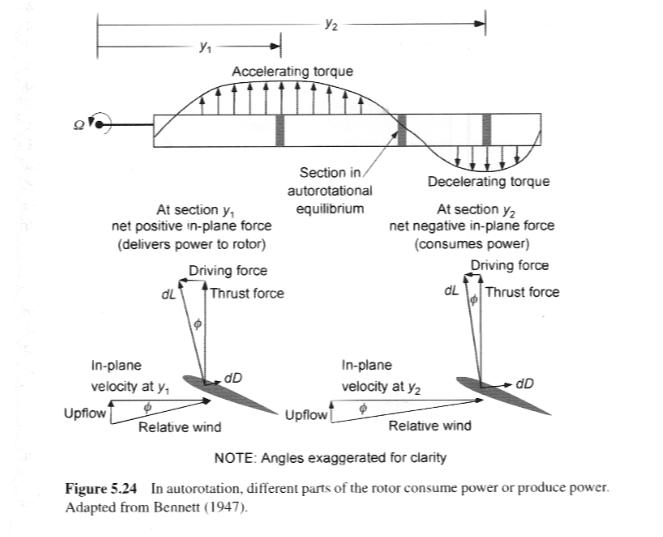 It's similar to a fixed wing airplane really, except that it's happening in a circle. It's done by reducing the rotor blade pitch to the minimum when power is initially lost, by lowering collective, to ensure the blades are able to maintain airspeed (in the form of rotor RPM), then adjusting pitch with collective as necessary to keep RPM in the green arc.

The autorotating rotor is being driven around by the same forward thrust component of the lift vector that moves a gliding airplane forward. The autorotating rotor is just like two gliders passing each other and who's wingtips stick together because the tips were made of Velcro, forcing them to glide in a circle centered around the joined wing tips.

In an autorotation landing, inertia is used to convert forward energy of the blades to additional lift energy. As you come out of the autorotation after the landing flare, you go back into "powered mode" you might say, by pulling pitch, changing the flow through the rotor from upward to downward as when the engine was running. Except the "power" you are using isn't engine torque, it's just the inertia of the rotor blades. You have a couple of seconds to use this inertia before the RPM decays and down you come.

It's a bit like settling a gliding airplane on the ground by pitching the nose up and trading inertial energy of the plane into temporary increased lift.

Going to try an answer to bring a few power off lifting techniques to light.

Notice the descending rotor has its leading edge pitched UP in some diagrams, whereas a gliders leading edge is always pointed down. Simple pool hall physics tells us which way the object will be deflected by the airstream.

There for, an autogyro, like a glider, will control its speed by pitching up or down, but a rotor in vertical descent with no sideways movement must alternate between generating RPM with negative pitch and lift with positive. In reality it can be set for a little bit of both, but the autogyro approach seems to be safer.