Why does an increase of airspeed result in a decrease of angle of attack?

In Chapter 02: Aerodynamics of Flight of Helicopter Flying Handbook, on page 10, it says:

Induced flow velocity is increased, resulting in a decrease in AOA.

I don't understand how airspeed can change AOA. Looking at other posts on the topic, it seems that everybody assumes that to be true without an explanation. Can anyone tell me why?

PS: the statement above explains why there is a positive stall region in a helicopter's retreating blades when the rotor speed is too fast.

On page 2-10 under the heading "Induced Flow (Downwash)", the book is making the point that if you have a wing moving forward horizontally at some fixed speed relative to the ground and some fixed positive pitch attitude relative to the horizon, and you surround the wing with a descending airmass, the wing's angle-of-attack will be less than if the airmass were not descending. A rotor blade of a helicopter can be viewed as such a wing, at least at a given instant in time.

The book is using the term "induced flow velocity" specifically to refer to the downward velocity of the airmass caused (induced) by the rotor blades. I.e., downwash.

The exact sentence you quoted was under the subheading "Out of Ground Effect (OGE)". Since the ground is no longer acting like a "floor" to impede the downflow of air through the rotor system, you have more downflow than you would in ground effect.

If you were hovering in ground effect and the ground suddenly disappeared, the downflow velocity would increase and the angle-of-attack of rotor blades would decrease.

The induced flow is the flow pulled through the helicopter blades, which is largest in the hover out of ground effect. 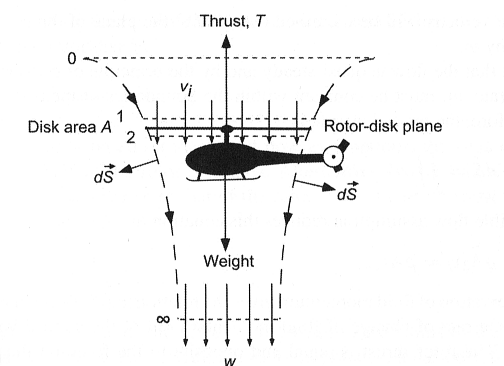 Adding a vertical speed pointing straight down to the relative blade speed, decreases the angle with the resulting velocity vector. 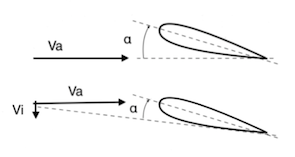 To express it at the most basic level:

There's a small but significant mistake in the FAA handbook. As your airspeed increases there is a reduction in induced flow, resulting in a decrease in blade AOA.

Another way of thinking about it is to consider a fixed wing airplane as it speeds up. To maintain the same amount of lift as it accelerates, the coefficient of lift and angle of attack go down. The same is true for the advancing blade of helicopter. Until you reach the bottom of the power required bucket the reverse flow region on the retreating blade is quite small and not too significant.

Not the answer you're looking for? Browse other questions tagged aerodynamics helicopter airspeed angle-of-attack or ask your own question.

12
How is the induced drag calculated for a wing with elliptical planform?
1
Why is subsonic lift at 25% of chord?