Acceleration of a supersonic aircraft after breaking the sound barrier

People on the physics stackexchange recommended I ask here, so I am pasting my question regarding supersonic aircraft.

I stumbled upon an interesting plot; in particular, the dependence of wave drag on the Mach number: 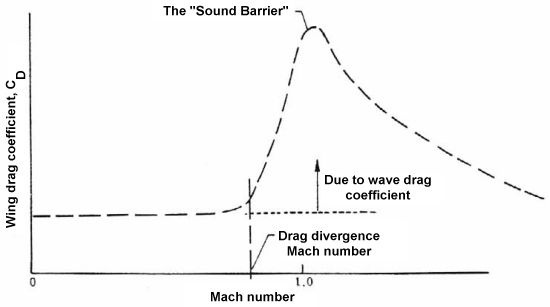 Assuming these relations, one can taylor expand the equation for the drag force to find that

It seems that this criterion could indeed be satisfied in air, as the right hand term in the inequality is a fairly small number.

Is there anyone that could elaborate further on what actually happens to the drag force as the plane breaks the sound barrier? Do the plane engines lower their power in order to maintain reasonable supersonic cruising speed, and if they didn't, would they be under too much heat load?

Your Taylor expansion only uses the first two terms, so it is only a crude approximation. But still, your observation is correct, however, whether it applies depends on the aerodynamic quality of the particular aircraft.

Practical supersonic aircraft have been designed to minimize the Mach drag peak. The ways to do this should be familiar:

If this is properly done, the drag peak will be small enough to have overall drag increase with Mach number above Mach 1. In case of the F-16 the drag coefficient rises from 0.02 (subsonic) to 0.045 (Mach 1.1) and stays roughly constant with increasing Mach number, so the absolute drag still grows with speed squared. No significant decrease in the drag coefficient occurs because of the complex flow around the entire aircraft. Only when you have a poor design will drag actually become lower at low supersonic Mach numbers.

Another factor is thrust: Since ram pressure at the intake increases, so does thrust of the same engine as speed increases. This is the main reason why Concorde could already super-cruise 20 years prior to Lockheed marketing inventing this term. 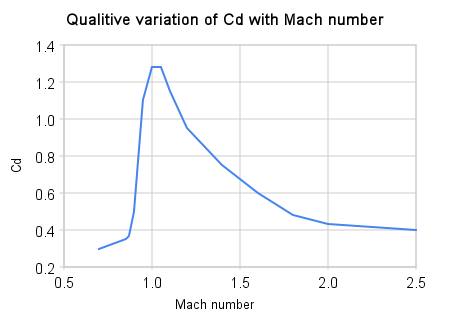 This is noticeable in practice: Concorde used its afterburners to accelerate from Mach 0.9 to 1.7 (while climbing), and then shut down the afterburners for its Mach 2 cruise flight.

Whether the total drag force drops, I don't know. But the difference in Cd is a factor of 3, while total drag has a v2 term, which would mean a 4x increase going from Mach 1 to M2, so total drag still increases.

Not the answer you're looking for? Browse other questions tagged drag supersonic or ask your own question.

60
Why can't jet engines operate with supersonic air and how do they slow it down?
24
How exactly did engineers come to the final design of jets like the F-16 or SR-71?
24
In what way are the Concorde's engines considered efficient?
8
What is compressibility drag?
3
Is wing sweep needed on supersonic aircraft?