Does ATC clear IFR helicopters for a visual approach if landing at a helipad on a high-rise?

There are no "off-airport helipads" because a helipad is an airport. Actually, anywhere an aircraft lands is an airport as far as the FAA is concerned. It would be just like any other IFR to any other airport with no approach procedure: ATC can clear them for the visual approach if they have reasonable assurance that the weather at the airport is VFR, or the pilot can cancel IFR if they determine the weather is VFR. Public helipads have CTAFs just like any other public airports do. They can be found on helicopter charts, or in the Chart Supplement. In the attached chart snippet, you can see that the CTAFs at East 34th Street and Wall Street are 123.075 and 123.05. 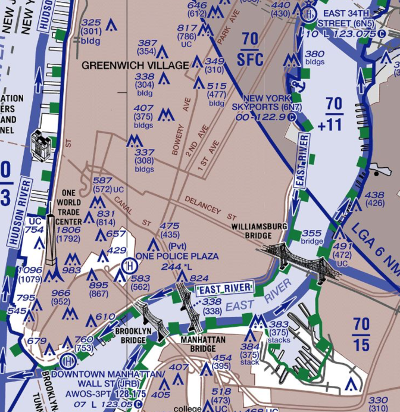 One Police Plaza does not have a published CTAF because it is a private airport. Other helipads in the area are also private and not explicitly depicted.

Not the answer you're looking for? Browse other questions tagged faa-regulations air-traffic-control usa approach rotorcraft or ask your own question.

19
Do you need clearance from ATC to switch to a different approach at non-towered airport?
4
When is an aircraft handed over from Center to Approach?
9
What is the maximum interception angle for ILS when on radar vectoring?
2
What are a few main differences between ATC interactions for rotorcraft vs fixed-wing?
5
Why wouldn't KJFK offer the ILS for 22L?
3
Does an airport need to have at least one instrument approach that I can use in order to fly IFR to it?
2
Is it possible to fly VFR above the IMC floor or VFR-On-Top without a specifically filed route, both using an IFR flight plan to go through IMC?
2
Is it a violation to list an alternate airport based on an approach your aircraft is not equipped to execute?
4
Is some sort of clearance, such as a clearance to enter nearby controlled airspace, required to legally fly in IMC in Class G airspace?
2
Can I fly the LNAV MDA when the GPS is set up for LPV?