What do compressor/turbine stages mean, and why we need a different number of stages?

I am new to aviation. I realize that LP (Low Pressure) and HP (High Pressure) compressors/turbines have a various number of stages.

terminology turbofan
share|improve this question
edited May 10 '19 at 17:59

A piston engine compresses air by enclosing it in a chamber and then "closing in the walls", so to speak, with the piston so that the air has nowhere to go and it gets mechanically compressed. The piston engine is a movie theater with the doors locked and walls that close in.

On a jet engine, you are compressing air by squeezing it into a smaller space in a constant stream, depending on the velocity and inertia of air mass to do the squeezing. It's more like a movie theater where there is an open exit and you yell "Fire" so people at the exit are being squeezed together and crushed by the mass and inertia of the larger crowd behind them all being forced into the same spot.

For this to work efficiently and get a decent compression ratio, you have to impart energy to the air stream all along its path down the converging passage it's on. It's like having the theater exit being a converging hallway with people stationed along its length, in stages you might say, giving theater goers a big shove so that by the time they are going through the small exit they are running at full speed and everybody is able to make it through.

An axial compressor is just a big fan with multiple blade elements, stages, (with stators in between to manage the flow direction for the next stage) that moves the air along in baby steps all along the convergent path to the inlet of the burner can. How many stages is a design balancing act - more stages, more compression, but more weight and complexity; so somewhere on a given engine there is a sweet spot in the number and design of stages and the designer has to find it.

Engines get broken up into LP and HP compressor/turbine sections when it's desirable to split the compressor into independent segments, each with its own turbine to drive it, that are free to turn at different speeds, which makes the engine able to handle larger variations in inlet flow. The number of stages in each section is a function of the compression ratio the designer wants to achieve with each compressor section. A dual spool configuration like that adds weight and complexity, so there has to be a payoff operationally to be worth it, so you will some engines with two spools and some without.

For axial compressors (what you'd find in a typical turbofan), each stage is:

They're called rotors and stators, respectively. So those two rows of blades are one stage.

The rotors increase the air's velocity, the stators turn this velocity into pressure, and repeat (see image below). The following stage would compress the air more, and so on, incrementally increasing the pressure.

Likewise but in reverse for the turbine stages (the fixed blades also come first). 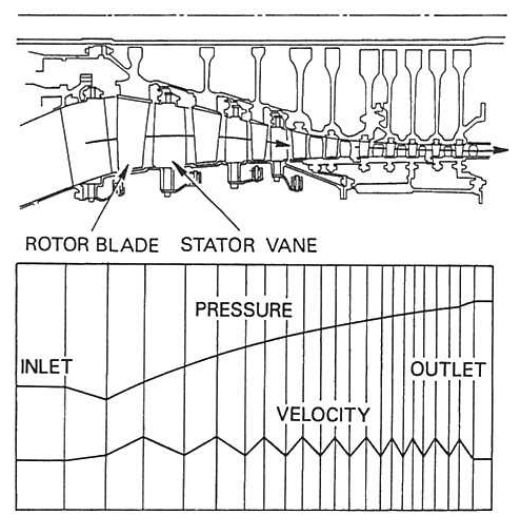 Not the answer you're looking for? Browse other questions tagged terminology turbofan or ask your own question.

6
Why do turbofan engines have low pressure compressors?
7
What is the difference between a Boeing Line number and a Block number?
10
Why do many large turbofans have a gap (of turbine blades) between the LP turbine and HP turbine?
18
Why do large turbofans generally have many more LP turbine stages than HP turbine stages?
4
Why does the Trent XWB have intermediate compressor stages?
3
Would there be a purpose for a set of compressors in an electric turbo fan?
10
If the efficiency of a turbofan engine is 35%, where does the rest of the fuel energy go?
2
In the modern aviation context, is the word “supercharger” generally assumed to mean a gear-driven system rather than an exhaust-driven system?