How does the CFM LEAP-1B engine achieve the same efficiency as the LEAP-1A despite its lower bypass ratio?

The CFM LEAP engine comes in 3 variants (1A, 1B, 1C). The larger LEAP-1A and LEAP-1C variants have bypass ratios of 11:1, while the smaller LEAP-1B only has a bypass ratio of 9:1. For turbofan engines, we know that the higher the bypass ratio, the higher the propulsive efficiency of the engine, which results in a lower fuel consumption.

So how does the CFM LEAP-1B engine achieve similar efficiencies to its larger siblings when its bypass ratio is considerably lower?

turbofan engine-design bypass-ratio
Share
Improve this question
edited May 9 '19 at 3:02

Take a low BPR engine and add to it a bigger fan, now you have higher BPR. Does that mean better efficiency? No. The reason is simple, by keeping everything the same, the same combustor/turbine do not have the right power/design to turn the now bigger fan at the optimum speed (slow fan).

But if you use a smaller fan on an already high BPR engine, which is the -1B case (approx. 8 inches smaller), then the thrust will be lower, which is indeed the case (approx. 130 vs. 143 kN). Since the combustor and OPR (overall pressure ratio) haven't changed, they can easily drive the now smaller fan at the right speed.

The other benefits the -1B have that may offset the lower BPR are the lighter weight (2 fewer turbine stages), lower duct loses, and the Max's cruise Mach, which is 0.01 faster than the neo – the slightly faster speed means slightly less time burning fuel for the same distance, and also slightly better inlet compression.

The LEAP SFC values aren't public yet. The official statement is:

That can also mean compared to the CFM56 of the respective plane, which is different for the A320ceo and 737NG:

The main reason there has been an increase in BPR in recent times, is because of the higher OPR they've been able to design (powerful small cores). Without OPR, you can't drive big fans at the right speed using small cores.

The slide below by Safran also shows why BPR alone is not the full picture: 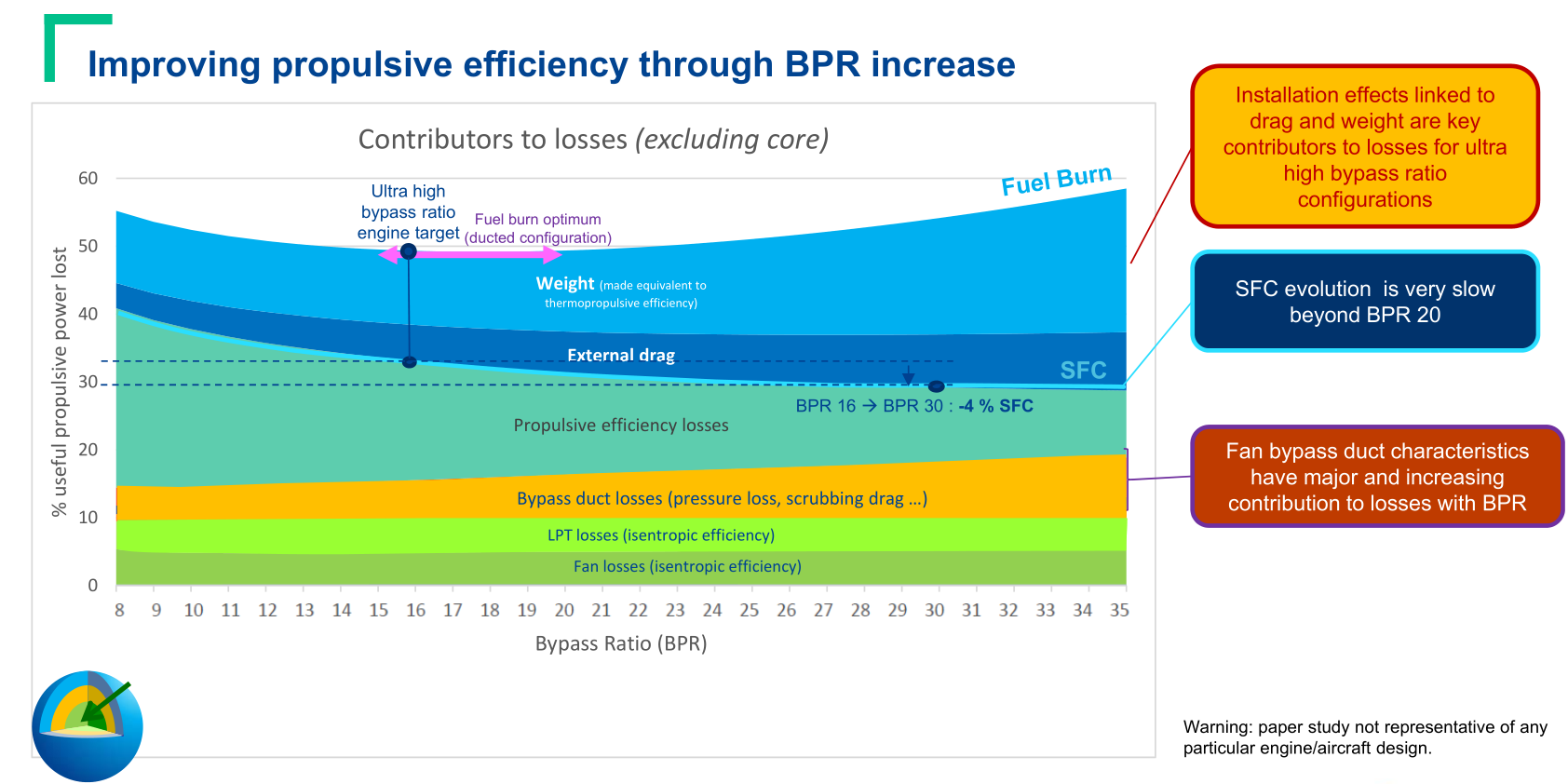 Related: Why does the CF6 have a lower bypass ratio than the TF39?

In addtition to the previous answer...

Higher BPR means larger fan and lower RPM. But in the LEAP familly the fan and booster (LP compressor) are on the same shaft driven by the LP turbine. And the booster optimal RPM is higher than the optimal fan RPM. The smaller LEAP-1B fan has a higher fan RPM which helps to increase the compressor efficency.

To increase even more the BPR without loss of compression efficency the fan and booster RPM must differ, which can be obtained using a 3rd shaft (Trent familly) or a gearbox PW1100G.

8
Why does the CF6 have a lower bypass ratio than the TF39?

12
What drives and/or allows the move to higher-bypass turbofans on jetliners?
9
How does the efficiency of a turbofan compare between take off speeds and optimal conditions?
4
How do aircraft engine manufacturers achieve a higher bypass ratio while still meeting the thrust requirements for a given aircraft?
17
Can high-bypass turbofans cruise at high altitude?
8
Why does the CF6 have a lower bypass ratio than the TF39?
3
How does the power distribution change for a turbofan engine from being stationary to going at full speed?
10
If the efficiency of a turbofan engine is 35%, where does the rest of the fuel energy go?
2
Why can’t the newest high-bypass turbofans run at their EPR, temperature, and RPM limits simultaneously at sea level?
2
Is it true that high-bypass engines are inherently inefficient at higher speeds?