Is the 737 Max's AOA disagreement warning light an actual light?

When Boeing began delivering its 737 Max to customers in 2017, the company believed that a key cockpit warning light was a standard feature in all of the new jets.

But months after the planes were flying, company engineers realized that the warning light worked only on planes whose customers had bought a different, optional indicator.

The warning light notifies pilots of a disagreement in the sensors that measure which direction the plane is pointed, a potential sign of a malfunction. This light could have provided critical information to the pilots on two flights that crashed shortly after takeoff in recent months.

Because only 20 percent of customers had purchased the optional indicator, the warning light was not working on most of Boeing’s new jets. Neither Lion Air nor Ethiopian had the indicator.

note: All instances of boldface have been added for emphasis.

My question is asked to clarify the nature and appearance of the warning light itself.

Is this a physical light bulb-based indicator on a physical panel, or is it graphically implemented within a flat panel display screen? In either case, if the option described above was not purchased, is the (now non-functional) warning light still present and visible?

In that case, is there any secondary visual indication that would allow one to know that it's not working?

In the B737MAX, being a full glass cockpit, the light 'AOA Disagree' is indicated by an alert on the PFD (rather than a physical bulb). This is why Boeing was selling it as an option: it is just a software change to show or hide 'AOA Disagree'. 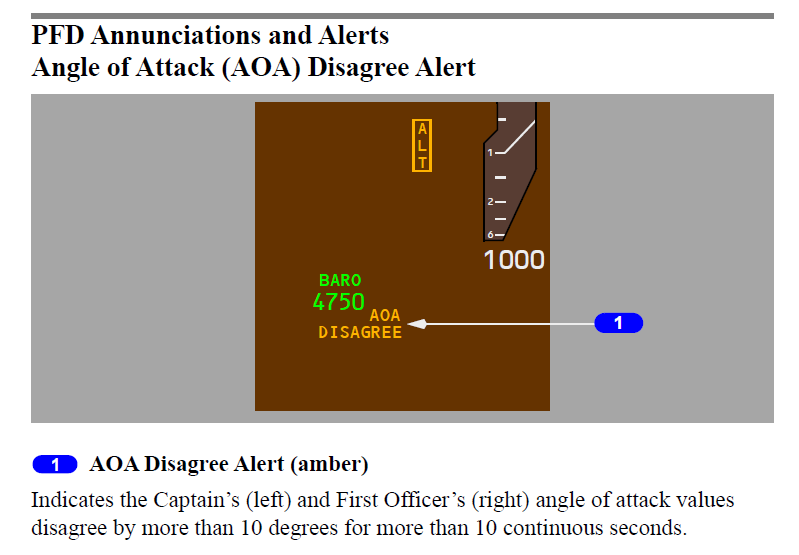 Not the answer you're looking for? Browse other questions tagged boeing-737 display or ask your own question.

43
What are these five indicators at the front of the 737 passenger cabin?
1
Is the 737-800 circular PFD for AOA or RA?
4
Why is Germany not able to read data from the Boeing 737 MAX black boxes?
7
If the updated MCAS software needs two AOA sensors, doesn't that introduce a new single point of failure?
4
What would be the impact of replacing the engines on the 737 MAX, not just reworking MCAS?
28
Is it true that different variants of the same model aircraft don't require pilot retraining?
17
Why didn’t Boeing ramp 737NG production back up in response to the 737 MAX groundings?
4
Why doesn’t the A320 family suffer from the same design constraints regarding engine placement/landing gear length as the Boeing 737 family?
5
Why does the 737 Original have an explicit hydraulic-quantity indicator for only the A hydraulic system?
8
Why doesn't the 737 MAX have an APU EGT gauge like all other 737s do?