What does the “nose-high” product of inertia represent?

I am reading this slide: 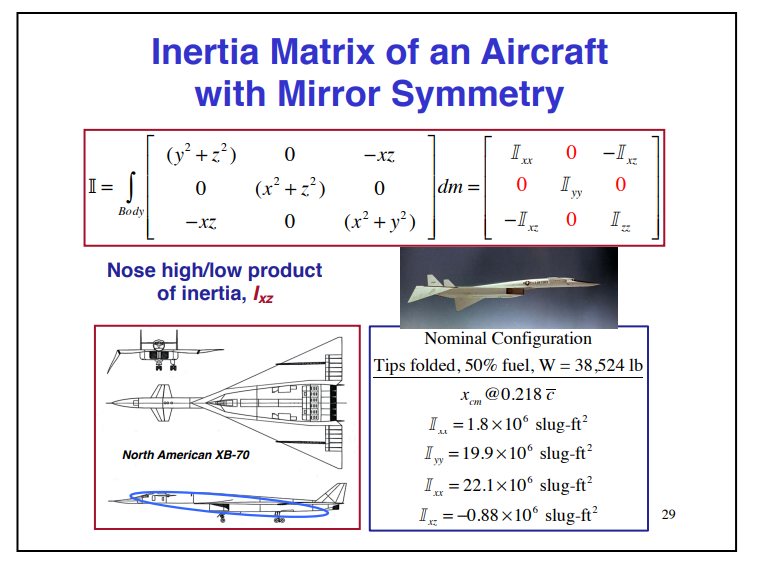 Is Izx always considered small and we can assume it is 0, as many texts assume?

I need to make this clear: This is the body axis: 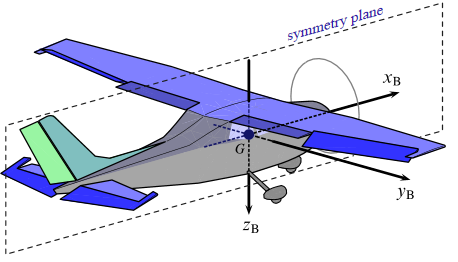 I assume that G is the center of mass, GZX is the symmetry plane. So Iyz = Iyx = 0. But why is Ixz zero? Do they rotate the body coordinate system around Y axis so that Ixz = 0?

This is an addendum to @ROIMaison's answer based on the modified OP.

I assume that G is the center of mass, GZX is the symmetry plane. So Iyz = Iyx = 0. But why is Ixz zero? Do they rotate the body coordinate system around Y axis so that Ixz = 0?

The coordinate axes are completely arbitrary. By convention, the x-axis aligns on the symmetry plane and points from nose to tail. However, one can choose literally any orientation. You can, of course, align the axes such that all the cross inertial products are zero; such axes would be the principle axes. But obviously this would only work for a single configuration, fuel distribution, etc.

To answer your question more succinctly, no, we don't change the axis once the initial drawings are made. The coordinate system stays fixed and becomes the body axis. For a conventional design, the cross products would be fairly small and would not be a big deal to ignore for first order flight dynamics analysis.

What would happen if you align the axes weirdly such that the cross products are all large and non-zero? Nothing really, it just complicates your math and modeling, and your angular velocity $[p,q,r]$ would be hella confusing. But physics would work out just right.

The $I_{xz}$ moment of inertia is a measure for how the weight is distributed in the xz plane.

You can obtain it by multiplying a unit of mass $dm$ by its distance in $x$ and $z$ from the center of gravity and taking the negative of it.

If you look at the plane in question, you can see that it has a nose - which we can consider as one of the blocks - which is

If we plug this in the formula, we see it leads to large values of $I_{xz}$. Similarly, there is also a lot of mass in the lower-right corner

In essence, everything that is on the x-z line contributes to this value, and as we see from the marked area in the image of the Valkyrie, there is a lot of mass around this line.

If your aircraft is symmetrical around the x or z axis (in terms of as much mass above/below front/aft the axis) you will get a low value of $I_{xz}$.

I guess that is the case for many aircraft, so they make the assumption of $I_{xz}=0$.

More information about the rotational moment of inertia can be found here.

If, say, the left wing would be heavier than the right wing and the right canard much heavier than the left canard, there would be an additional, nonzero I$_{xy}$ term. Due to the left-right symmetry this term is also zero for the XB-70. More generally, if the aircraft mass distribution can be represented by the sketch below, the cross-coupling terms (those with unequal indices) are nonzero.

Unequal mass distribution: The long rod represents the fuselage with its X-axis (dot and dash line) while the cg symbol represents an additional mass mounted at a distance from the X-axis. Without that additional mass, or if the mass would be at the center of the rod, the I$_{xz}$ term would be zero indeed. You need both: Distance in X and in Z for it to add I$_{xz}$.

Now imagine the arrangement above is rotating around the X-axis: The centrifugal force on the additional mass will add a strong pitching moment, pulling the arrangement into a vertical orientation. This does not happen without that extra mass or without a lever arm of that mass in X direction.

Most aircraft don't have this misalignment between body and inertial X-axes, so for them it is correct to set I$_{xz}$ to zero. Notable exceptions are the Douglas X-3 and a range of McDonnell-Douglas aircraft like the F-101 Voodoo and the F-4 Phantom II: Here the inertial x-axis was pointing down relative to the body axis and artificial stability augmentation had to be added to avoid roll inertia coupling.

Not the answer you're looking for? Browse other questions tagged aircraft-physics or ask your own question.

3
In a non-symmetric turn, how do the side slip angle and thrust side slip angle affect the equations of motion?
19
Does lift equal weight in a climb?
5
What are the missions of high-endurance aircraft?
3
Do swept back wings affect the moment of inertia of an aircraft enough to be relevant for the roll response?
18
How does the F-35B not flip over during transition?
8
What are accurate flight simulation models called? Is there a standard model?
8
What is the “compression ratio” of air hitting the nose?
1
Why did the Wright brothers take steps to increase the amount of vertical surface area forward of the CG on some of their aircraft?