What regulatory load cases drive the structural design of aircraft?

What I am looking for here is a sort of a list gathering the manoeuvres and/or load cases imposed by regulation that lead to the sizing of a part of an aircraft. For instance, vertical gust load is often the load case that has to be used to size the structural parameters of the horizontal tail (bending moment). What are the other load cases and manoeuvres that usually size the subparts of a commercial aircraft ?

The applicable US regulation is FAR 25.301-563. This obviously goes into a lot of detail about the different aspects that should be taken into account. I will try to condense the cases as much as possible, but many are conditional and relate to various other conditions. Many cases include some subjectivity as to what the FAA will require. Every certification is unique.

While the requirements are somewhat broken down into the general areas of the plane, it's impossible to say exactly which areas of the plane will be critically affected by a certain case. The impact depends on the design and configuration of the specific plane.

There are the upper level requirements:

(a) The structure must be able to support limit loads without detrimental permanent deformation. At any load up to limit loads, the deformation may not interfere with safe operation.

(b) The structure must be able to support ultimate loads without failure for at least 3 seconds...

(e) The airplane must be designed to withstand any vibration and buffeting that might occur in any likely operating condition up to VD/MD, including stall and probable inadvertent excursions beyond the boundaries of the buffet onset envelope.

Definitions of various important values (which will have structural implications):

All strength requirements must be met at all places within the maneuvering envelope, particularly A-I on the following V-n diagram: 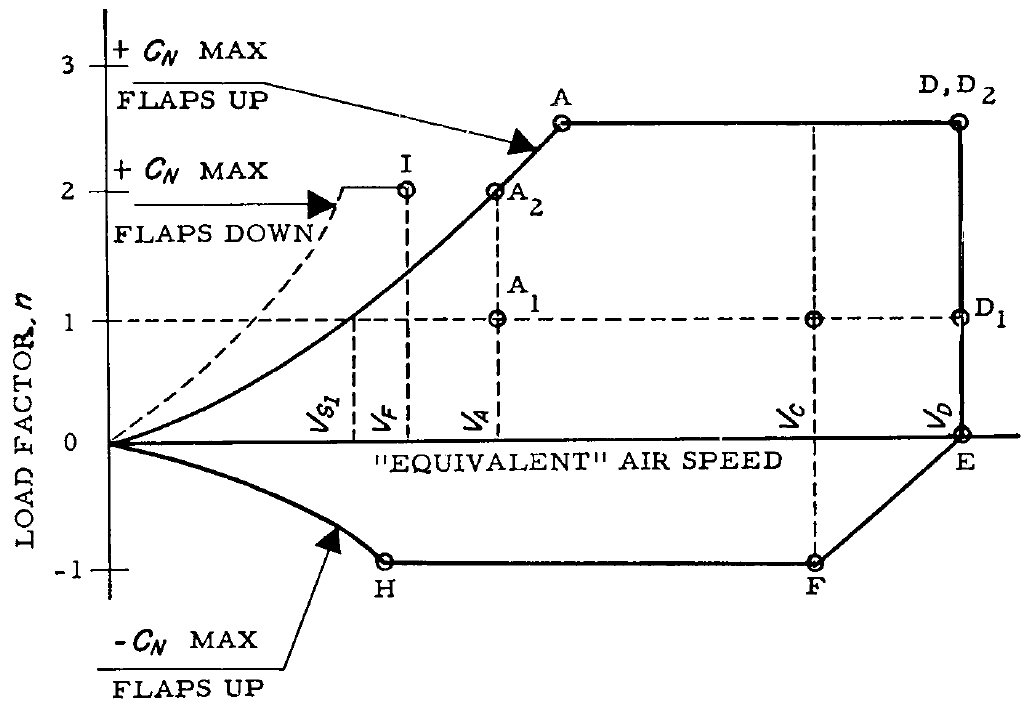 Not the answer you're looking for? Browse other questions tagged aircraft-design maneuver or ask your own question.

33
Why do we never see high-bypass turbofan engines sharing the same nacelle on large airliners and similar aircraft?
1
What types of maneuvers increase the load factor on the aircraft?
12
What is the meaning of “Docile pitch behavior” in the context of Pugachev's Cobra?
12
Why does an aircraft pitch up when the speed increases?
7
Why would a stretch variant need a larger horizontal stabilizer?
6
What are the issues involved in converting a quadjet into a twinjet?
30
Would an 8% reduction in drag outweigh the weight addition from this custom CFD-tested winglet?
2
Does dihedral improve roll stability in gusty conditions?