What is the time derivative of the angle of attack?

Suppose a flying missile's velocity vector has components $u, v, w$, as illustrated below.

From my knowledge of flight dynamics, the angle of attack is

where $q$ is the second component of angular velocity, $Z$ is the third component of the total force, and $m$ is the mass of missile. How can these two formulas be the same?

The second equation is the change in angle of attack as an inertial response to a force or moment acting on the missile.

Assuming that there isn't an error in the books you've read:

Both formulas are true. It's true that

and it's also true that

From this, we can conclude that

Both of these two formulas describe the way that the angle of attack changes, but they describe it in different ways.

First we can use the definitions of w, u, alpha, and beta to define

Now lets look closer at the first equation you provided using the definitions above:

Which can be simplified further with trig identities to

Why The Term For Z?

Why is force included here? Because angle of attack and pitch are measured in different frames and a change in airspeed could cause you to overestimate or underestimate the new angle of attack. This isn't novel or particular to the case of missiles, as a similar equation appears in Real-Time Aerodynamic Parameter Estimation without Air Flow Angle Measurements by Eugene Morelli, and I've seen similar kinematic equations used in avionics. 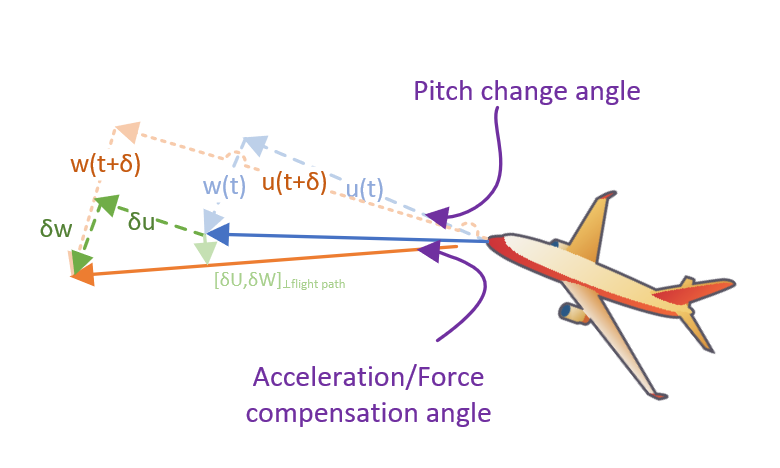 Now the piece omitted in other answers. The kinematic equations of motion as shwon in Morelli, et al:

Plugging in the definitions for u,v, and w as function of V, alpha, and beta into these equations and then inserting those into our formula for the derivative of alpha gives (see Morelli, et al. for more information)

Note that even though we used calculus and trig identities, not kinematics to get this equation, it matches the expected rotation matrix for angular rates between the body frame and the wind frame, using this example, or also this question:

We can convert those pesky accelerations (well, pesky if you're not trying to measure them, then they're really handy) and include gravity in the total force:

So with some generous assumptions that sideslip and roll rates are small so p*sin(beta)≈0, that Z includes gravity already, and that Z is mostly aligned perpendicular to the incoming wind, this equals your original formula, we've shown that

p,q,r = roll, pitch and yaw rates in the body frame

u,v,w = Components of aircraft velocity along the body longitudinal, lateral, and normal directions

ϕ,θ = Roll and pitch in the inertial frame

T_fz = Total force perpendicular to the flight path, pointing in opposite direction of angle of attack

I think the equations are not referred to the same axys.

The second equations looks to be referring to the rotation of the missile referred to an inertial frame of an external observer (for example, Earth), so actually, it looks like the actual movement of the body frame refered to that observer in a specific rotation component .

Imagine an example, that I am able to provide the right thurst to the missile in such a way that I keep u, w and q constant rotating in a circle.

In this case, the angle of attack will be constant and its increase 0 with time but the second alpha will be increasing/decrasing with a constant increase/decrease, also this change will be linked to the circle rotation.

I think you can also make the math and relate both equations (you will need more components!) taking care of inertial forces.

Final comment, as you are introducing as well a second term in teh second alpha equation, it really looks that it is an specific case in the movement of missile.

Not the answer you're looking for? Browse other questions tagged aircraft-physics missiles flight-dynamics or ask your own question.

4
What is the difference between Body Pitch Rate and Inertial Pitch Rate?

4
Which of these is true for a glider flying with constant angle of attack?
5
How does the angle of attack vary in turns?
3
How does Bernoulli's principle contribute in lifting airplane?
3
Is the elevator really an 'angle of attack control' as described in Stick and Rudder?
1
With flight dynamic equations, how do I return to positive alpha if alpha is always negative with negative w?
1
Calculating angle of attack during bank