How could MH370 fly west to Straits of Malacca within time frame without being seen on Radar? [closed]

Prior to May 2014 Malaysia claimed MH370 was seen on radar flying IGARI-VAMPI-GIVAL-IGREX, but when asked to produce radar tracking data for this could not do so.

In the Preliminary Accident Report published 1st May 2014, the report stated unequivocally that it was not seen on LUMPUR civil SSR radar after 1:21am until next seen in the Straits of Malacca on military radar. Malaysia could not or would not publish radar imagery for the mystery aircraft sighted in the Straights of Malacca, however on 21 March they displayed this image at the Lido Hotel in Beijing which they claimed showed MH370 in the Straits of Malacca: 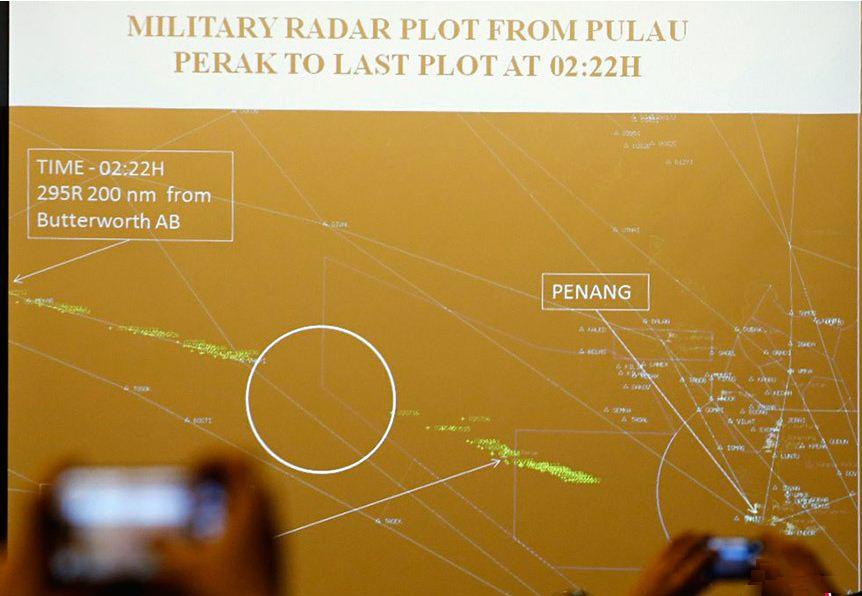 By default therefore this image has become the de facto radar image for MH370's flight which incidentally does not show MH370 flying IGARI-VAMPI-GIVAL-IGREX.

This is part of that image with time stamps made clearer by focus sharpening tools: 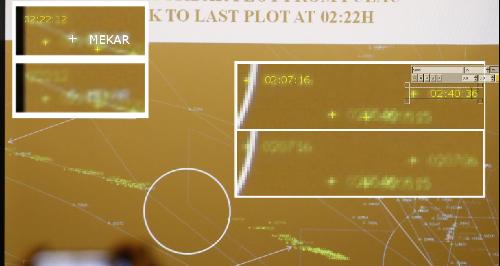 Using the time stamp imagery it is now possible to calibrate that flight more precisely by measuring the time elapsed over known geographical points and then creating a calibration scale beside the track.

That calibration suggests that this aircraft flew over a small island, Pelau Perak at precisely 2:03am on a track leading back to the southwest tip of Palau Penang.

The preliminary accident report also notes MH370 was reported by Ho Chi Minh being lost over waypoint BITOD at a time which is inferred as 1:24am MYT. The Preliminary Accident Report issued by the Malaysian Government states unequivocally that it was lost from radar at BITOD.

This poses a serious problem since it appears to only allow MH370 39 minutes to return to Pelau Perak at the maximum speeds for low altitude flight.

This flight over a track distance of 338nm requires an average TAS airspeed of 520kt. Something which requires the aircraft to fly at altitudes where it would logically have to have been seen by several radar stations. Radar at Aceh and at Singapore must have seen MH370 flying west flying at 38,000ft yet they did not.

If MH370 flew west at these altitudes it should have been seen by at least half a dozen radar stations. Malaysia however claimed that it flew back at 5,000ft like a fighter plane to evade radar and flew low over Kota Bharu. How could it do all this if it had to maintain a speed only achievable at 38,000ft? 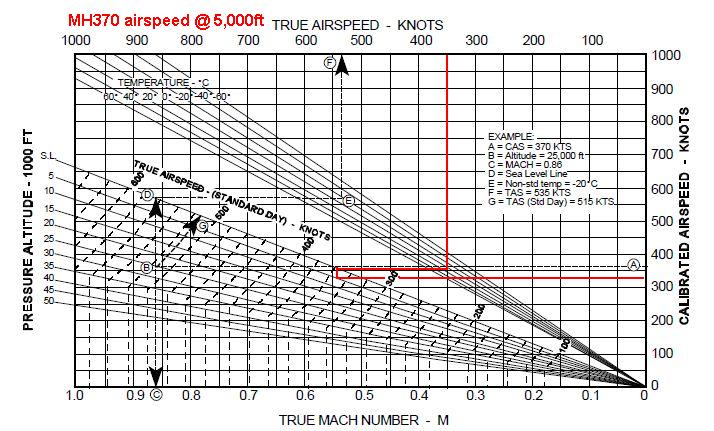 The air temperature at Kota Bharu was 22 deg C and there was a light nor-easterly breeze of between 5-10 knots.

VMO for a B777 with this surface temperature is 350 knots TAS at 5,000ft. At this altitude logically it could not have flown west within 39 minutes. Even if one is generous and allows that it turned back at IGARI affording another three minutes it still does not seem credible since the track would still require 54 minutes of flying. 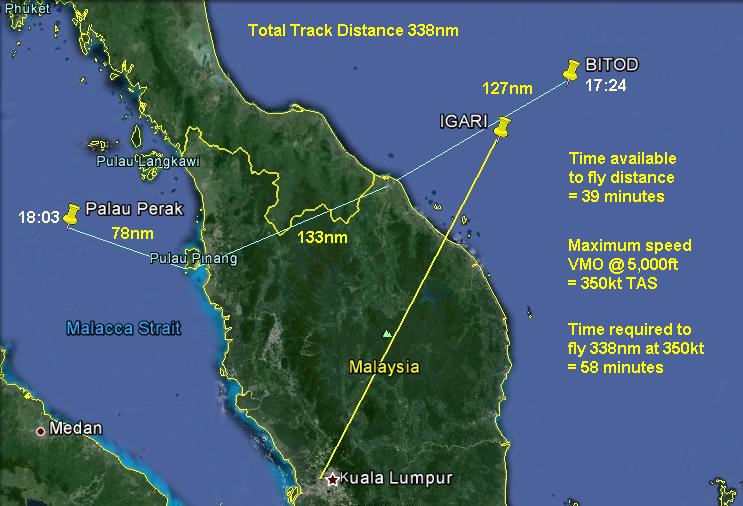 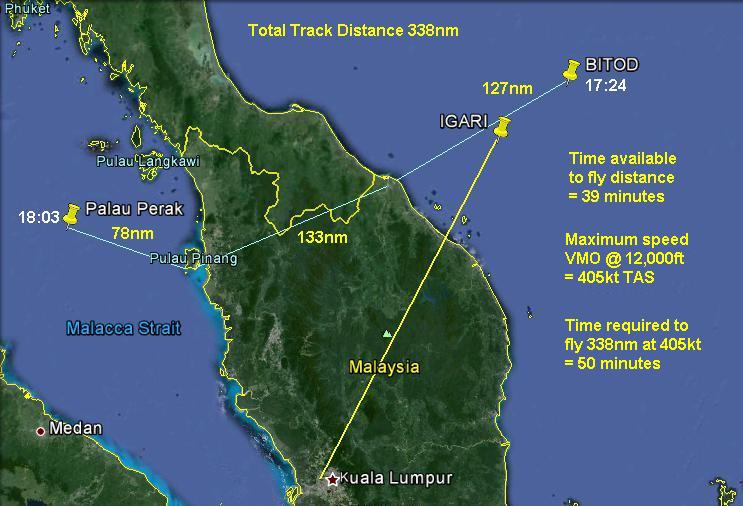 So the question is how did this aircraft fly back west so fast without being seen?

Did it fly low, or did it fly high?

JAL750 was at least 398nm away from IGARI. Had MH370 dropped to 5000ft and flown west it would have been out of VHF range to speak with JAL750. This image has a circle for the estimated radar horizon between JAL750 and another aircraft at 5,000ft. 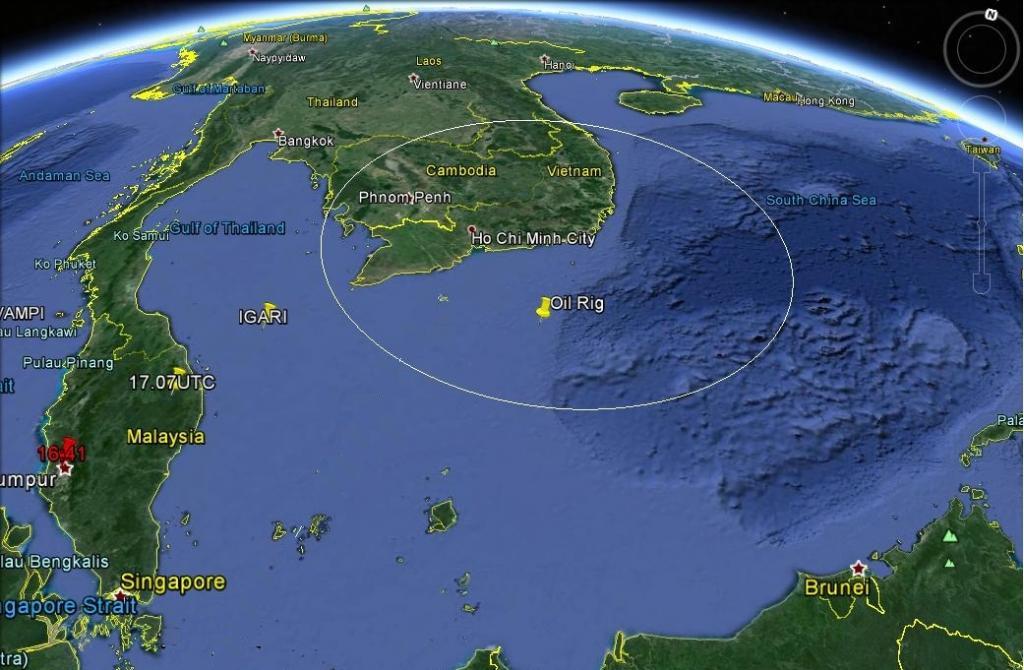 I would appreciate if I someone could give a cohesive explanation for apparent inconsistencies in the official account?

The essence of your question seems to be

Did Malaysian officials claim MH370 flew from BITOD to Palau Perak in 39 minutes?

Use of waypoint names by officials

It is clear (to me at least) that when officials talk to the press, they use waypoint names rather than baffling the journalists by reading out lengthy sets of latitudes and longitudes. Waypoint names are less likely to be confused or mistranscribed than lengthy sets of digits. It is also likely that as the information passes from technical staff examining logs up to officials, that indigestible coordinates are simplified to waypoint names to help those officials quickly grasp the essentials. I believe it is a mistake to infer any specific accuracy such as *within 1 nm of the named waypoint", It is probably best to interpret any mention of a waypoint as meaning the aircraft was closer to this waypoint than to any other major waypoint.

When an official reports that MH370 flew on a route between IGARI and VAMPI, I believe it is a mistake to infer that they mean the aircraft flew from a position precisely at IGARI along a "straight line" to a position precisely over VAMPI. I would infer no more than the aircraft spent some time in a large area bounded on the east by IGARI and bounded on the west by VAMPI and that it was headed in a direction that took it more towards VAMPI than IGARI. It might have flown roughly SW or roughly W or any direction in between.

Again, I would interpret that generously. It doesn't mean that MH370 was within some immeasurably tiny distance from BITOD.

There is of course also the possibility that the "radar blip" was a flock of birds.

I note that there is no mention in the document above of HCM's record of the time the "radar blip" was somewhere closer to BITOD than to IGARI.

You say "at a time which is inferred as 1:24am MYT." but you don't say who made that inference and you don't provide any references to official information. The question would, in my view, be a lot better if it gave references (links) to official Malaysian documents for each claim made.

Since the question doesn't show that the Malaysian government stated that they believe MH370 was at BITOD at 1:24am MYT, it isn't possible to identify any inconsistency.

On the very heavily annotated images you show, it looks like the label "Palau Perak" was added by some anonymous person and was not present on the original slide shown at the press conference.

To draw firm conclusions, I believe, you really need to make use of more direct and clear information.

At the moment, I don't think there's sufficient primary evidence to identify any incontrovertible inconsistency. I look forward to seeing some better references edited into the question.

Not the answer you're looking for? Browse other questions tagged air-traffic-control aircraft-performance mh370-incident or ask your own question.

20
What is a counseling session with the FSDO/FAA?
27
I accidentally deviated from an ATC instruction as a student pilot. How bad was it?
14
How can ADS-B replace primary radar when FlightRadar24, using ADS-B, is so inaccurate?
5
Is there any reason to have ADS-B out that is not based on GPS?
8
Reasons for significantly lower than normal approach
46
Can ATC handle a flight as emergency although the pilots have not declared an emergency?
7
How unusual were MH370's final ATC exchanges?