Don’t seats that recline flat defeat the purpose of having seatbelts?

Virtually all first-class airline seats, and many to most business-class seats, recline all the way down, either as lie-flat seats (where the seat reclines to a 180º seatback-seatpan angle, but the fully-reclined seat is still tilted somewhat forwards relative to the cabin floor) or flat-bed seats (where the seat reclines to a truly flat surface that can also, as the name indicates, serve as a bed).

These seats are, of course, equipped with seatbelts, but I’m having great trouble seeing how even a tightly-fastened seatbelt would provide any protection to a flat-lying occupant, as any significant longitudinal force would cause the occupant of the seat to slide under the belt and out of the seat.1 2

Although these seats, like all airline passenger seats, are required to be locked in the fully-upright position except in cruise flight, this still leaves the occupants (especially those in flat-bed seats) vulnerable during the (sometimes quite long) portion of the flight when they are allowed to recline their seats to flatness; a moderate head-on (or tail-on, for that matter) gust would be enough to separate these occupants from their fully-reclined seats, as would any other event capable of suddenly increasing or decreasing an aircraft’s inertial speed too quickly for the “fasten seat belts” sign to provide any warning (not, as noted above, that fastening their seatbelts would actually provide any significant degree of protection to the occupants in question, but it could conceivably induce them to derecline their seats in preparation), such as a flight-control malfunction or evasive action to avoid a MAC (both of which produce large speed excursions secondary to rapid changes in attitude and altitude).

For that matter, even vertical accelerations with no longitudinal component would still be expected to injure flat-lying passengers more severely than those in an ordinary sitting position, for reasons illustrated below: 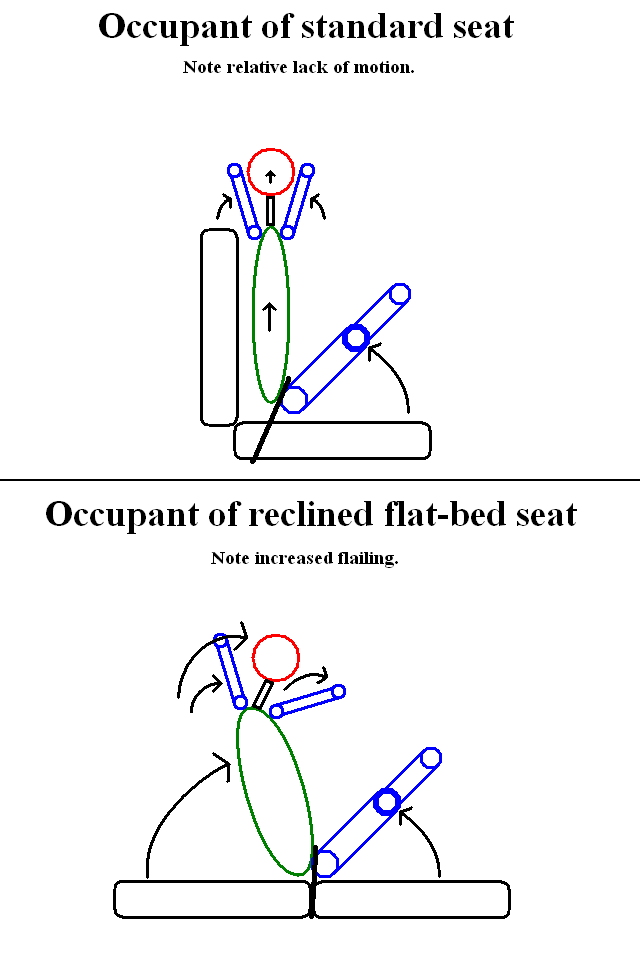 Am I missing something?

1: This is known as submarining, and is a major problem with car seatbelts (even with seats that don’t recline at all), which are much harder to fasten tightly around the pelvis than aircraft seatbelts.

2: If the belt were fastened tightly enough to pin the occupant to the seat even under considerable longitudinal force, this would

For example, after a 2015 severe turbulence encounter, investigators determined: "In the first event, the peak vertical acceleration forces recorded were + 1.7 and + 0.14 g. In the second event, peak vertical acceleration forces recorded were + 2.21 g and −1.32 g," not that much greater than the kind of acceleration you might feel in a car if you drive really aggressively. That's enough to throw unrestrained passengers and objects about (just as if you slam on the brakes in a car), resulting in injury, but it's a much smaller acceleration than what you'd see in a 30mph car crash. Nobody would consider being slammed against their seat belt like that, whether they're seated upright or reclined, to be enjoyable, but it beats slamming your head into the ceiling.

Forces much larger than that exceed the design load limits required for the aircraft, and once you're beyond that and the required safety factor, your biggest worry is the structural integrity of the aircraft, and you're less concerned about whether people's limbs flailed about.

In the case of an actual crash (such as the 16g standard new airplane seats are tested to), lying flat could pose a much larger risk of injury, but that's beyond the design specifications of the seat, which are tested with test dummies in a normal upright position. There aren't a lot of survivable crashes that occur without warning during the cruise phase of flight (page 22).

Car seats can also be reclined, and the diagrams the NHSTA produced of the results of crashes in those cases (see, for instance, page 41) are remarkably similar to yours. This is why "bring your seat to the upright position for landing" is a standard requirement.

Yeah, even in the strongest wind gust longitudinal acceleration or deceleration is not a problem; we are talking only fraction of a G. During cruise flight sudden turbulence causes most damage and there the vertical component is critical. Even then the experienced vertical accelerations are negligible when compared to car accidents. They are enough to toss people and equipment around if not properly secured but again, the acceleration is usually less than a G.

Airframes are certified to -1/+2,5G vertical acceleration with additional margin of 50% so structural failure is likely to occur way before car wrecking forces are encountered.

I reckon turbulence (i.e. vertical acceleration, pitch and roll) is the issue based on experience in the cheap seats and reports of in-flight injuries. It's not 100% predictable, and if you're fully reclined or asleep (as you've noted) it takes time to react so some protection is probably a good idea. Loosely fastening the seatbelt keeps the passenger from being thrown off the bed and landing somewhere hard, or even just rolling over the edge of some seats (many of the first-class ones appear to be a bathtub shape with padded sides so that would be less of an issue, but others don't have much between them and the aisle).

A similar approach is used at sea: on the overnight ferries between the UK and France there are bed-belts. These don't have to double as seat-belts for take-off/landing so tend to be elasticated and often (but not always) have two fastening points on one side but only one on the other. They're a big help if the ship is pitching and/or rolling, which of course means vertical acceleration if you're far from the axis.

Keeping you in your seat is not only for your benefit. If the plane experiences sudden vertical motion (turbulence / air pockets etc) then people bouncing all around the cabin would be a touch messier than people "flailing" (lol) in their own seats.

I've seen this, during air pockets over Seoul. Most passengers were buckled in, but one or two passengers were up. As the plane lost altitude suddenly, the people not strapped in were flung against the ceiling, and then slammed back down to the floor as the plane's fall was stopped. Fortunately none were seriously injured, just bumps and bruises. If there had been even a slight sideways component to the plane's sudden motion then these people would not have landed in the aisle or back in their seats. They would have landed on someone or something else. Imagine a large person landing on a child or elderly person. Or anyone landing head first on an armrest.

It's not perfect, but "increased flailing" is a smidge better in a general sense than the alternative...

16
Why don't airlines provide smoke hoods?
8
Why do you have to keep your seat belt fastened after landing?
5
Why do airlines require passengers to return to their allocated seats for landing?
6
Reclined seats for take off and landing
8
Why aren't angle-of-attack data sanity-checked before being fed to other aircraft systems?