What rotors would be best for atmospheric reentry?

What rotor blade set up would be the best for entering Earth atmosphere or to shed speed before landing in place of a parachute?

I understand that the longer blades are more efficient, but are not as strong. The link below explains how this might be used. 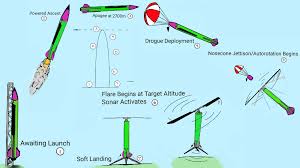 Related: Would an aircraft with contra-rotating propellers longer than the plane's wingspan be able to fly?

You couldn't do it to control reentry, but you certainly could do it for a vertical landing system that might be a bit less technically demanding than a rocket that can descend under control with its engine running as SpaceX does.

You are limited by the mach# of the tips of the rotor, which have to be subsonic while spinning. You would want a rotor that can fold alongside the rocket and deploy and accelerate to operating RPM once it's approaching the surface, and reduce the descent rate to an acceptable level where the craft can land with its gear absorbing the landing shock in a zero forward airspeed autorotation.

This is not hard to do with a well designed gear and there are gyrocopters with gear that is designed to handle zero-forward speed autorotation landings (basically, they can cope with high descent rates by using long-stroke shock absorbers).

The rotor would simply be the simplest, lightest, cheapest system that you can come up with, that the landing gear can handle. If you could do it with two blades you'd go with that, but maybe packaging would require more blades, and you'd have to find some sweet spot with the best overall landing performance between the rotor and landing gear, and your physical packaging limitations.

Not the answer you're looking for? Browse other questions tagged propeller experimental-aircraft blade hypersonic rotor-head or ask your own question.

23
Would an aircraft with contra-rotating propellers longer than the plane's wingspan be able to fly?

6
What would happen if the blades of a variable pitch prop did not all have the same pitch?
9
What does YF stand for?
5
What contra-rotating propellers would be appropriate for this engine?
2
What are the FAA's requirements for an experimental type certificate?
3
What is the correct equation for rotor solidity?
4
Would it be beneficial to have rotors AND propellers instead of a tiltrotor?