Where is the radio PTT button on a Robinson R22 helicopter?

I have some combination of joysticks and a rudder that I'm trying to use for helicopter flight simulation on my PC. Where is the radio PTT button on a Robinson R22 helicopter?

You can't realistically mimic the feel of the R22 controls with a joystick because it's an unusual configuration. I've done both simulated and the real thing so trust me when I say it's going to be radically different. This is the Robinson R22 control column: 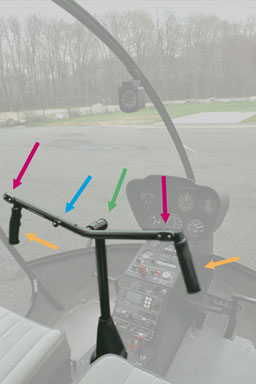 The R22 has a bent T shaped control arrangement with the control column in between the 2 seats. The T is connected at the pivot point (green arrow), the handling pilot pulls the stick down towards their lap, pulling the other side up. Instructors have to learn to fly with their arm in the air sometimes. The red arrow points to the intercom and PTT buttons. The intercom button is not always there, newer versions generally have a voice activated (VOX) intercom so no button is required.

The blue arrow points to the pin to remove the left hand controls. In most helicopters the pilot sits on the right, if you have a non-flying passenger it may be good to remove the controls so they can't accidentally grab it. The left side pedals are removable too.

Not the answer you're looking for? Browse other questions tagged radio-communications cockpit rotorcraft or ask your own question.

10
Is there a button that pilots push to transmit on the radio?
12
Why is it more difficult for ATC to manage a larger airliner?
5
How does the PTT button on the radio work?
13
Is there a convention for type of switch used and where?
2
How much lift must a helicopter rotor produce?
4
What steps are needed to communicate with ATC on an A320?
2
How are performance classes for helicopters/rotorcraft defined?
3
Does a dual-rotor helicoptor like the Chinook transition from hover to forward flight differently than a single rotor helicopter?