What operational aspects of Alphabet's Wing drone delivery service will be the same as that of an airline?

The NPR News article and podcast FAA Certifies Google's Wing Drone Delivery Company To Operate As An Airline begins with:

The Federal Aviation Administration has certified Alphabet's Wing Aviation to operate as an airline, in a first for U.S. drone delivery companies. Wing, which began as a Google X project, has been testing its autonomous drones in southwest Virginia and elsewhere.

"Air Carrier Certification means that we can begin a commercial service delivering goods from local businesses to homes in the United States," Wing said in a statement posted to the Medium website.

The article, plus the BBC News's Google Wing drones approved for US home deliveries indicate that Wing (owned by Alphabet, which also owns Google) will be he first US drone delivery company to be run as an airline.:

Question: What operational aspects of Wing will be the same as that of other airlines? They won't sell seats of course, but will the file flight plans for example? Will they have licensed human pilots to oversee the drone's flight?

The Wing company, a Google spinoff, has won federal approval to operate its drone delivery system as an airline in the U.S. Credit: Wing, Source 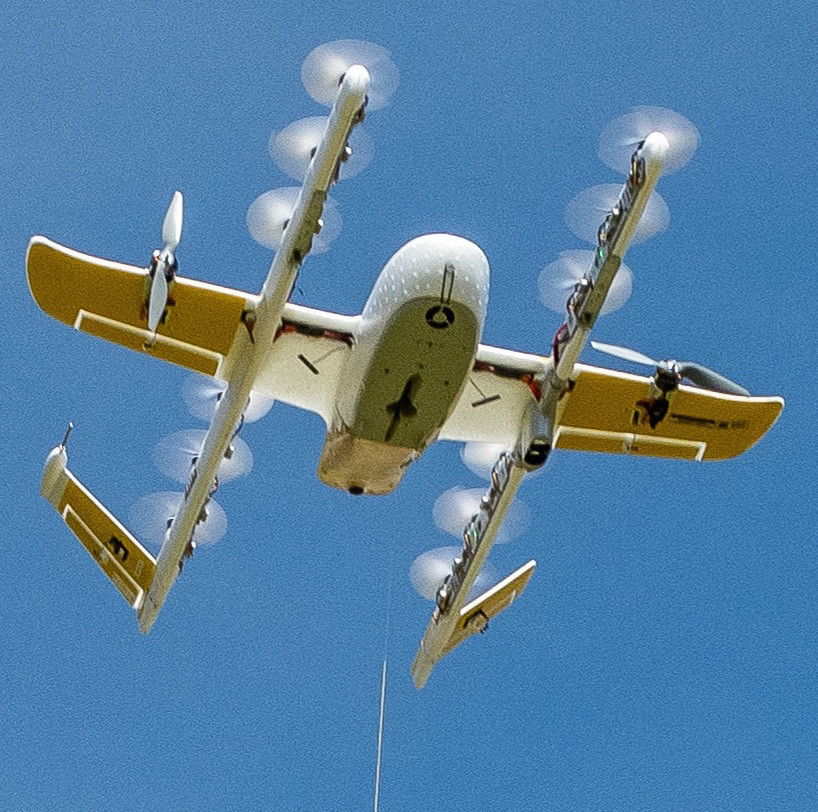 Customers who took part in Wing's drone delivery test program in Virginia approach their package after it was dropped on their lawn. Credit: Wing Source

Under FAR Part 117, only certified "air carriers" are allowed to sell "aviation services" to the general public. Certification means that the FAA has determined the proposed operations, whatever they may be, will be reasonably safe.

FAR Part 121 covers most scheduled air carriers, which are commonly called "airlines". These are the only air carriers that the media knows about, so it's understandable that they'd conflate the two.

FAR Part 135 covers unscheduled and very small scheduled air carriers. I suspect this is where Google Wing would fall, but I haven't seen anything definitive so far.

6
Why does Google's Wing drone have dimples?

11
What is this object that followed me up the street?
3
What percent of the world's airline operations are in the USA?
3
What is the difference between "R/C", "Drone", "UAV"?
4
What permits are needed to operate a human-flying drone in the United States?
5
What is the business purpose of scheduling two separate flights on the very same route with 5-10 minutes separation?
9
Can "a drone" damage the wing of "an aeroplane" to the extent it actually threatens its ability to fly?
5
What kind of drone might be able to fly so high that it "operate(s) outside national boundaries"?
6
Why does Google's Wing drone have dimples?
1
Can an airline schedule two same-number flights to leave the same airport on the same day?