This answer has a photo of a Mil Mi-26 that I felt in love with, so I looked in Wikipedia and learned it's the largest production helicopter, second only to Mil V-12 that flew as a prototype.

In turn, Wikipedia's V-12 article gave a link to the exact position where one of the two V-12 produced is placed, so I opened Google Maps and I had a satellite photo of the V-12!

So far so good, but when I zoomed out a little I saw many other helicopters parked around, all clearly helicopters except a cigar shaped beast, with winglets apparently too small for an airplane, in the upper right corner of the screen dump below, marked with an arrow... Remarkably I cannot see the shadows of the blades on the ground.

Could you please identify that object? 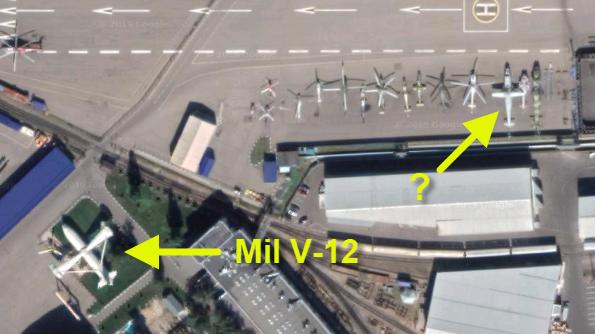 Looks like a Mil Mi-6 with the rotor removed (like the adjacent two to the right). Here is the 3-view drawing overlaid: 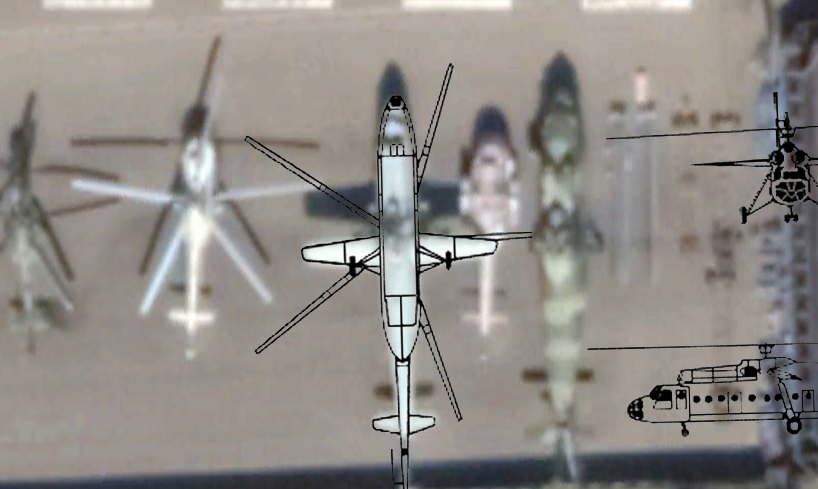 The tail boom appears to be thicker than it is due to the angle, it'll make sense by taking the satellite's perspective. Note the fatter bottom: 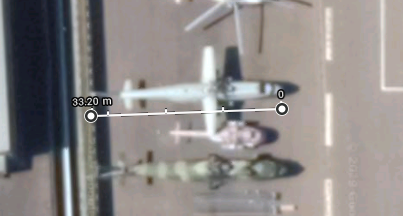 Not the answer you're looking for? Browse other questions tagged helicopter aircraft-identification soviet-union or ask your own question.

28
What helicopter has the most rotor blades?

3
What's the difference between feathering, and flapping in a helicopter?
6
What helicopter is this in The Walking Dead?
14
What type of helicopter is shown in Star Wars The Last Jedi featurette?
57
Can this helicopter/wrecking ball combo remain airborne?
25
What is this abandoned airplane parked in Tegel airport?
19
What is the definining line between a helicopter and a drone a person can ride in?
1
Closest RL Match for Fictional Helicopter Design?
2
Is the Mil Mi-2 still in production?
14
What aircraft are parked in this naval air station?
0
What is this helicopter seen in the Falcon Crest TV series?