Can the maximum thrust of a turbofan engine be estimated by its intake diameter?

I have no clue in aeronautics. How to estimate maximum thrust (at any rated condition, such as altitude, speed, rotation velocity- any given condition) by intake diameter?

You need to know one more parameter: How much fuel will be consumed per unit of time. In the end, thrust is created from heating some of the air entering that engine, and only if you know what proportion of air will be used for combustion can you make valid estimates of the thrust than can be generated.

What you can calculate from the intake diameter is how much air flows through the engine per time. The flow speed at the engine face is about Mach 0.5, almost regardless of aircraft speed, so the mass flow is strongly correlated with engine size. The plot below is from NASA TM-X 73,199 which lists statistical data on weight and dimensions of turbofan engines. Unfortunately, it is now more than 40 years old, but the laws of physics have not changed since then. 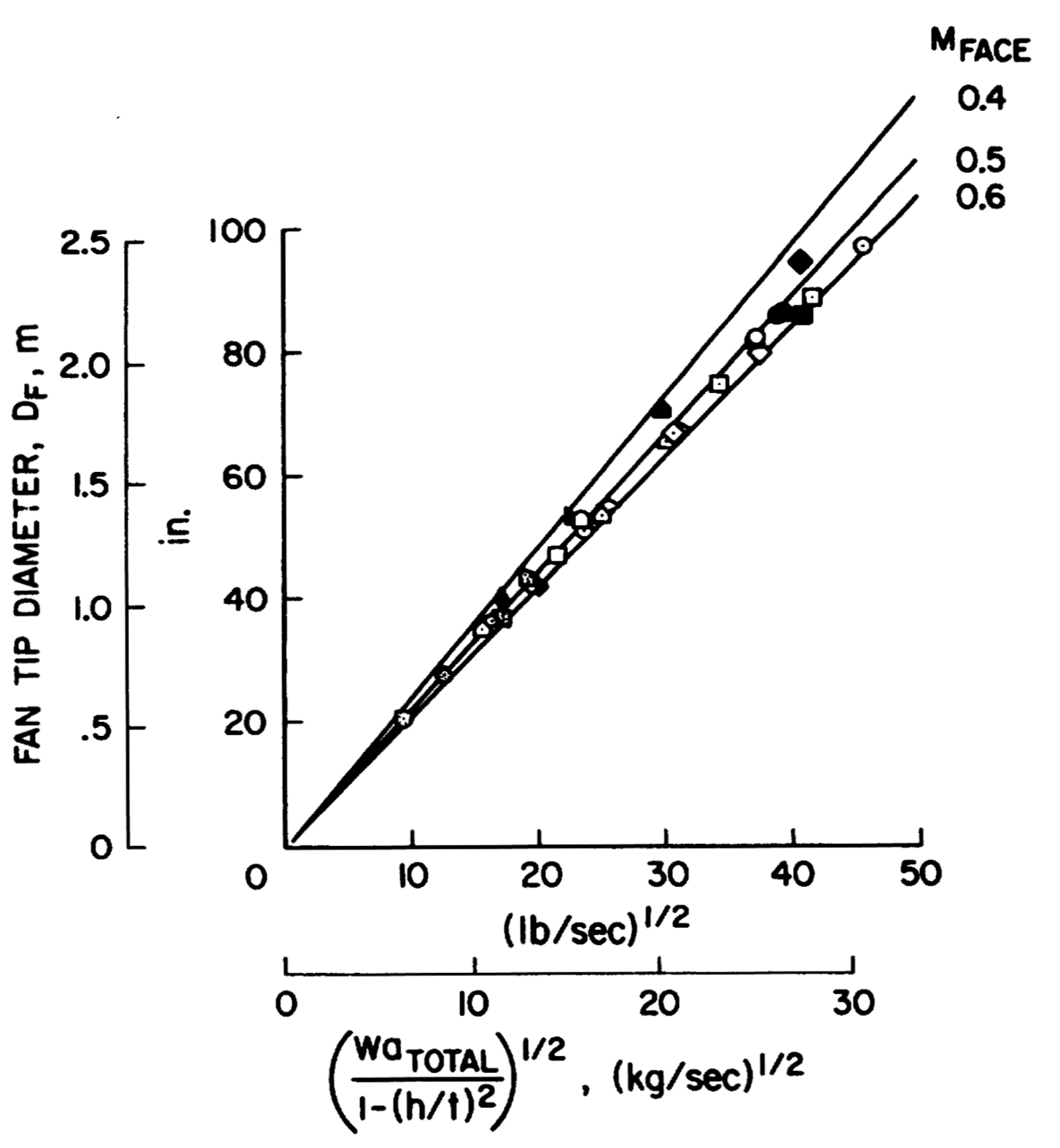 Correlation of intake diameter with the square root of mass flow from NASA TM-X 73,199. Wa is the air mass flow and h/t is the hub-to-tip ratio of the fan. $\left(1-\left(\frac{h}{t}\right)^2\right)$ is proportional to the effective fan area.

Now this uses fan diameter, not intake diameter, as the basis for the correlation, but those two dimensions are closely correlated, too. For a first order estimate, you can assume $D_F\cdot\sqrt{1-\left(\frac{h}{t}\right)^2}$ to be equal to the intake diameter.

The next step is to get a grasp on the ratio between core flow (which is available for combustion) and secondary flow (which only goes through the fan and exits the engine without being heated by combustion). This ratio is called bypass ratio (BPR) and has grown over time from 0.25 for the RR Conway, the first operational turbofan from the late Fifties, to 11 for the newest version of the CFM LEAP-1A engine on the A320 NEO. Core flow is Wa/BPR.

The fuel-to-air ratio of turbofans is roughly constant at 0.03. Given the bypass ratio you can now calculate the fuel flow and then continue to the thrust by using the specific thrust (thrust per unit of fuel) from sources like Wikibooks or statistical analysis. Note that specific thrust changes with aircraft speed, altitude and bypass ratio! 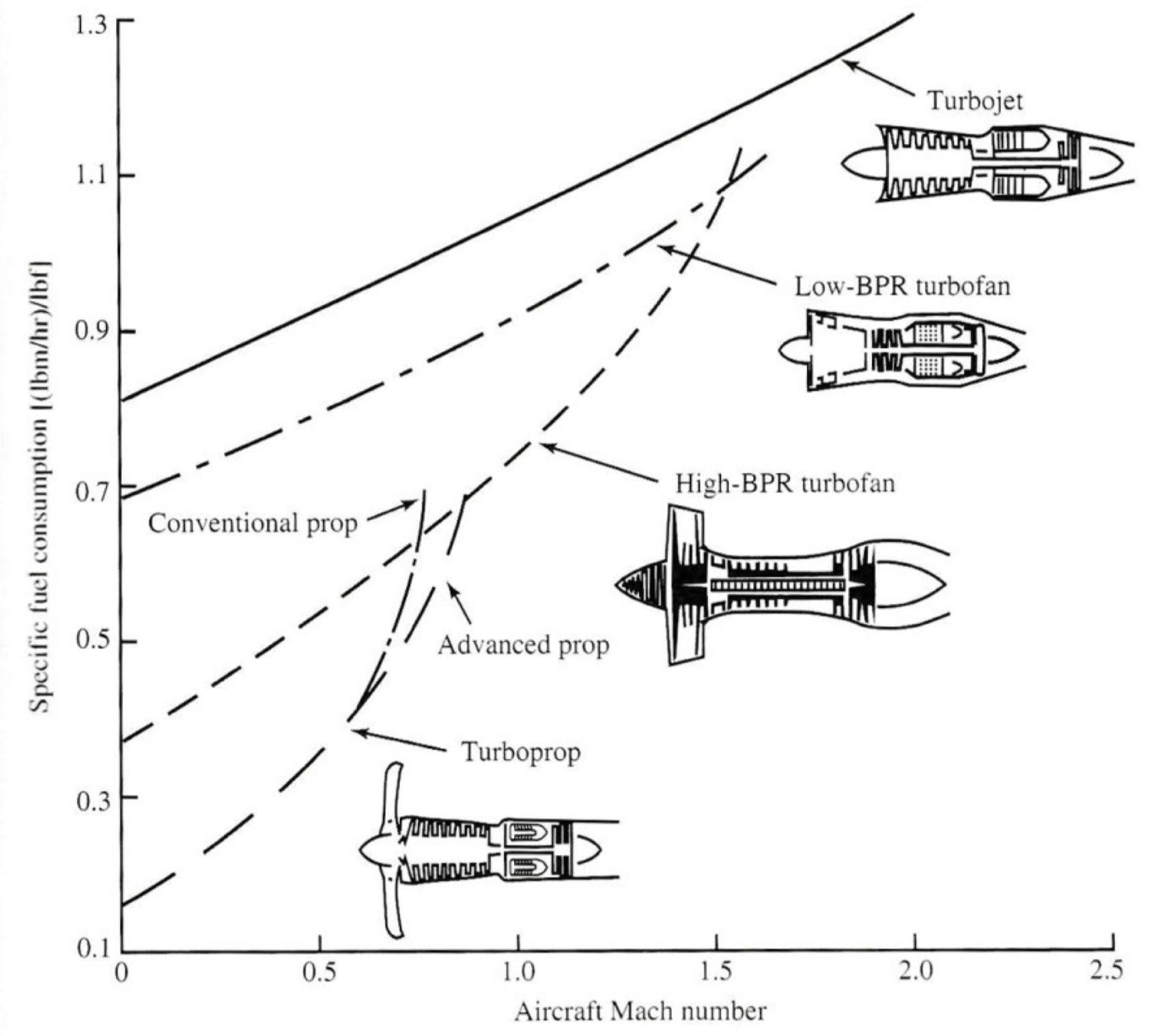 Not the answer you're looking for? Browse other questions tagged jet turbofan thrust or ask your own question.

4
Does the P&W F100 turbofan engine of the F-16 really produce this much power?
3
How does the power distribution change for a turbofan engine from being stationary to going at full speed?
1
Can someone please tell me all the units for the propeller thrust equations?
2
What is the GE90-115b turbine power output in horsepower?
2
How can I calculate the relationship between propeller pitch and thrust?
2
Is it true that high-bypass engines are inherently inefficient at higher speeds?
2
How does altitude affect the TAS and thrust of an electric fan powered aircraft?
0
Electric ducted fan with thrust tube thrust and exit velocity calculation