What is the definining line between a helicopter and a drone a person can ride in?

When I say drone in this context I don't mean an unmanned aircraft. I'm not sure what the terminology of a drone that has been adapted to carry a person? Is this picture below considered a helicopter or what? What if it ran on petroleum? 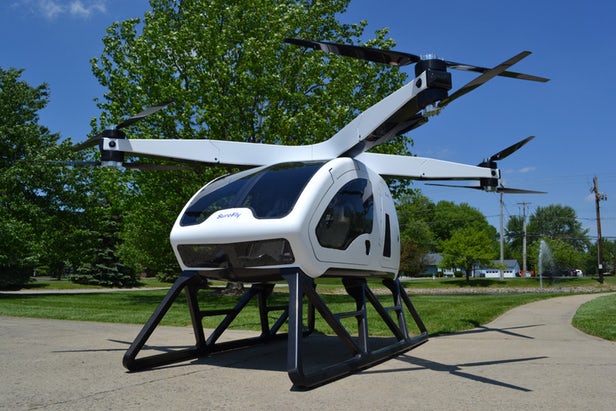 If not, then how is the separation between a VTOL aircraft and helicopter defined?

Would a Chinook that can fly itself be a drone?

A helicopter is an aircraft in which thrust and lift are provided by rotors.

A drone is an unmanned, self-piloted or remotely-controlled aircraft, which can use rotors to provide thrust and lift, but can also use other means such as propellers or turbines.

To put it in simpler terms, a helicopter can only be a helicopter, regardless of whether it has a human inside or not. A drone can be any kind of aircraft.

I would just call it a VTOL aircraft. Those kind of multi-rotor VTOLs do kind of blur the line between VTOL and helicopter, but a practical way to define them could be to separate them by a key capability; the ability to glide.

A helicopter has a rotary wing that is driven forward by a power source like an airplane, but can also change pitch and glide downhill, like an airplane. A rotor is just two fuselage-less airplanes joined at the wingtips being driven in a circle by a twisting force applied at the wing tip instead of a propeller out at mid span.

A multi-rotor VTOL with small fixed pitch rotors can't glide, which is why you won't get me in one unless it has multiple levels of redundancy with NO single-points-of-failure or double-points-of-failure modes for that matter (like say being able to take damage to both rotors on one corner for example, and still maintain control).

There is no automatic separation between the two, it is possible for an aircraft to be both a drone and a helicopter. Drone only refers to how the vehicle is piloted, and helicopter only refers to how it flies. (Battery vs petroleum vs any other power source is a third, separate modifier, too.)

The vehicle in your picture is an unmanned aircraft, a drone, a helicopter, a quadcoptor, and a VTOL vehicle all at once.

(Note: Unmanned means not having any crew on board. You can still have passengers, they don't count.)

When I say drone in this context I don't mean an unmanned aircraft.

Drones are unmanned aircraft which can receive flight path control (rather than controls directly affecting the control surfaces/rotors). Method of generating lift, engine technology and size are not a factor - after WW1 some biplanes became drones and various air forces have converting more modern end-of-life fighters to drones, either for attack or for target practice.

I'm not sure what the terminology of a drone that has been adapted to carry a person?

Is this picture below considered a helicopter or what?

What. I'd call it a rotorcraft (UK terminology used, e.g. in CAA larger UAS guide), or more specifically a large octocopter.

I tend not to call things helicopters if they don't have helicopter controls (cyclic and collective driving a swashplate), but I can't find an authority on whether that is what makes a helicopter. Electric multi-rotor craft use differential rotor speed to manoeuvre instead.

What if it ran on petroleum?

I suspect it would fall out of the sky - it would be hard to get the control responsiveness from eight small petrol engines or one large one and an eight way variable transmission that would allow it to be stable. You could change it from an octocopter to an eight rotor helicopter by adding swashplates, but with the other changes to make that happen it would be a different thing.

28
What helicopter has the most rotor blades?
1
What causes a helicopter to autorotate farther?