What were the Concorde's emergency procedures for an uncommanded droop-nose extension in flight?

The Concorde had a droop nose, which swung down during taxi, takeoff, and (especially) landing, so that the pilots could see where they were going without the long nose getting in the way. During cruise, the nose was raised to the horizontal faired position, and held there by a pair of mechanical latches; the nose (as well as a heat-resistant visor that slid in and out of the nose) were normally raised and lowered by means of hydraulics, but could also be dropped by means of gravity if need be.

While obviously essential for landing, takeoff, and (to a lesser degree) taxiing, I'd imagine that the nose drooping uncommanded during supersonic cruise (for instance, due to a failure of the nose uplocks, or a nose droop actuator hardover sufficient to break the latches and force the nose down) would have been a Bad Thing, due both to the nose-down pitching moment generated by the drooped nose1 and to the windscreen suddenly no longer being protected from the superheated air flowing over the aircraft (probably in addition to some other things that I haven't thought of).

1: I've no idea if this would be sufficient to cause a loss of control if it happened during supercruise, but it could hardly have been a good thing.

As commented, reducing speed (and replanning flight) is all there is to it. From the Concorde abnormal procedures:

The nose has three positions:

Holding the nose at 12.5° requires hydraulic pressure. If hydraulic pressure is lost, the crew can manually release the two uplocks, and the nose (and visor) would fall and stop at the 5° position – two additional jack uplocks stop the motion at 5°. 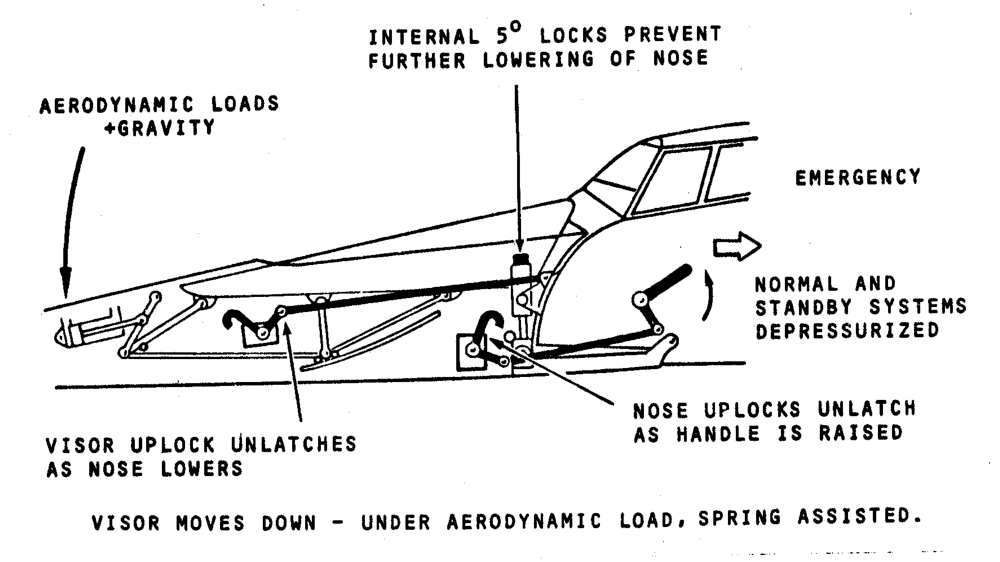 Not the answer you're looking for? Browse other questions tagged emergency-procedures concorde nose or ask your own question.

24
In what way are the Concorde's engines considered efficient?
14
Why did the Concorde require a droop nose and how did it work?
5
What would have happened when the Concorde's low-pressure emergency system brought it lower mid-flight?
3
What were the procedures to follow in US Airways Flight 1549 during descent?
10
Do commercial airlines have procedures for evacuating pets from the cabin in an emergency?
4
What was the speed limitations for droop nose on the Concorde?
7
What are these hexagonal things under the Concorde's neck?